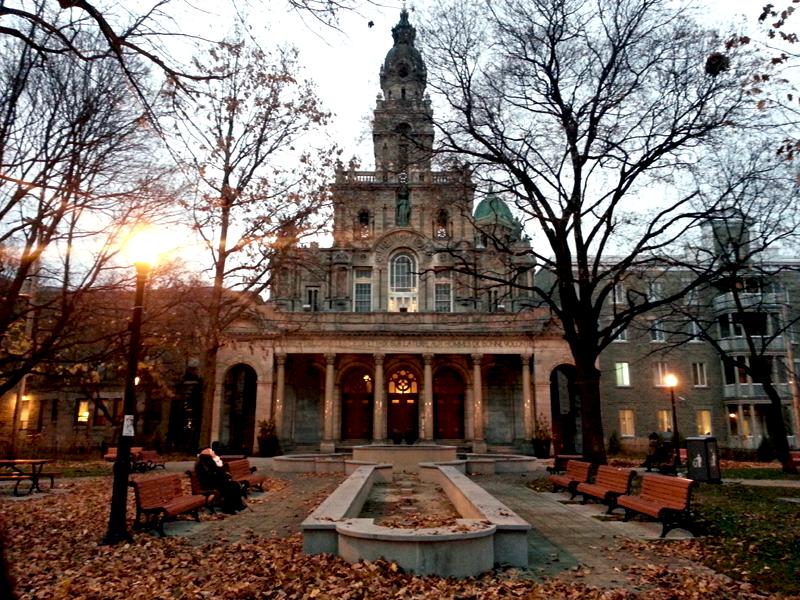 “Is the venue accessible to people in wheelchairs?”

A simple question posted on the Facebook event page for this year’s edition of the long-running small press and zine fair Expozine, which takes place Nov. 14–15 at Mile End’s Église St-Enfant Jésus, received an honest answer: “Not really, sorry!” replied organizer Louis Rastelli, noting that the venue — the basement of a 150-year-old church — gets crowded, recommending to come early in the day when it’s less busy.

It was this exchange that started a snowball rolling, leading to an 11th hour debate about accessibility — how to provide it, who’s responsible for it, and how to respond to requests for information and accommodation — that quickly became intensely heated.

Over the next few days, the online conversation that began with a request for organizers to provide information about the venue which would help people living with disabilities and other accessibility concerns make informed choices about whether or not they would be able to attend — concerns which the organizers admit were handled poorly — had escalated into a toxic storm of misunderstandings, accusations, insults, aggression, marginalization, shaming, tone-policing and other hallmarks of Internet comment threads that left accessibility advocates and Expozine community members alike hurt and exasperated, and which threatened to shut the popular event down completely.

In order to better understand the requests of people who are marginalized by inadequate infrastructure and social conditions such as ableism and cissexism who are speaking out about their needs, as well as the challenges faced by event organizers to respond to these needs for greater accessibility while working with a limiting stock of outdated infrastructure, we reached out to Expozine organizer Louis Rastelli and accessibility advocate Aimee Louw to share their perspectives with us.

Both have called for greater support from the city and other levels of government to help older venues renovate and modernize to be able to provide better accessibility. We have also reached out to the office of Mile End borough (in which the Expozine venue lies) councillor Marie Plourde for input, and we will update this article if and when a response is received.

Rastelli, with a small team of colleagues, has organized Expozine each year since 2002 as a way to support and promote small-scale and DIY published works like zines, comics and small-run books. Expozine also serves as an important part of Archive Montreal, the organization founded by Rastelli to preserve the ephemera (zines, posters, recordings and the like) of Montreal’s creative communities, collecting artifacts of Montreal scenes that go back decades and storing, cataloguing and digitizing them from a Mile Ex loft. Expozine supports the archive in two ways: by serving as a central source for collecting materials to add to the archive, and financially, as revenues from Expozine weekend account for a large chunk of the archive’s yearly operating costs.

“The issue of accessibility never came up before last year,” Rastelli tells me, “largely because we have had people in wheelchairs both table at Expozine and visit it without any problems in the past. We do what we can. We have also for years asked the church where they are at with plans to get some ramps in. They have had experts come and estimate what it would take for a minimal accessibility conversion. It is not very easy — it would require a lot of renovations before getting to installing ramps etc, and it would cost a fortune.”

Rastelli goes on to add that finding other venues that are equally large and affordable as the church basement is also not as easy as it sounds. “They suggest having us move to where the Anarchist Bookfair is currently held,” says Rastelli, “but that space is less than half the size of where we are. It would be very hard to justify cutting out over 100 spots at our fair.”

Another organizer who produces events year-round told me off-the-record — out of concerns that the wrong words quoted could result in their events being targeted by what they describe as the “Internet outrage machine” — explained how difficult it can be to secure venues that meet requirements for accessibility for all communities, which, in an ideal world, include ground-floor, stair-free access or elevators, as well as wide doorways for those with physical disabilities, single-occupancy gender-neutral washrooms for queer, trans and gender non-conforming communities, and access to quiet space for those who are neurodivergent or who may experience anxiety in crowded or uncontrolled environments. Spaces that meet these needs exist, but are often prohibitively expensive, in high demand or otherwise unavailable due to a variety of logistical reasons that are not always obvious to the general public. “Anyone who thinks it’s easy,” they said, “has never organized a large event.”

Expozine has been held in the same church basement for years, but the organizers have long understood that it’s far from an ideal space. “For six or seven years now we’ve tried to get the word out that we’re looking for a larger space.” Rastelli tells me. “We’ve tried to form a lobby with the other fairs like Puces POP to raise the issue that the wider Plateau / Mile End / Mile Ex area could really use a decent large modern space for large craft fairs, exhibits, zine and book fairs.”

For accessibility advocates like Aimee Louw, who penned an open letter to Expozine organizers after learning that the zine fair’s venue was not accessible (that’s been endorsed with about 300 signatures as of this writing), it’s important that event planners be proactive in ensuring their events are as inclusive as possible even when governments are slow to invest in infrastructure improvements.

“There was a trend on the Facebook thread where people were saying ‘Talk to the city, don’t bring it up with organizers,’” Louw tells me over the phone, “but those things aren’t mutually exclusive at all. A lot of that work is already being done by disabled people and it’s important to recognize that that activism is happening. But we can do both, and if we work together on it, there’s that much more likelihood of us succeeding and making an accessible cultural scene.”

Louw had originally signed up for a table at Expozine to display her own zines, Underwater City, but changed her mind about participating after realizing the venue could not accommodate everyone.

“The content of my zines is about changing ableism, so I don’t want to table in spaces where other disabled people couldn’t come,” Louw says. “Even if I technically could access the space, it takes a physical cost for myself, and then I’d be separating myself from my partner and my community and other disabled people. I was wondering how to best address it, so I thought that I would write something that would explain things from my perspective and hopefully show the importance of having cultural events like Expozine be accessible. I wanted to show that there is a public interest for accessible cultural events, so I made it an open letter and offered the space for people to include comments by their name if they wanted to.”

Despite the tensions that grew on social media, Louw’s goal has never been to shut down Expozine, only to make it more inclusive so that everyone can participate. “The whole discussion on Facebook started from a question, which was ‘is the venue accessible?’” Louw notes, “And to see it spiral into a flurry of hatred was horrible. It’s not necessary to talk like that.

“I certainly don’t see us on opposite sides on a battle or anything.” Louw adds. “I would love to talk with Louis and the other organizers and share some of the knowledge that I have about accessibility, because it is an area where they are learning. I’m actually really excited by Louis’s proposition to advocate with the city. He’s quite well known, and Expozine and the Archive Montreal crew do a lot. I think that adding their voices and other cultural curator’s voices to the growing pressure on different levels of government will help greatly.”

Louw points towards Montreal’s Radical Accessibility Audit Project (RAAP), a crowdsourced, growing online database of accessibility information for venues all over town, as a resource for event planners who are committed to accessibility.

For Expozine organizers, the past few days have been a crash course in accessibility issues as well as social media relations. Following an initial reaction that was somewhat clumsy and defensive, for which Rastelli has posted an apology, the online debate seems to be moving into more constructive territory. Let’s hope that going forward, organizers and community members can find ways to work together to make all types of cultural events in Montreal inclusive for all, with meaningful participation from marginalized communities, while remembering that behind those online avatars are real human beings.

Read about some of the special events and addition to this year’s edition in our article here.