The Cinemania Festival, which presents French films with English subtitles, runs through Nov. 15. Here are two film screening at the festival for the first time today.

If you think that the white-saviors-of-Africa as protagonist is tired at best and deeply inappropriate at worst, you might think to skip over this tale of NGO workers who go to war-torn Chad to save orphans. That would be a mistake, as Les chevaliers blancs is a deeply ironic title that’s tremendously appropriate for this blackhearted exploration of toxic altruism. Vincent Lindon stars as the leader of a dubious organization that lands in Chad claiming they will build a school for the orphaned children under five of the community. What they’re actually doing is rallying young children to bring back to France as foster children and eventual adoptees for a hefty fee.

Things immediately go to shit as the village elders smell a profitable venture and essentially attempt to sell non-orphaned children to the NGO. The remote location makes it impossible to get the plane they need to return to France with the children, and a reporter (Valérie Donzelli) captures the team at their most fragile and volatile, forcing between the well-meaning and the psychotically altruistic. It’s a deeply cynical film that probably simplifies the actual situation a little, but director Joachim Lafosse’s even-keeled direction and studious avoidance of misery porn tropes makes this one of the most surprising and deeply miserable film experiences I’ve had this year. 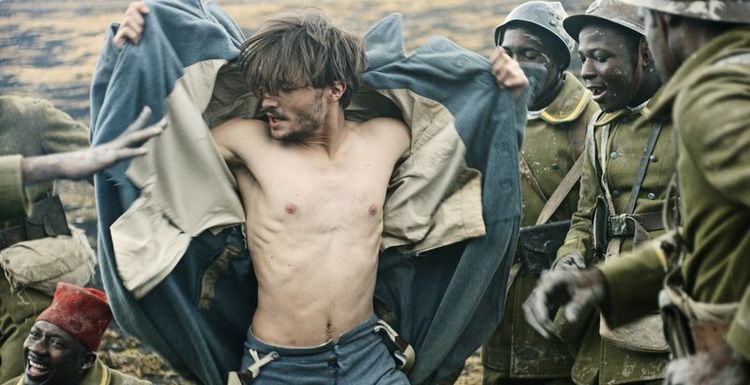 Nothing has done more destructive work for illogical perceptions of films in my mind than the infamous Canadian Heritage Minutes that permeated television in my youth. The second something even remotely reminds me of one of these patriotic cheeseballs, I have a lot of trouble perceiving anything else. I don’t know what it is about them: the gung-ho, dewey-eyed patriotism, the attempts to make a lot of limited means, or the general “here is an important thing that happened to some old-timey people” tone that it takes, but there’s something of it in Damien Odoul’s Quebec-shot La peur, an ambitious adaptation of Gabriel Chevalier’s WWI novel.

The aesthetic choices aren’t necessarily enough to sink this often trippy tale of a young soldier (Nico Rocher) who initially craves the battlefield only to find that fighting for your country is a hellish, violent and pointless endeavour, but they start the film off on the wrong foot. The budget constraints mean everything is kept pretty spare, and the film uses wall-to-wall voiceover (presumably for the book) that gives the film an icky public-television sheen (in a bad way). The film picks up steam as it goes along and the battlefield becomes increasingly surreal and alienating. Unfortunately, I found it impossible to completely shake the aesthetic reminiscent of things we were forced to watch in history class when the teacher was hungover. Those of you with a more tolerant outlook may feel differently.