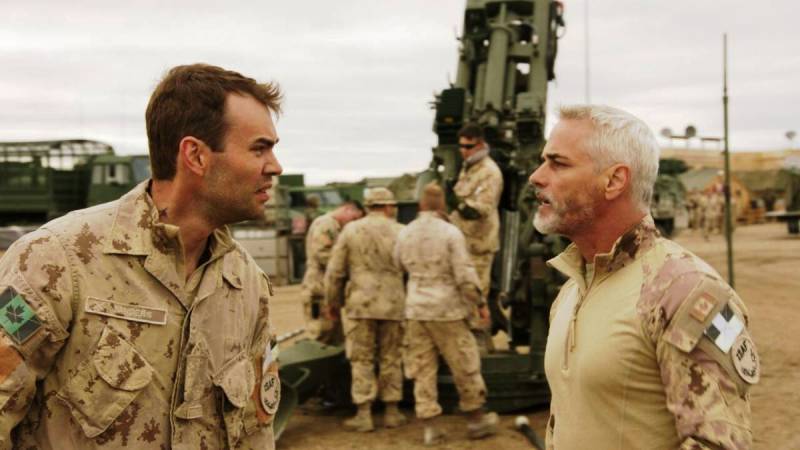 It’s often been said that the Canadian identity is characterized by the condition of not being American. But for many people, “the war on terror” and trans fats have replaced baseball and apple pie when it comes to defining the American identity. And just like America’s old pastime, modern warfare (and its victims) has provided ample material for the big screen.

But for Canadian directors and actors, how does one approach the war film genre? And why, as we learned this week in The Globe & Mail, did film distribution company Elevation Pictures spend last spring testing different posters (prepared by the Los Angeles-based movie marketing company Art Machine) for Paul Gross’s new Canadians-in-Afghanistan war drama, Hyena Road.

Elevation Pictures’ solution was simple: go easy on the patriotism. Make sense? Well, let’s put it this way: we (at least in the province of Quebec) probably have a bigger tendency to associate the Canadian Army with stories such as Romeo Dallaire’s Shake Hands With the Devil, Francis Dupuis-Déri’s  L’armée canadienne n’est pas l’Armée du salut, the now classic ’90s Bye-Bye skit “L’armée cacanadienne” or… a certain crisis in 1970.

I spoke with director/actor Paul Gross and actor Rossif Sutherland to try and make sense of their preparation for this film, their research process and the various reactions soldiers have had at screenings.

Ralph Elawani: Paul, since there is a tradition of military service that goes back a few generations among members of your family, how much of a role did your personal background play when you wrote the film? Especially regarding the moral complexity of war.
Paul Gross: My dad was in the military and my grandfather fought in the First World War, but to be honest, I was never really militaristic.  I actually didn’t think I’d do another war film [Gross wrote, produced, directed and starred in WWI drama Passchendaele in 2008]. I was invited to go on a trip to Afghanistan to visit the troops and entertain them. And that changed my perspective. It had no relationship whatsoever with what you are being told by the media or the government. Then I went on a second trip and started photographing what I saw. I felt compelled to tell the story of these men and women.  I was ignorant of what was expected of the military. Modern warfare is a complicated beast.

RE: The opening sequence shows a Taliban who gets gunned down, falls to his knees and assumes the same position as people who are getting decapitated by jihadists. Can you tell me about that?
PG: That scene was inspired by photos I saw that were taken by snipers. I mean photos that were taken to report on the operations, not meant as trophies or anything. And I thought these pictures looked strange and the religious aspect spoke to me on various levels. It was something that transcended language: death, the fatality of it; it’s partly for the same reason I chose not to translate the dialogue in the last scene of the film. 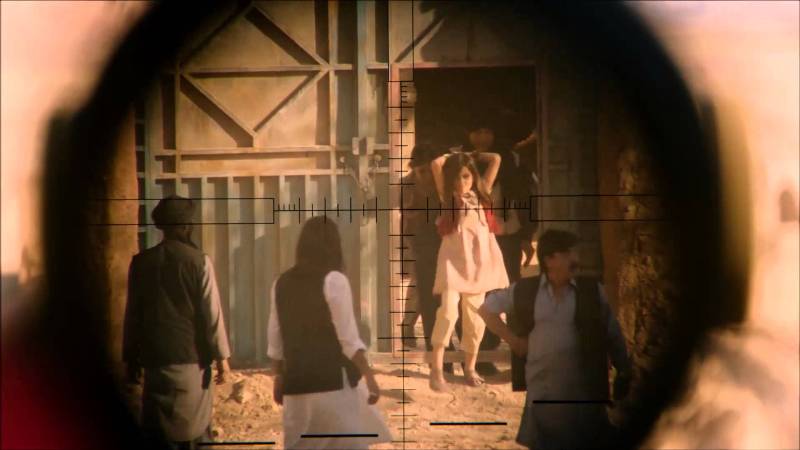 RE: Karim Hussein’s cinematography is remarkable. How was your experience working with him?
PG: I adore him. I think he is a genius. We shot this film in 30 days. I think it would have been impossible to achieve without him. Karim is able to do wonderful stuff out of very little.

RE: The character who’s referred to as “the Ghost” is also referred to as “the Lion of the desert.” Was it a direct reference to Moustapha Akkad’s 1981 film of the same title [The Lion of the Desert – starring Oliver Reed and Anthony Quinn as Libyan tribal leader Omar Mukhtar]?
PG: No, actually this character is based on a true historical figure that the Russians kept referring to as “the Ghost” because he could neither be killed nor captured. I had the chance to meet him and to speak with him. An impressive guy. Those eyes! The man we cast for his role [Neamat Arghandabi] was a mujahideen at some point in his life. He’s not an actor. He was a guy who worked with us and the coalition in Afghanistan.

RE: Rossif, your character [Ryan] is pretty much the only one who engages directly – both on a physical and psychological level – with a female character [Jennifer, a dispatch officer played by Christine Horne]. I’d be curious to know if women or men came up to you after the screenings to either ask you about the place of women in the film (both Afghan and Canadian) or share their personal stories.
Rossif Sutherland: No, actually, nobody came up to me with stories or comments. I know the type of romance depicted in the film [dating someone in a position of higher power in your chain of command] is not allowed, so I understand soldiers not wanting to disclose such personal stories.

RE: Hyena Road is dedicated to the Wounded Warriors of Canada. I know you’ve had the chance to take this film on the road and to screen it in front of members of the military. How was their response?
PG: The response has been unexpected, emotionally stirring and disturbing. We had battalions of people giving us advice on the field, but I never thought we’d have such response. I think it was purgative for a lot of the soldiers and veterans who saw it.
RS: Watching the film with soldiers and seeing some of them holding back tears… All you wanted to do was reach out to them. I mean there’s so much humility and bravery in many of these individuals. All we do is make believe when we make a film, but you end up caring about the people you’re playing.

RE: So how did you prepare for this role?
RS: I auditioned for this part three weeks before we started shooting. To be honest, I thought I’d have six months to try to become a soldier: the physical training, weapon training etc. When I got the part, all I had in my mind was, “I think you miscast me, I’m not THAT guy you see in videogames.” I was relieved when I got to spend time with soldiers and learn about their life and understand they’re not different from you or me. Many of them are young men and women looking for a sense of belonging. The weapon they carry was pretty much a shield. I could relate to that: looking out for your friends. ■