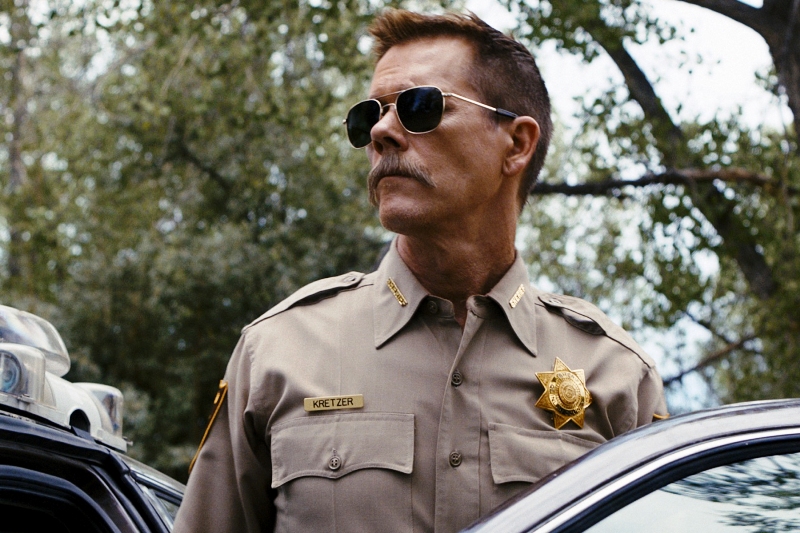 “Dreamlike” isn’t the first adjective that comes to mind when you watch Jon Watts’s Cop Car, a muscular thriller that screened at the Fantasia Festival in July and is now available for home viewing. It’s sleek, pared-down and brutal, a far cry from the off-kilter Lynchian images that one usually associates with dreamlike filmmaking. Yet Watts says the idea came to him in a dream.

“It’s all based on a recurring stress dream that I’ve had since I was a kid,” explains Watts. “I grew up in Colorado — that’s my hometown in the film — and ever since I was about 10 years old, I’ve had this dream where I’m in the passenger’s seat of my mom’s car, driving around, and my friend Travis (who’s also 10) is driving. We’re going around town and we’re passing people who know us and they’re not saying anything. We’re not stopping and we’re going faster and faster and then I’d wake up. (…) I was telling Chris Ford, who I write with, about that dream; I thought it was an evocative image for a movie. He said, ‘What if it’s a police car?’ and I said, ‘Well, whose police car is it? and then we thought ‘Well, now we have the story.’”

Cop Car’s protagonists are two 10-year-old boys (James Freedson-Jackson and Hays Wellford) who are on the kind of quest that 10-year-olds in the country tend to go on; aimless walks in the wilderness, using sticks as guns and talking authoritatively about topics they have absolutely no familiarity with. The boys happen to come across an unattended police car in a clearing; a little bit of poking around reveals a set of keys, and soon the boys are joyriding the car on the deserted Colorado roads. This puts Sheriff Kretzer (Kevin Bacon), the owner of the car, in quite a pickle, since he had left the car unattended to go bury a body in a shallow grave — and a second body remains locked in the trunk. 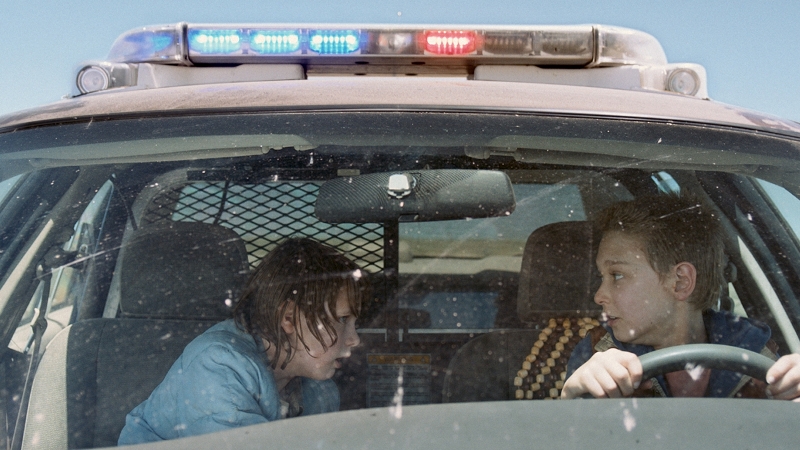 For Watts, the film’s MO was always to keep things as simple as possible. “You’re just in it and then you go,” he explains. “There’s no backstory, you never meet the kids’ parents…” I point out that the simplicity also extends to the characters of the children, who are not movie-child precocious but realistically child-like. “Kids in movies are always either an adult projecting ideas on a little kid or they’re a cute little kid with hilarious wisdom and wisecracks,” Watts agrees. “I remember being 10. I wanted to be honest with the feelings of being in that situation and trying to figure stuff out.”

“That thing where people go, ‘Oh, kids are the worst to work with’ isn’t true,” Watts continues. “They’re so great and spontaneous and weird and just being themselves. It’s the same thing — they’re 10. They know they have to say their lines and all this other stuff, but they’re also totally distracted by what’s going on. My job is really just to keep them focused and keep their energy up — because the moment my energy drops, they’re done. Forget about it. So I just have to be sort of their cheerleader.”

Watts extends the same courtesy to Bacon. “He’s the best! He’s amazing,” Watts says. “Here we are in my hometown, driving around on this little loop that’s basically the loop that I would take to go to school and I’m sitting in the passenger’s seat with the DP and the camera… and I’m just filming Kevin Bacon. It’s just us, we’re just driving around — there’s no crew to be seen! He’s such a down-to-earth, nice guy, so smart and articulate about acting and the character that you forget he’s Kevin Bacon. He’s just this person that you’re working with, and then you look down at your monitor and you remember, ‘Oh yeah, that’s Kevin Bacon. Movie star Kevin Bacon.’”

“There was nothing on the page about the character. We purposely wrote it as simple as possible,” Watts continues. “Him and I talked a little bit about the character, then he went and created the character with such extreme detail that when he showed up on set, it was amazing. He does so much work preparing, and everything is a smart, conscious, character-based decision — down to all the physicality.” That extends to the character’s unmistakable moustache — a choice that Bacon made all on his own. “I think that secretly in my heart I hoped that he would grow a moustache, but I didn’t want to push a moustache on him,” Watts laughs. “It wasn’t just the moustache or no moustache — it was exactly the right kind of moustache. He brought his own moustache.” ■
Cop Car is available on Blu-ray and DVD now