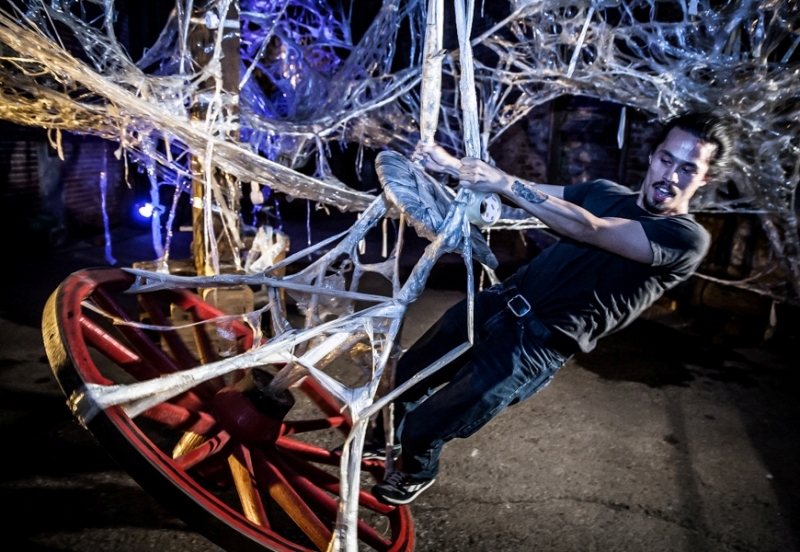 A previous incarnation of #boxtape. Photos by Svetla Atanasova

A lifetime supply of packing tape is waiting within Griffintown’s Paper Factory, waiting for participants to enter and help build a gargantuan labyrinth that a growing audience can dive into, play in and continue to add to, finally filling the almost 7,000 square-foot wooden loft.

Everyone who attends the event is handed a roll of packing tape and a few rules before they contribute to the minimal skeletal structure that Montreal artist Peter Trosztmer and his team have already installed. The structure will eventually be built up into objects like diamonds, bridges, swings, houses and hammocks — stalactite-like free-hanging structures made by the public and participating specialist artists during the seven-day event (five days to the public).

Presented by Tangente dance studio as well as the Phénomena Festival, #boxtape was conceived by Trosztmer, who’s a choreographer and performer. The piece, which has had previous incarnations (as you can probably tell from the photos of a finished structure), is being presented as a performance, not merely an installation.

“We are not doing it in a theatre or a place where people are familiar, to turn off and watch,” Trosztmer explains, “but rather you are immersed in environment and so you have to be active, you have to be aware of yourself in relationship to the space and each other.

“There’s hospitality that goes along with the work, too. We try to get you to engage when you want to, how you want to, and try and provide comfort to go along with that. There’s food and there’s drink, there’s actions and conversations, lots of different things happening at the same time. If you look one way, this really crazy thing is happening — a guy jumped on this (tape) thing he just made, and he is spinning around, and it is really beautiful and fun, and then someone is swinging on a swing, and then you’ll get involved.”

The collectively created #boxtape structure will become a thing of crystalline beauty, with light reflecting off and shining through the massive art piece. In its final stages, it might come to resemble attempts by 1970s artists to create “total environments,” or the process might bring about something completely unexpected.

The setting for #boxtape, within one of Montreal’s 19th century carriage houses, was formerly home to the gas meter for the 19th century New City Gas Company. With its churchlike stone structures and vaulted wooden ceilings, the Paper Factory is a breathtaking space that will only be enhanced by the finished structure.

With its relatively simple premise, the web-like #boxtape work can be considered a new monument (albeit a temporary one), or at least mine the definition of what a monument really is, and can be. ■