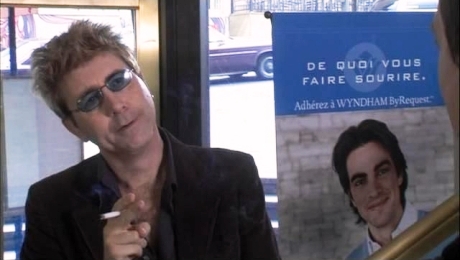 Does Montreal play itself? Yes! Not only that, but the much-maligned Montreal World Film Festival plays itself as well. Needless to say, it does a better job of playing a film festival here than it did in real life this year.

Most egregious local landmark: This is not the kind of film that allocates a budget for location shooting, sets or anything even remotely complex. Most of it takes place within the hotel the characters are staying at, though bits are filmed in the now-defunct le Parisien theatre on Ste-Catherine and at the port. (Only the exterior and hallways of the Parisien were used — the screening room used in the film is actually Concordia’s J.A. de Sève screening room.) 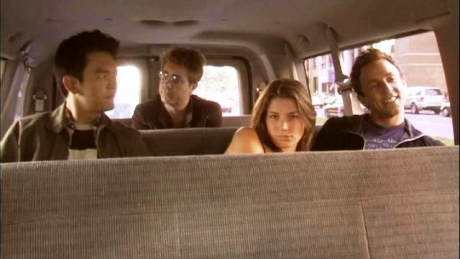 Notable local talent: Both Jessalyn Gilsig and Jessica Paré (who plays the film-within-a-film’s pill-popping lead actress) are Montreal natives, though I’d argue Gilsig already belonged to L.A. at the time since the film was made just after her run on Boston Public and in the midst of her recurring gig on Nip/Tuck. The supporting cast is mostly local but also mostly obscure; many rarely worked again, though character actor Jean-Pierre Bergeron has a bit as an alcoholic actor and local actor/jazz saxophonist Charles Papasoff has an even smaller bit as a drug dealer late in the film.

Part of the archeological research that constitutes this column is purely for my own pleasure. I enjoy combing through IMDB and finding forgotten obscurities so much that I even had a podcast about it, and I’m mostly aware of most movies that were shot here through the sheer repetition of combing through IMDB repetitively. I knew about See This Movie on some level, but I had completely filed it away deep in the recesses of the useless things I know about. It’s only upon my research for the on-going Montreal World Film Festival series that I came upon it once again: a film actually set and shot at this perplexing festival — starring Late Night host and former SNL head writer Seth Meyers, no less. Obviously, this was going to become a Made in MTL. 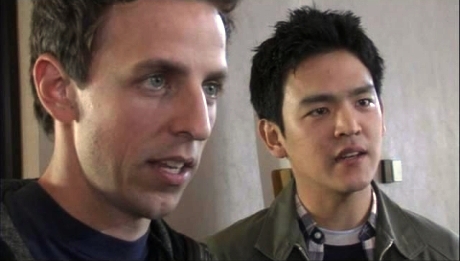 It seemed like a difficult prospect — See This Movie is the kind of movie that you find when you don’t want it (rooting through those shit DVD bins at Canadian Tire or the drugstore) but will never come across if you do want to see it. It’s not going to show up on Netflix, it’s not likely to be on TV, it’s certainly not the kind of thing that one of the few fledgling video stores left in town has felt the need to hang on to for 10 years. It was looking pretty grim until I remembered Amazon.ca, fine undercutter of book prices and depository of unwanted DVDs of Being Julia. I ponied up the princely sum of a single Canadian penny and soon, the wait was over: I had this incomprehensible semi-mockumentary set almost entirely at this most maligned of festivals.

Jake Barrymore (Meyers) has been rejected from every prestigious and less-prestigious film school in the country. The only training he’s managed to complete is a three-day film class taught by a sadsack editor named Martin Hughes (Jim Piddock). Upon graduation, Jake and his friend Larry (John Cho) discover that Jake’s ex-girlfriend (Jessalyn Gilsig) is now a programmer at the prestigious (ahem) Montreal World Film Festival. Sensing an opportunity, Jake cooks up a cockamamie cancer story to blackmail his ex into programming his new film in the festival — she reluctantly accepts, only to discover that not only does Jake not have cancer, he doesn’t have a movie. Jake sets about making a ‘gritty’ exposé about the hypocrisy of the industry while the festival is underway — all the while dodging the fawning attention of festival staff and organizers, who admire his bravery and courage when faced with a deadly illness and want him to speak on various panels. 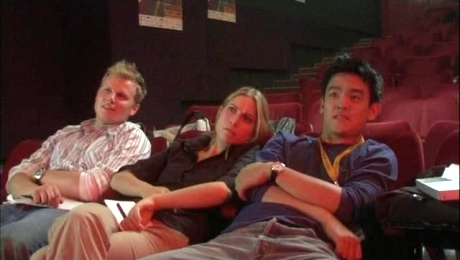 There are several levels of meta fuckery going on here: See This Movie is not only a film about bad filmmakers making a (terrible) first film, it’s also director David M. Rosenthal’s first film, and it looks like a horrible bag of shit visually. This era of grainy, muddy early digital photography is not likely to go down in history, but at least Rosenthal tries to wring some humour out of the bad camerawork and choppy sound editing. It has the vague rumblings of being a found-footage comedy in its visual form if not its content, but truly the most bewildering bit of metatextual humour is the usage of the festival. The film’s central joke is that these buffoons have gotten into a major film festival without having shot a single second of film, but with the benefit of hindsight, it sure looks like the festival itself is what is being ridiculed.

Certainly the filmmakers could not have approached the film festival with the pitch “we need a pathetic film festival that would accept any amount of garbage and we thought you’d be perfect.” Clearly, they were banking on the prestige of the festival to set up the joke, but it was already waning in those days, and the filmmakers make no effort to not make the festival look like a shambolic three-ring circus. When Jake shows up to a panel (also featuring Miguel Arteta as himself) while tripping hard on molly, it really appears that there are about seven people in the room. Even the supposed wild party scenes are sparsely attended at best. According to Wikipedia, the festival even programmed the film-within-a-film (titled Shooting From the Soul) secretly; attendees who ventured in were treated to a workprint version of the film that was currently being made, which must have been both perplexing and somewhat frustrating for the (likely) handful of people who wandered in. (I have to assume the workprint version involved a lot of long improv-ed bits in hotel rooms, judging by the final product.) 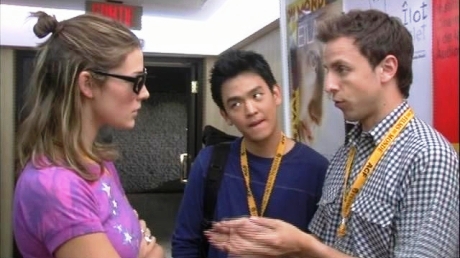 As a film, See This Movie is ramshackle and often making up for lackluster jokes with misplaced energy, but it isn’t actually bad. Unlike most movies operating at this level of budget and sophistication, it actually has a funny cast. More impressively, it actually gives them funny things to say or do. Not much of See This Movie is particularly original, but it’s also a film of very modest ambition and scope given just about the appropriate amount of thought and care. The film was produced by American Pie directing and producing team Paul and Chris Weitz as the first project out of their production company Depth of Field. It seems like more of a test run than anything, and almost everyone involved went on to have a fair degree of success in things that weren’t mostly shot in hotel rooms and at Concordia (Rosenthal went on to direct a handful of well-regarded but mostly under-the-radar indies like Janie Jones and A Single Shot). In short, See This Movie isn’t very memorable — but it isn’t embarrassing, either, and that’s something.

It also serves as an invaluable document of the MWFF as it apparently stood in 2003. We’ll likely need all the data to create a cyborg Serge Losique when he inevitably keels over but stipulates in his will that his robotic self needs to keep spearheading the festival. ■