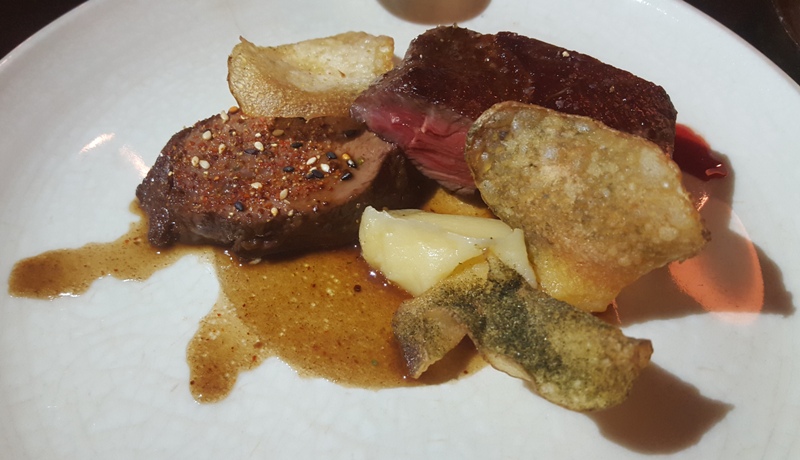 True to its name, the new market cuisine resto le Fantôme haunts Griffintown on two fronts. The first is its location and vibe of secrecy: It’s a quiet space, a 30-seater getaway only recognizable by a menu hanging adjacent to the small triangular logo on the door. Carved out of an old ironworks, it discreetly changes its menu by season, and is subtly decorated with oozing candles and antiques. The second haunt is the taste: The food and drinks are so carefully curated (and fairly priced!) that the whole operation brands the tongue. Plates are small and artful; you come for stimulation of the palate, not to bust your gut. Restaurateur Kabir Kapoor (formerly of Montreal’s Indian hotspot le Taj) and chef-cum-polymath Jason Morris (Grumann ’78, Milos, Ritz-Carleton) seem to prefer this discretion, as they’re created a spot that engenders contemplation of their experimental takes on conventional dishes and choice selections for libation.

A friend of mine and I arrived just after the front door was unlocked. Stepping into its dimly lit interior, Kapoor didn’t take long to genially approach us, seat us and walk us through the menu items. Once informed, we were equipped with an on-point waiter. We took him up on his suggestion of the carefree house apéritif, a mix of plum purée, fortified Maderian wine, touches of Muscadet and simple syrup with a dehydrated orange floating on top. While we chewed the garnish, the amuse-bouche arrived, a lightly salted tempura garlic flower scape sprinkled with powdered hibiscus that gave the crispy texture a touch of sweet earthiness. More, please. 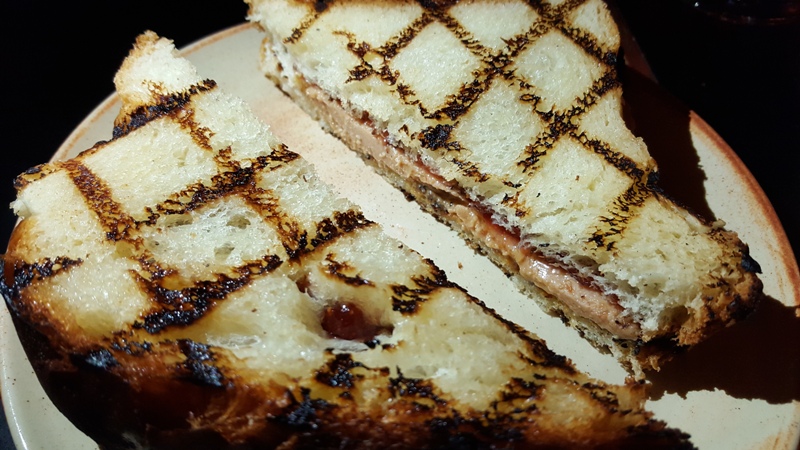 While you won’t feel obligated to pair your choices with wine, consider a glass or two when the staff asks. They know their stuff. All told, it’s a small but sturdy list of private imports that are satisfyingly low in tanins and residual sugars, and organic to boot. The citrus and limestone notes of the Chablis (2013) from Domaine Oudin made twice the impression when combined with our first sampling of the endive, blue cheese and hazelnut salad ($8). That rich cheese sauce, hazelnut garnish and a burnt lemon to squeeze took ample care of the endives’ bitterness, something I tend to be wary of, leaning more towards pleasingly sour bites. Though if I had to pick favourites from the salad selection, my money’s on the tomato-nectarine carpaccio ($9), a simple but sculpted offering. This delicate dish of thinly sliced berry and fruit laid atop a bed of crème fraîche and garnished with micro basil is incredibly refreshing. 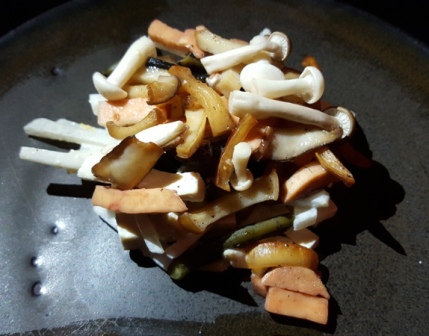 Wanting a selection from the menu that’d have a bit more heft, I went for the beef tartar, potato and grapefruit dish ($13). Here’s one dish where you can find the kitchen’s playful nature come out: a take on a typical diner’s corn beef hash ‘n’ eggs, its bed of minced potatoes are roasted, fed through a sous-vide process and then fried, mounded alongside a tartar whose meat is half-charred, giving it a darker, smokier flavour and tender texture, rolled in grapefruit juice for a summery acidity that lingers. What’s more, a small quail egg yolk lay atop the tater bed, which when poked gave way to a pure, viscous cream to roll bites of the plate’s contents in. It’s twice the smoky taste when paired with the supple ruby red Langhe Barbera (2012) from Cascina Corte. “The risk is trying to slowly introducing people to maybe unorthodox combinations,” Morris told me later at the end of the meal when I mentioned enjoying this. “It’s not always meat and potatoes, and if it is, there’s always something personal thrown in there.”

My companion is a vegetarian, but we weren’t hard-pressed to find something for her to follow up those salads with. Kindly catering, the kitchen whipped up a dish that turned carrots into buttery goodness: Aside a house brioche still warm from the grill, small local Quebec carrots were lain atop a carrot emulsion, dressed to the nines in zucchini flowers and peppered with flakes of horseradish ($11). 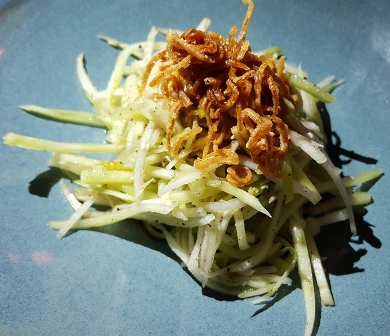 I could have easily left satisfied at this point. But with nary an entrée in us, we ordered on, starting with the fish, onion jam and greens ($23). While the most pricey choice on the menu that night, it was worth it. The fish, a New Zealand sea bream, just melts in the mouth with its accompanying spinach, all rolling in clarified butter. The onion confit, when added to a bite, adds a smooth taste of caramel. But the real seasoning that knocked me out, beyond the salt of the butter and sugar of the jam, was the addition of lemon salt; unexpected, but more than welcome. In terms of presentation, this had to be my favourite, as green spinach bubbles floated on a rim of butter around the alpine-like contours of its stacked ingredients.

Finally, to end the entrées, my friend and I doubled down on two colourful dishes: Tandoori oyster mushrooms ($8) and eggplant garganelli ($9). The ‘tandoori’ aspect of the white and blue mushrooms wasn’t referring to the cooking process as much as a word association, as they swam in a dark orange sauce of tandoori spices. Oyster mushrooms are a consistently thin fungi, making for easier cooking, and their chewy texture was aptly paired with garlic chips, crisped until only a residual pungency remained. Second, that garganelli. It was an incredibly simple dish of pasta and pickled eggplant, but fascinatingly delicious. Our server noticed my friend and I scratching our heads over the dish and joked: Did we want to know the secret ingredient? Ginger. Just a touch, and it made all the difference.

Lastly, we could have settled for the bubbly cherry cola jellies that the resto offered as a complimentary finish, but decided to try two of their four desserts. They’e well-rounded takes on familiar confections that ended the meal on a fun note, homecooking made fine dining. Their malt ice cream sandwich ($4), served in a finger food style, was house vanilla with a crystalline texture between not-too-heavy malt chocolate cookie. The white chocolate mousse lathered over a blueberry crumble had the same effect, and curry powder sprinkled on top, giving a nosh some residual nutmeg flavour ($6).

So, maybe this recap of a le Fantôme experience will be null and void before too long, as the menu will invariably change. But as opposed to a static menu, reliability at this resto comes in other forms. You’re coming for the inventive kitchen, which you can watch as the chefs wordlessly execute dishes in complete concentration, and the excellent staff for giving you a great time. It simply won’t disappoint. Foodies, if you’re not talking about this place yet, get cracking. ■