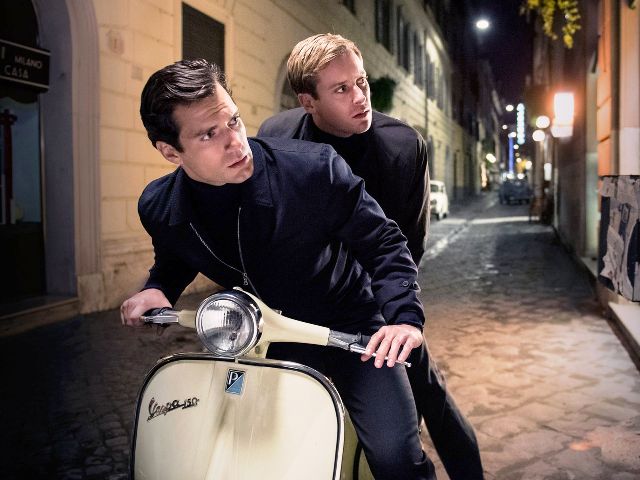 Consider this bit of Hollywood nonsense: if director Guy Ritchie (whose last two movies grossed over $1-billion) wanted to make a ’60s spy movie with Superman and the Lone Ranger in the leads, it would almost certainly be seen as a foolish and risky endeavour. If you tack on the name of a ’60s TV show that’s not likely to ring a bell to anyone under 50, however, you’ve got the makings of a summer blockbuster. I don’t think The Man From UNCLE is a hot property outside of memorabilia collectors who hang out at the St-Michel flea market these days, but such is the pull of the rebootable franchise.

There have been talks of making a Man From UNCLE film since 1993 — directors like Quentin Tarantino and Steven Soderbergh were once attached, not to mention that nearly every dark-haired actor born between 1960 and 1985 was likely considered for the lead role of Napoleon Solo. Needless to say, this current incarnation of The Man From UNCLE is likely not the best outcome of all of these situations, but it’s hardly the worst.

Napoleon Solo (Henry Cavill) is a suave former art thief turned American special agent; Ilya Kuryakin (Armie Hammer) is a hulking KGB agent prone to fits of violence and vengeful rage. At the height of the Cold War, they operate on opposite sides of the conflict until a shadowy organization lurking in the periphery of both factions makes it clear they plan to usurp the conflict and destroy the world. Solo and Kuryakin are forced to put their differences aside and work together to find this shadowy organization with the help of Gaby (Alicia Vikander), a German auto mechanic whose estranged father may be their only way in.

Ritchie goes full-bore into the pre-psychedelic aesthetic, with opulent hotel rooms, snazzy three-piece suits and flat mid-Atlantic accents galore. Propulsed by an admittedly pretty snazzy mod-accented soul-jazz score, The Man From UNCLE falls on the right side of the retro fence, utilizing its setting organically without pushing too hard on the coy references to Sixties culture. I think we’re likely to see more and more action movies go the period route as writers and filmmakers try desperately to avoid stories that can be resolved with cellphones and iPads – we’d be lucky if they all go about it the way Ritchie does here.

Ritchie’s attention to detail carries The Man From UNCLE through its rather pedestrian we-have-to-find-the-nuclear-warhead plot; from touches like Russian characters speaking entirely in Russian to each other (no exposition stew in heavily accented Russian between two characters who have no business speaking English to each other) to the almost complete lack of slam-bang action scenes for the first half of the film, Ritchie proves to have a pretty light touch for this kind of film. His visual acrobatics sometime feel superfluous (enough strapping the camera to doors and other hinged shit, Ritchie!) but he has a light-hearted enough approach to the material that he manages to make yet another boilerplate spy movie plot engrossing, if not exactly entertaining.

Where The Man From UNCLE really falters, however, is in the casting of Solo. I haven’t seen enough of Henry Cavill to really have any opinion on his acting, but he’s just miserably miscast here as the suave and debonair lead. Cavill struggles tremendously to hide his English accent throughout, settling on a sort of flat broadcaster tone that he’s seemingly picked up from old half-melted newsreels. Almost all of his delivery is flat and affected, as if he was a newscaster asked to fill in for a sick actor at the last minute. Cavill fills out the series of three-piece suits admirably, but he just lacks the charisma necessary to bring Solo to life.

Hammer fares significantly better as Kuryakin, the charismatic lug with the focus and drive of a man possessed but the frame of a mutant bouncer. Vikander continues her unbroken streak of awesomeness as well, slowly but surely climbing her way up to the A-list with a twist on the usual badass-in-distress, but they can’t really support the miscasting of Cavill all the way through.

The Man From UNCLE also suffers tremendously from being released so close to Mission: Impossible – Rogue Nation (Tom Cruise actually dropped out of the Solo role to take on the fifth M:I installment). While aesthetically pretty different, they both supply similar spy thrills and it’s undeniable that M:I – RN does it more effortlessly and more effectively. As a bizarrely unnecessary potential franchise starter, The Man From UNCLE is idiosyncratic and fun enough to be a nice diversion but it seems like the odd man out in a summer that’s actually been pretty decent with the action flicks. The chances of an actual franchise growing out of this film are pretty slim, but time may be kind to The Man From UNCLE. ■

The Man From UNCLE opens in Montreal theatres on Friday, Aug. 14. Watch the trailer below.