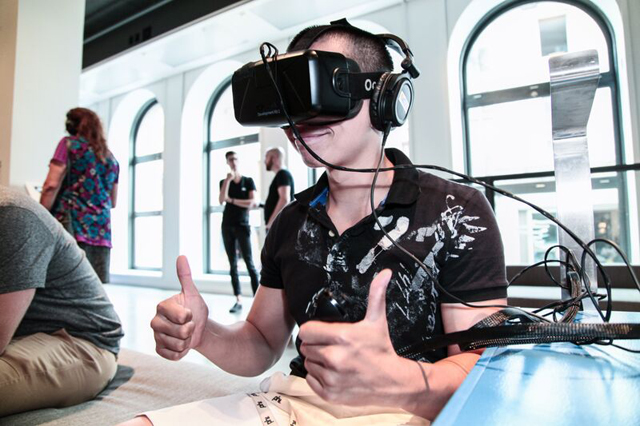 A visitor tests an Oculus Virtual Reality device at the Phi Centre. Photo by Andrea Cloutier.

The Phi Centre’s current exhibition, Sensory Stories: An Exhibition of New Narrative Experiences — a collaboration with the Future of Storytelling (FoST) group and the Museum of the Moving Image, both based in NYC — brings together a variety of carefully selected pieces that all deal with the challenge of storytelling in a more directly sensory way, using cutting edge technology such as the Oculus Rift and other Virtual Reality (VR) tools.

As you enter the first floor space, you may wonder where it’s all happening since at first glance this seems nearly too minimal for a creative display. But the trick is to really take your time, as each station — from the central Oculus island to the neatly mounted iPads — is worth exploring and getting stuck in. Each piece presents a unique story, presented in a variety of ways through these newly accessible technological platforms. It’s a feast for the eyes, with some iPad tweaking.

On the second floor, your ears, eyes, nose and sense of touch will be solicited more directly. As you climb the stairs, you’re greeted by a wall-based piece, then the epic Birdly flight simulator (Ed.’s note: not yet open at the time of our review). Finally you enter the third section. In this smaller, more intimate space, you will find a mix of cutting-edge digital displays and the more sculptural Parade, a counter-weight to the mostly flat, screen-based installations.

Sensory Stories is an example of how it’s possible to make a meaningful and pertinent use of these new technologies as they become available — despite being mainly geared towards entertainment — in a gallery installation presentation.

Notions of ‘real’ and ‘alive’ are recurring themes across VR’s different applications. Like any other medium, the challenge remains to go beyond its technical possibilities. The excitement here is the potential for feeling immersed, prompting users to not only re-think who they are, but also how they feel in body and mind.

Sensory Stories includes several works that explore these possibilities, including the Oculus Rift work Herders by Montreal studio Félix & Paul, which brings you alongside yak herders in Mongolia. The exhibition also includes three other Oculus Dk2 experiences which all have a distinctive narrative and visual treatment. (Dk2 stands for Development Kit, and is the precursor to the Oculus GearVR consumer version which can be ordered online for $200.)

Way to go / Jusqu’ici, a Québec-France co-production through the NFB is particularly well suited to both the mind-bending immersive 3D space and the physical contraption of wearing the Oculus Dk2. Borrowing a lot of the tropes and appendages of video games, it plays with the language of joystick ‘button-pushing’ and combines simple animation, evocative ‘real’ video and plays with the idea of moving forward, which our post-industrial world has sworn an oath to (with often destructive consequences).

Clouds above Sidra by Chris Milk was commissioned by the United Nations. It takes the viewer into a Syrian refugee camp, in all it’s routine sadness, from the perspective of a 12-year-old girl. This reminded me of the effect that the 1993 publication of Zlata’s Diary had on me, when reading about the daily life of this young girl (who was my age) living in Sarajevo while it was under siege.

NFB (Vancouver) project Bear 71 makes very good use of the web to tell the story of a female grizzly bear in Banff National Park (see the NFB’s interactive web-based presentation here). The gallery installation adds a novel element of iPad interactivity, but those who want to dig deeply into the bear’s story may find this work more at home on the web.

With seven other narrative platforms, from the ‘simple’ iPad experiences Pry, Welcome to Pine Point, John Lennon: The Bermuda Tapes and 1979 revolution Game, which were some of my favourite, to the more ambitious Birdly, which uses an elaborate Virtual Reality rig that acts as a flight simulator; the show really opens up the debate around how to tell meaningful stories today through cutting-edge technology.

Other notable works include Mimicry, which acts as a subtle mirror-screen in the guise of a pair of ‘tableaux,’ and Goldilocks and the Three Bears: The Smelly Version, which takes you through the classic story, but augmented with smells. Both are clever investigations and formally well executed, if not somewhat scholarly. Possibilia and Untitled on Google Cube are exciting projects but less engaging in the space than some of the other works.

Two of the pieces, which dispense of a screen altogether (although they do use projections) — Parade and Hidden Stories — require the viewer’s more active, less touch-screen participation, which emphasizes their sculptural qualities and their relevance in a gallery space.

In many ways, the Sensory Stories exhibition heralds the rapid changes in the ways now available to appreciate the many stories there are to be told. Throughout the exhibit, your taste for the open possibilities offered by these new technologies will be altered and broadened, leaving you wanting more. ■
Sensory Stories is on at the Phi Centre (325 St-Paul W. entrance) until Sept. 27. Entrance is free, except for the Birdly flight simulator, for which there is a $5 fee. See full details here.