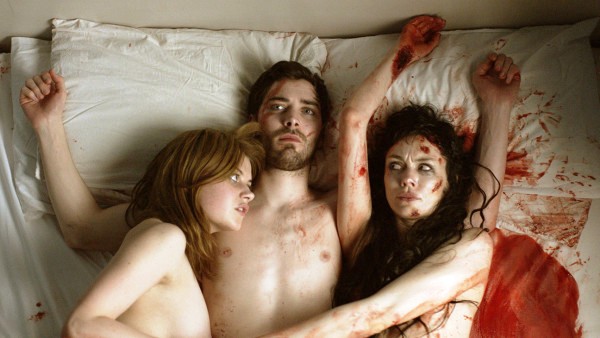 For most people, the ultimate test of a horror film is “is it scary?” . Barring that what is actually scary is highly subjective (I never get in more trouble as a “movie guy”  than when I’m asked to recommend something that’s really, really scary), this criteria also dismisses films that utilize the horror genre for satirical or metaphorical purposes. Nina Forever isn’t particularly scary, but it uses the trappings of the genre in a way that I haven’t really seen before. It’s billed as a horror-comedy despite being not particularly scary nor drop-dead funny, but there’s really no more accurate description.

When Holly (Abigail Hardingham) begins dating her coworker Rob (Cian Barry), she’s attracted to his dark aura and to the fact that he tried to commit suicide after the death of his girlfriend (Fiona O’Shaughnessy). “Imagine being fucked by someone that intense,”  she deadpans to her coworkers. Holly isn’t exactly prepared for the fact that Rob, despite his better judgment, isn’t over Nina’s death — that might be because whenever he tries to have sex, the mutilated body of Nina pops out of the mattress and she begins chastising them and bleeding all over the place.

Part ghost story (Nina is actually tangible and physical when she appears, forcing Rob to spend a fortune in new linens every time he wants some hanky panky), part Grand Guignol sex comedy and part dark meditation on loss and closure, Nina Forever is unusual and highly original while also being sort of clumsy and aimless. It springs from the same sort of goal as last year’s Life After Beth or Joe Dante’s anemic Burying the Ex but opts instead for an artier, more detached style. The beautiful cinematography and deconstructed ’70s-style editing (which the Fantasia program notes compare to Nicolas Roeg, a not-inaccurate comparison) gives Nina Forever a look that sometimes clashes with its sense of humour, but the end result is like nothing I’ve ever seen. (Alex Rose) 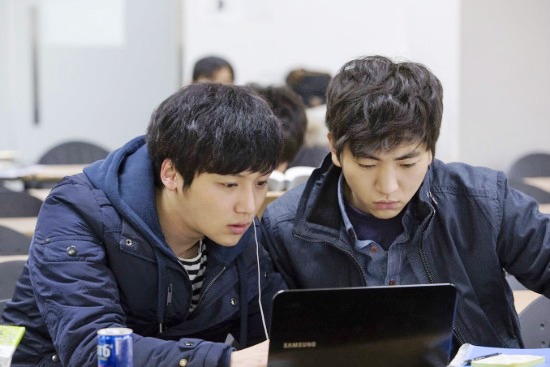 Cyber-bullying is now ingrained our collective consciousness as a plague in the same way that drugs might have been during the Reagan era, so it’s no surprise to see more and more cautionary tales being released on the subject. I’ve talked before about the Korea drama Ingtoogi, which mixed martial-arts fandom and Internet flame-wars — now, Socialphobia gives us a story entirely dedicated to online harassment.

After the suicide of a soldier, a “troll” causes a stir on online forums when she ridicules the dead man. Internet-savvy kids figure out the identity of the “flamer” and where she lives, and a party of a few young men decide to confront her face-to-face. Meanwhile, Ji-woong (Byun Yo-han) and Yong-min (Lee Ju-seung), two students who aspire to become cops, decide to join the “live raid” out of boredom.

Everything rapidly goes south when they discover the hanged body of their potential victim. The whole event being broadcast live, everyone implicated finds themselves in it deep. Fearing that they won’t make it as cops because of this incident and because some clues lead them to believe that the troll’s death is suspicious, the young men get entangled in a desperate attempt to solve what they now think is a murder case.

Right off the bat, I expected Socialphobia to carry a strong resemblance to those old, often-caricatured PSA movies about drugs. There’s this permanent over-the-top attitude about how the kids get so involved in their virtual world that it becomes laughable. I get that this is fiction and that, as a thriller, implausible scenarios are unavoidable, but this film goes way overboard. It’s obvious that things will not go as intended for our two leads during a scene where Young-min, who was reluctant to get involved in this Internet vigilantism in the first place, exclaims in front of his friends “this is actually pretty fun!” While I believe it’s important to address this issue, the over-seriousness of Socialphobia makes it counterproductive.

There are moments that do pay off in Socialphobia, but anyone who’s ever been on an Internet forum or even bullied online might have a hard time watching it without constantly raising an eyebrow. (Emmanuel Delacour)