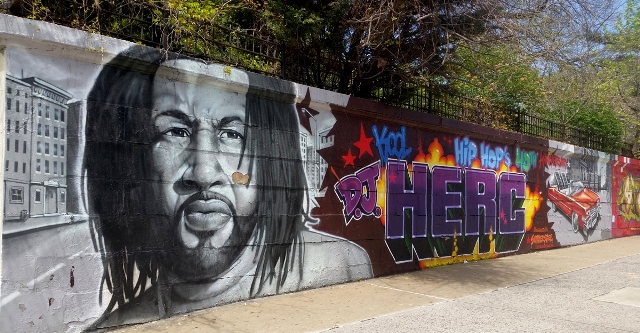 A tribute to Herc in Brooklyn

From the people to the park, to Pac to your pockets, from spray paint nozzles to sainted prophets, to the breakers, poppers and lockers; rap millionaires, politics and profits, then back to the people, the past, the present, the party — you can’t bring that beat back any further than DJ Kool Herc

Guest of honour to Under Pressure’s 20th anniversary celebration, Herc privileged Cult MTL with a candid look at his relationship with his enfant bete. With no further introduction, ladies and gentleman, the Father of Hip Hop.

Darcy MacDonald: How many times have you been to Under Pressure, Herc? And how did you and (festival founder and current Verdun city councillor) Sterling (Downey) get to know each other?

Kool Herc: I came up there twice. (I think I met) Sterling through an initial booking, but maybe he came to New York. I can’t remember, really, but I love the brother and he’s looked out for me, and it’s been a good friendship, with both him and Ewan (Mill, UP co-organizer)

DM: What did you think of the Under Pressure festivals you witnessed, as compared to the early days in New York, and what you started?

Herc: It was refreshing to see another country embrace the hip hop thing. I loved the dancers, and the graffiti, and the whole vibe. I always treat it with love.

DM: Lemme ask you, what’s your day-to-day like? What’s Kool Herc get up to in a day, a week, a life in New York?

Herc: (chuckles) I wanna be more active. I do my thing, you know what I’m sayin’? I’m at the Andrew Freedman Home as a resident artist over there on the Grand Concourse, with other artists. And I’m all around. I do my thing!

DM: So you still play out a lot?

Herc: Yeah, I’d like to be more, but otherwise, it’s pretty good.  I did a photo shoot for the NY Times, it’s gonna be comin’ out Sept. 13 in the magazine section.

DM: Oh dope, what’s that about?

Herc: All the high profile people in New York City that made an impact. Authors, movie stars, (cultural influencers). It’s pretty big. I also got recognized by the Institute for Audio Research, they gave me a lifetime achievement award in July at the Apollo Theatre. It was packed out.

DM: He’s got the message? It’s crazy out there these days, Herc.

DM: What does hip hop have left to give in this situation that we remain in, in these heavy times?

Herc: It needs to harness the power that being together is about. Stop  being a liability, stop this egotistical, pompous, I’m-better-than-you (attitude) and, I gotta say, compensate in real, real, real way with substance and finance that could help with the kids in the community. Open up the forums that look at life. They need to put the mic down and shut the off and come and talk to them.

And it’s the same for hip hop. It should be that way. It should be a way where you’re a part of it and you gotta have a rep to get into the business. Instead of, you know like,  you meet somebody…and you know, it happens like that. But at the same time too, they need to be structured. And all those millionaires that have cashed out on hip hop, they need to go somewhere and have a conference, and start a new growth on this culture, with the respect and attitude that it’s supposed to come with.

We got the battle rappers, and that’s another way of the sport getting recognition. I base it on sports that have got knocked down, and beat down and everything, and they got they’re shit together. Hip hop can do the same thing too! You got guys like Pac, millionaires off two records, dead and gone. And there go Drake and Mill carrying on back and forth. I hope just to be present, and we can squash it.

Hip hop is not about that. It’s about lyricism, and it can be about good times and good memories. Hip hop is about youth, and young at heart. That ol’ “gangsta rap” – there ain’t no gangsta rap, nobody named that “gangsta rap”, that’s the media. “Gangsta rap.” What the fuck is “gangsta rap”?

DM: Questlove said awhile back that despite the huge business around it, hip hop lacks a sense of agency.

Herc: Exactly. And if he says that, too, he needs to come sit down at me, and put me up on that show and lemme start speakin’ my peace on it.

Herc: Okay? It used to be Ed Sullivan saying, “Ladies and gentleman, we have so-and-so speakin’ on such…” What’s goin’ on with that? We come from the same place. (Questlove) comes from hip hop. I’m not in the bullpen, I’m not in the crackhouse. I used to be, but not anymore. I’m community.

Herc: But cats, they just know me because I come in many places. I don’t come with no entourage. It’s just me! And that’s me. Wherever I see you, I give you my props. (People) wanna see me in politics. Where the fuck your congressman at reppin’ the culture of hip hop? I’d be in the political arena. And we all could walk in there, too. An’ it’s gonna be a buncha nuisance!

DM: I’m down man, even from Canada. Kool Herc for President!

Herc: You know? ‘Cuz lookit, you know, the United States don’t have a cultural, representative ambassador of culture.

Herc: (We) don’t have one, and we have all this music and art and everything! We the frontrunner on that stuff! And we don’t have someone representing that? Every other culture has that, but we, the United States, don’t have one. An ambassador of art and culture.

We gotta stop this nonsense, man. Stop the egostical stuff, this mayhem stuff. Start being a nuisance and stop being a liability! You gotta go to college to get shot! When the white boys in college start leadin’ up on it incorrect, where it used to be the old dealers comin’ in and nobody gettin’ shot ‘der!

DM: You have kids, right?

DM: So at some point, like with any child, you have to let go. It’s a weird comparison, but there was this book but the scientist that discovered LSD by accident, called My Problem Child. And he basically spoke on how twisted it is that something so potentially beautiful can become co-opted. As the father of hip hop, how do you feel about where your child is at?

Whether father or mother, so you gonna be reppin’, are you gonna honour me? Because you supposed to? I don’t care, I don’t feel a loss or nothin’ like that. There are dudes that don’t even know me.

And we can’t have no argument, the buck stop right here! It stops right here. So what’s up with that? I’m your father! Bring me out to the ball game! Lemme do your cookout, I’ma spoil the cookout!

Herc: Ya know what I’m sayin’? Lemme come to the afterparty! (laughs) But at the same time, when all is said in truth, boys and girls, c’mon. I’m not beggin’.

I gave it what I got. I gotta say I may have started the wrong culture, probably. I’d rather have started rock ‘n’ roll. (laughter)

DM: Well, none of those true original dudes got paid, either. And I think I know the answer, but I’d go ahead and guess — if you could take something back from hip hop, I don’t think it would be money, would it?

Herc: Nah, nah, nah, nah. Nah. I wouldn’t take money back from it. I’d like to just take control of it to organize it, try to help it. (These) back alley sports got organized. We’s a loose cannon out there, bro.

DM: So moving from one form of politics to another — and with a question I’m certain everyone asks — how do you feel about the shift from vinyl to digital in DJ culture?

Herc: It’s convenient, you know, nothin’ stay the same, all that. But at the same time I love my wax and you can’t get the same, that’s it. That’s the highest fidelity. That’s my two.

DM: How many records you got, Herc?