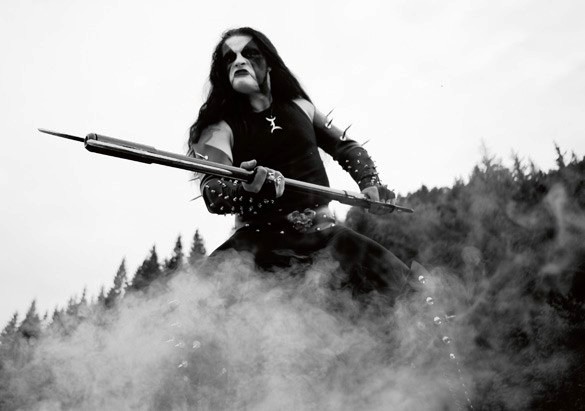 In spite of Heavy Montreal joining the trend of ever-generalizing festival line-ups and trying to cram as many genres that use electric guitars onto a single bill (symbolized by the recent retirement of its actually sort of clever “Heavy MTL” spelling, on the grounds that the name made the fest sound too metal-centric) the festival still has a lot to offer to serious metalheads of many stripe.

Admittedly, they are sandwiched between and among various nu-metal abominations and luminaries of skate punk (which it appears there is now such a thing), but perhaps we should be thankful for this variety after all. Take it as a means of structuring some downtime, building in some breathing room so you actually have time to purchase and pound a few beers between sets, rather than rushing ineffectually against a seething, drunken, sun-stricken throng in order to get from one end of the grounds to the other to catch yet another great band whose set you’ve already probably missed half of.

Gorguts: Although on the whole I find technical death metal a pretty hard sell, Gorguts’s 2013 album Colored Sands was one of the most fascinating and refreshing of a genre that oft-times comes across as mostly a pinch-harmonic delivery system designed by some Buffy-the-Vampire-Slayer-esque jazz demon villain. I have no doubts about them delivering it in full mind-bending, pummeling force, in spite of having to do so in the full early afternoon sunlight.

Neurosis: For those craving something a few hundred BPM or so slower, Neurosis will be ushering in the twilight Friday night with sprawling waves of what can (or could once have been) defensibly called proto-post-metal, or if you cock your ear just right, like Tom Waits singing for a doom band.

Deafheaven: Probably the most loathed band in black metal, but I have resigned myself in advance to probably enjoying seeing them, because they’ll probably still be better than Isahn.

Abbath: The first Canadian performance by erstwhile Immortal frontman Abbath’s self-titled project, which for all intents and purposes it turns out is basically still Immortal, based on early reports of their setlist including a lot of the Immortal’s back catalogue. One could similarly argue that it is basically just a rechristened I — the Immortal / Gorgoroth / Enslaved super-group side project, given that Abbath (the band, not the man) is made up of two out of three members of I (Abbath and King Ov Hell) and has also been playing songs from I’s motorcharged stadium-black metal masterpiece Between Two Worlds. Any way you cut it, that is going to be some icy, triumphant, unmissable shit.