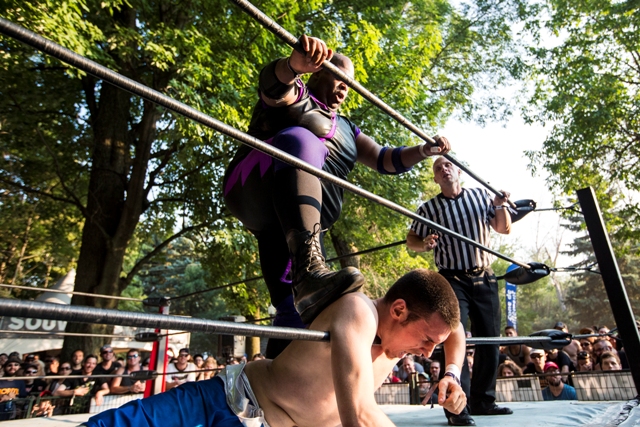 Superstar Shayne Hawke wears a lot of hats. Aside from being a freelance writer and creative consultant on some fairly high-profile (if off-record) comic projects, he belongs to a secret society called the Order of the Red Hand and seeks One World Ginger Government as a member of the Hairfire Club.

Okay, so that was a little exaggerated. Hawke is a local independent wrestler, who in tandem with his production company (said Order) and longtime champions of the Montreal hardcore league Internet Wrestling Syndicate — home to Sexxxy Eddie, the Green Phantom, and so many more — returns to Heavy Montreal for a third season of Heavy Mania, a sweaty, punishing, muscle-bound spectacle of ring-sized proportions that takes place at the centre of the heat on Saturday and Sunday at this weekend’s edition of the annual metal extravaganza.

Darcy MacDonald: So tell us what Heavy Mania is all about.
Shayne Hawke: The way we market the show is that it’s more like a live action “Mortal Kombat” type of show as opposed to a professional wrestling-style show. Whereas wrestling tends to create this illusion of two guys who are really fighting, I had this idea to take it away from that and go the complete opposite direction: set it in a fantasy universe and give people super powers.

My thought process leading to this was, you go to the movies, right? You go see Jurrasic World. You’re not gonna be sitting there in the middle of the movie going, “Ah man, Chris Pratt’s not actually talking to dinosaurs! This is bullshit, gimme my money back!” You suspend your disbelief. You’re not gonna be like, “Rambo got shot 50 times and he’s still winning? This is so unrealistic.”

You know it’s a show, and you enjoy yourself. So the idea was to take wrestling away from telling people that it’s real and immediately shoving in their face that this is a show, then maybe the casual fan could suspend their disbelief, which is what ended up happening (last year).

So there was a storyline about the fate of the universe, and a demon who was put to sleep under Montreal, who’s spoken language was heavy metal music. And any time anyone plays metal or listens to metal, they were indirectly worshipping this demon. And all the demon needed was his weapon of power to return and enslave the universe, basically.

DM: It’s like the GWAR of wrestling!
SH: You’re like the fifth person to say that and yes, that is a great comparsion.

So instead of having a belt, we had a gauntlet made called “The Heavymania,” and we had a 50-man-and-woman tournament, and the winner got to either save the universe or destroy it by giving it to the demon or keeping it for themselves, and save us for a year.

We had demons, and a ginger Illuminati called the Hairfire Club who wanted a ginger world order. So it’s super ridiculous and over the top and campy, but by the same token (that) allows people to take it more seriously as an art form, because they didn’t feel like they were having their intelligence insulted.

So this year we’re gonna do something similar. I have about five seasons of the stuff written already. This was supposed to be season two, but because of (budget restrictions) this year we’ll tell a story but it will be more like, a peripheral story in the universe. Like in comic books where they’ll have like, the main comic book run and then like, three issues on the side where Hawkeye goes to Walmart and Hydra shows up, or whatever.

We’re a hungry group. Wrestlers don’t get as much attention as I feel we deserve, so when we’re given this platform we really go out and give it our all. We’re cross-promoting with the Internet Wrestling Syndicate. When I started out I trained with them.

There are surprises, and spills and thrills. It’s gonna be a good time.

DM: Wrestling gets knocked for being kid’s stuff. I can remember as a teenager looking at the people that wouldn’t leave it alone and thinking, “grow up.” And in retrospect, that’s unfair. Wrestling fans who carry it on into adulthood tend to be very passionate people.
SH: What if you could hang onto that childhood magic, in anything you love? Why wouldn’t you?

You know, wrestling fans, especially growing up, tend to be outcasts. It’s a very marginalized art form in terms of being socially acceptable (or respected). In that way, people will make fun of it without even knowing what it’s about. Like, people knocking it because “it’s fake.” You grow up loving this one thing with your heart and soul attached to it. And then you go to school and tell people, “Look at this awesome thing that brings me joy.” And you get that thrown right back in your face, time and again. What you love is being put down.

You’ll do one of two things. You’ll either stop caring what people think, which most people aren’t very good at. Or you learn to become very, very defensive right away. You go into fight or flight to defend what you love. There are people that passionate about wrestling because there are people who are mean enough to rip into at every chance.

Eventually you say, this is enough, this is my identity.

DM: There are a lot of parallels to metal fans in that analysis.
SH: Absolutely. Dude, look how many people immediately associate metal to violence, and school shootings, and satanism and this kind of stuff. When in actuality, metal heads are some of the nicest people I’ve ever met. When you find a community that embraces the same things as you, you become a lot more open to others. Because you’ve been in that position where someone has tried to take away your smile. And you want to make other people smile. It’s a powerful thing, man. ■