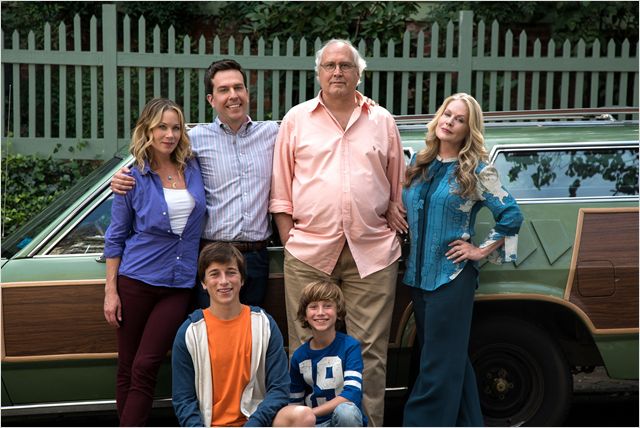 The ubiquitousness of 1980s nostalgia these days leads most to believe that the ’80s were just like now, but better — that we love the films we love from that era because they’re exactly like the films we love from now, but better. The fact that things like Ghostbusters have held up for 30 years gives the illusion that nearly everything that we hold dear from the era has held up in the same way. Enter Vacation, the long-gestating sequel/reboot to the beloved-by-some National Lampoon’s Vacation, a film that has somewhat wormed its way into the collective consciousness as a classic comedy. The original Vacation is fine, as far as ’80s comedies go, but I wouldn’t exactly call it untouchable. It’s fitting, then, that the writing-directing team of John Francis Daley and Jonathan M. Goldstein has remade it by staying firmly in the canon of ’80s comedy.

Rusty Griswold (Ed Helms) is a suburban dad and short-distance airline pilot with a supposedly contented wife (Christina Applegate), a sensitive teenage son (Skyler Gisondo) and a foul-mouthed, bullying preteen son (Steele Stebbins). Every year, the Griswolds rent the same boring cabin and have the same boring vacation. When Rusty discovers that his family does not hold the tradition as close to their hearts as he does, he has a change of plans: his family will recreate the legendary trip to Walley World that changed his life as a teenager. He rents a shitty Albanian minivan and sets out for California, stopping (and being stopped) along the way for shenanigans.

And so begins a picaresque journey across the heartland of America where the Griswolds meet up with Rusty’s sister Audrey (Leslie Mann) and her donkey-dicked good ol’ boy husband (Chris Hemsworth), are chased by a scary trucker, bathe in human shit, struggle with an angry Korean GPS system, go whitewater rafting with a suicidal guide (Charlie Day), break up a public orgy at the Four Corners Monument and generally get up to boneheaded hijinx suitable to a Vacation reboot. It would be unfair to say that this Vacation is uninspired compared to the original, which was just about equally designed to be a joke delivery system before anything else, but you’d think Daley and Goldstein would’ve seized the opportunity to nudge it ever-so-slightly in a different direction.

Familiarity aside, Vacation’s biggest problem is that its ideas of joke construction are played out: instead of playing on notions of surprise, a gag is constructed in a way where you see the joke coming from a mile away (i.e. what they think is a natural hot spring is revealed to be a puddle of human waste) and the laughs come from the characters’ obliviousness (they rub the poo on their faces!) every single time. What worked for Chevy Chase 30 years ago doesn’t necessarily adapt itself perfectly in 2015 (a fact perfectly exemplified by Chase’s flat cameo, where his usual slapstick persona now seems like straight-up senility) and the film’s numerous homages to the original only serve to point out how tired the comedy is.

There are laughs to be had in Vacation, even if they’re of the dumb and guilty kind. Helms and Applegate prove to be game for just about anything, and even the dumbest jokes in the film (it’s a race to the bottom, to be sure, but the worst/best might be Applegate’s vomit-soaked struggle to get through a sorority obstacle race) benefit from the gusto of the cast. No amount of goodwill from Helms and Applegate can really gloss over the fact that this Vacation feels terminally dated. Even We’re the Millers — a film that is not about an actual family and is not actually very good, but more memorable a year later than Vacation after 36 hours — feels closer to what Vacation should be in 2015. ■