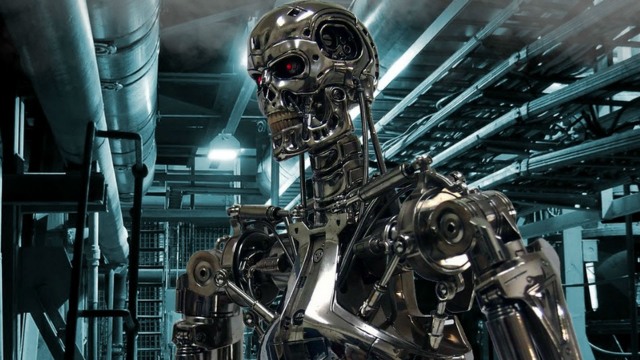 I’ve said before that a bad sequel or remake doesn’t really have more or less stakes than any other film — a bad remake does not retroactively affect the quality of the original you love, and a sequel that plays fast and loose with the rules of the original shouldn’t affect the self-contained qualities of the first one. In other words, there is no reason for something like the Star Wars prequels to be anything but ill-advised forays into that universe.

That theory doesn’t hold as well with the Terminator franchise, however: it’s five films and at least one TV show’s worth of the same goddamned story being told again and again with minute variations. Terminator: Genisys is the film equivalent of that time Carlos Santana released a covers album of dadrock mainstays (like “Smoke on the Water” with vocals by the dude from Papa Roach) and pretended it was original material.

You might want to take some notes during the synopsis, because this shit gets complicated. The film begins in 2017, in a world consumed by an endless war between humans and machines led by the all-encompassing network Skynet. The leader of the resistance is John Connor (Jason Clarke), who devises a time machine in order to send Kyle Reese (Jai Courtney) back to 1984 to protect his mother, Sarah Connor (Emilia Clarke). If Reese doesn’t go back and protect Sarah Connor, John Connor will never be born (mostly because Kyle Reese is also John Connor’s dad). This part should be easy enough to follow, since it is taken pretty much verbatim from the first film.

When Reese arrives in 1984, however, he finds that Sarah Connor is flanked by Pops (Arnold Schwarzenegger), a Terminator that was sent by Skynet to kill Sarah Connor as a child but instead chose to protect her. Reese, Sarah and Pops are tasked with stopping the launch of a new operating system named Genisys that will link all machines together and morph into Skynet — except that, uh oh, there’s some younger versions of Pops (played by CGI Arnie contraptions) out to get them alongside a new version of the T-1000 (Byung-hun Lee), and also there’s a time-travelling version of John Connor from the future who might not be everything he says he is!

Terminator: Genisys is off to a pretty rocky start by essentially hitting the same beats as the first Terminator film, albeit with less interesting actors and clunkier dialogue. The film’s first act is straight-up warmed-over exposition goulash, but even as the film develops it continually returns to the well to ape dialogue and action scenes from the previous films. Even a casual Terminator fan (which, let’s face it, is probably 99 per cent of the film’s audience) is bound to recognize entire sequences as familiar, if not downright repetitive (this is particularly obvious with the T-1000, who seems to have been shoehorned in for those melting metal effects). Terminator: Genisys isn’t drawing from as rich a well as most franchises these days, but it’s a little insulting to the audience’s intelligence to assume that they won’t be able to recognize huge swaths of repetitive rehashing nestled within the film’s convoluted time-travelling action.

Predictably, most of the film’s best moments come from Schwarzenegger as Pops, his taciturn ubermensch facade transformed into a comically gruff father figure that’s still less self-parodic than many of his recent action outings (one exception: his insistence that he’s “old, but not obsolete”). Ironically, Pops’ blatant inhumanity gives the movie a little heart within the explosions, exposition and bus-throwing mayhem; ironic, sure, but also proving that the appeal of the Terminator franchise does not lie in its complex universe, time-hopping fuckery and the world’s most uninteresting will-they-won’t-they (they most certainly will).

As far as the action in Genisys goes, I’ll say one thing: it’s plentiful and competently executed. If all you demand of a Terminator film is that flesh rips to reveal a roboskeleton and that things explode in fiery carnage, you should be reasonably entertained by Terminator: Genisys — except that those very same things also entertained you back in 1984 and 1991 (and maybe 2003 and 2010, but that would make you so easy to please that you’re probably already sitting in the theatre eagerly waiting for Genisys to start). The good news is that this film’s time-travelling structure makes it very plausible that we’ll get to see the same thing repeated again a few years down the line. See you in 2018, John Connor. ■

Terminator: Genisys is in theatres now. Watch the trailer here: