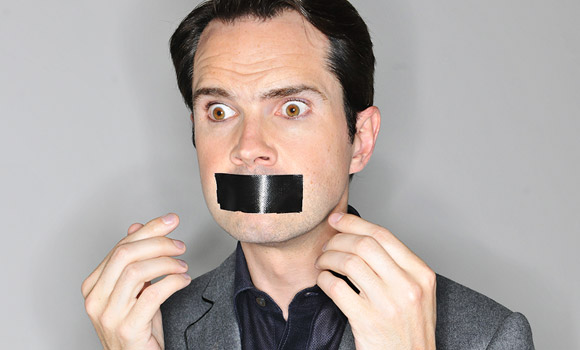 I’ve spent much of the past two weeks looking to be offended. (Normally, all it takes is speaking Quebecanglo French to a French-from-France waiter, but I was looking for offence from a funnier quarter, Montreal’s annual Just for Laughs festival.)

There has been a lot written lately about the fear that “political correctness” is killing comedy, but you’d be hard-pressed to find any evidence of that, especially in the confines of the continually sold-out JFL Nasty Show, where artist Jimmy Carr not only skewered sacred cows like a picador pitching one-liners, he kept lowering the bar in a licentious limbo contest while taunting the audience to tell him when he had gone too far.

The latest wave of anti-PC indignation flared up last month when late-show host Seth Meyers, talking to guest Jerry Seinfeld, said, “There are more people now who will let you know if they think you’ve gone over the line than ever before. You have to feel the same way about comedy.”

“Yes, but they keep moving the lines in for no reason,” the Comedians in Cars Getting Coffee star complained (the video is here). He then gave as an example a joke where he refers to people flipping through their cellphone messages using a gesture “like a gay French king.”

“Comedy is kinda like where you can feel an opinion. And they (his audience) thought, ‘What are you talking about, gay?’”

After “feeling” these unvoiced opinions when his joke fell flat, Seinfeld turned to his crystal ball and added, “I could imagine a time where people say, ‘Well, that’s offensive to suggest that a gay person moves their hands in a flourishing motion and you now need to apologize.’ I mean, there’s a creepy PC thing out there that really bothers me.”

That, he told ESPN, is why he decided, in a preventive move, to stop performing on U.S. college campuses.

Look, a comedian complaining about how the audience reacts to a joke is like a chef getting angry at a customer who doesn’t like his cooking. As transgender comic Robin Tran shared in XOJane a week after the Seinfeld comments, “Even though it can be frustrating and hurtful when an audience doesn’t laugh, it’s not their job to laugh at your jokes; it’s your job to make them laugh. Whenever I see comedians lashing out at an audience, I’m reminded of how ego-driven and angry my comedy used to be. I automatically assumed they didn’t laugh because they were ‘oversensitive’ and ‘too PC.’”

It’s almost like Seinfeld has mistaken himself for the Soup Nazi from his classic TV series. Treating your customers with disdain might work when you’re the Maestro of Minestrone, but as events like Just for Laughs remind us, there are hundreds of talented wits waiting in the wings — and their comic recipes don’t rely on ingredients last seen in 18th-century France.

I don’t believe anything should be “off-limits” to comedic treatment. In the last two weeks I’ve heard jokes about incest, pedophilia, bestiality, midgets, blacks, Mexicans, Canadians, paralympians, murder, 9/11, ISIS, poutine, presidents, prime ministers, polio and perversions of every description. Some made me laugh, some made me cringe, some simply left me confused.

But none left me thinking, “Oh, we shouldn’t joke about that.”

So while there’s certainly nothing funny about rape, for example, that doesn’t mean jokes should be off limits. A smartly crafted joke can help expose the insanity with which we often treat sexual assault victims. There’s even one feminist comedian, Adrienne Truscott, whose entire act consists of rape jokes. At this year’s JFL there was a flood of references to Bill Cosby getting away with drugging and raping women for decades. On every stage from the Wiggle Room to Salle Wilfrid-Pelletier, comedians ridiculed both the falling-rapist-star and the society, OUR society, that contributed to covering up his actions.

Comedy is not a new art form. It’s been around since before the first caveman drew a giant penis on the cave wall or set his buddy’s fart on fire. As such, it has been subjected to more study than the common cold. Some scholars of sardonicism can take a joke apart phrase by phrase and plot its component parts on a three-dimensional Venn diagram. So you shouldn’t be surprised to hear that some people have tried to come up with rules about what’s acceptable and what’s not.

The problem is, it’s the audience that determines what’s acceptable, not the joke writers or their comic calculators.

Audiences are evolving. As the world gets smaller, it’s harder to maintain the emotional distance that allowed previous generations to laugh easily at jokes ridiculing other races and cultures. When contemporary comics make gags about disenfranchised or marginalized groups, they are now much more likely to “punch up” than “punch down,” expressions coined to describe the targets of humour. When you punch down, you are hitting at the victims and the powerless, while punching up is aimed at the elites.

But a truly talented comic can punch in either direction, as evidenced in the humour of George Carlin, whose late career performances were more rant than stand-up. Yes, he ripped into the elites, but he was just as harsh about us and our acceptance of a society where corporations tell us what to think. “I do this real moron thing, and it’s called thinking. And apparently I’m not a very good American because I like to form my own opinions.”

These days the downtrodden are thinking and punching back, unafraid to tell comedians when they find a joke offensive. That’s not an attack on free speech, as some like to describe it, but the very essence of free speech. The comedian is free to ignore it, but critics are equally free to spend their money buying tickets to someone else’s show and encouraging their friends to follow suit.

One of the great things about events like Montreal’s Just for Laughs, Off-JFL and Zoofest is that the hundreds of acts showcased here expose the festival audiences to a vast smorgasbord of comedic styles. Not only do they draw the top names in comedy, they provide platforms for emerging wits and alternative twits, from absurdist prop comics like Sam Simmons to puppet acts like Sammy J and Randy to local talents showcased in My First Time.

So it’s not surprising that some comedy fans are going to find some of the humour unappealing, disturbing, even revolting.

And down the street, diners will walk out of restaurants because they hate the food or the service — and they’ll vow never to return. Some of the chefs will blame the customers, but if they don’t learn to adjust their recipes and their attitudes, the crowds will shrink until the only people the chefs will be left serving will be themselves. ■