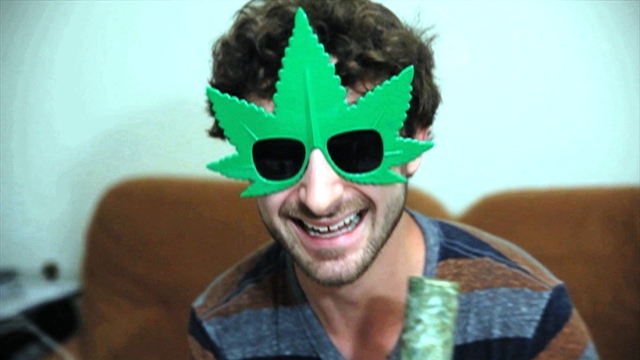 Stoners will have a good reason to set their Doritos down for a minute this week…60 minutes even. The Cannaboiz Comedy Hour is calling.

Cannaboiz is Montreal comic Stephen Spinola and New Yorker Evan Jones. After debuting their hour-long show at ComedyWorks this year on 4/19 (yes, the day before 4/20), they’re happy to be bringing it back north again for a week of Zoofest performances.

“In Canada weed has been pretty accepted for a while now, and it helps that it’s being used as medication,” says Spinola, who moved to NYC in 2013. “It’s definitely less accepted in New York than it is in Canada. It’s so relaxed [in Montreal], whereas in New York people are more business-oriented and corporate. It’s not the same.”

Acceptance of the stoner lifestyle has been a big deal for Spinola, who has a number of family members who work in law enforcement — his father is even a supreme court judge in New York state. Of course this makes for great comedy material, and luckily for Spinola, not much of a legal matter.

Like Spinola, Jones has been indulging in stoner/tripping humour since he started doing stand-up a few years ago. Aside from such prestigious gigs as MC at the Global Marijuana March in Washington, D.C., Jones has become known in NYC for theme comedy shows like The Naked Show and The Only One Tripping, the latter focused on mushroom and LSD humour (the former is kind of self-explanatory), with performers who are actually tripping during the show.

“Weed jokes are gateway material into Evan’s jokes,” says Spinola. He points out that the Cannaboyz don’t necessarily perform stoned, but their material is usually prepared under the influence. “That’simportant so that we connect with an audience that might be in that state of mind, or is in that state of mind usually. We tend to connect with hippies a lot and old people really love us for some reason.”

Headlining The Cannaboiz Comedy Hour is Toronto comic Mike Rita, a specialist in stoner humour, having worked at the Vapor Central weed lounge since the dawn of his comedy career.

“He’s Portuguese so he does a lot of jokes about his relationship with his mother and being caught smoking weed. I don’t wanna give away any punchlines but his mother was really against weed, and then she became more open to it.”

As for how the audience should prepare for the show, well, it’s kind of obvious.

“We would love for you to be on all your drugs and be ready to have a great time,” Spinola says, referring mainly to weed and hallucinogens. “I mean yeah, I wouldn’t take heroin before coming to the show. I know some people are gonna come on cocaine, that’s their prerogative, but it’s gonna be relaxed. Mike Rita is the most energetic, he’s going right off the top, then it’s all downhill on the energy (laughs).” ■

Presale season passes are available at a 25% discount until Dec 10.