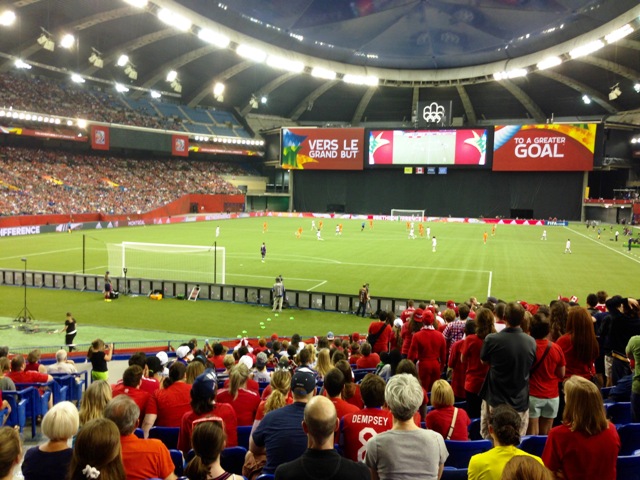 Canada played the Netherlands in the Women’s World Cup of soccer on Monday night, drawing 45,420 spectators to the Olympic Stadium. Even though it was not a sell-out (the stadium seats 61,000), this felt like a win for Montreal after last week’s embarrassing turnout for the first day of WWC in the city: Last Tuesday afternoon, only 10,175 came out for the Brazil vs. Korea and Spain vs. Costa Rica matches combined (FIFA staff and security included).

But this was a night-time event, as well as the first local appearance of our national team, who had played their initial games in Edmonton. Matches are happening in Vancouver, Winnipeg, Ottawa and Moncton as well, and the stadiums in all the other cities appear to be full most of the time, though they’re all smaller than our Big O — ranging from 54,500 in Vancouver to only 10,000 in Moncton. (And whenever the U.S. plays, travelling flag-waving face-painters who call themselves the American Outlaws pack the stands, making the team feel like they’re playing at home.)

Despite the rising popularity of the game, there are a few other factors at play that are putting a bit of a damper on this WWC. FIFA has been in the news for all the wrong reasons, though that corruption scandal has been brewing for a while, and it’s high time heads rolled at the top of the organization — but hopefully not all the way down to the field (unless a medieval soccer match is deemed appropriate punishment). It would be a shame to let (largely) man-made mistakes affect the WWC, especially given that the bribes in question appear to be exclusively related the men’s World Cup tournaments — Canada may be involved in some dirty stuff right now, but bribing FIFA for the WWC isn’t likely be one of them.

The implausibility of that scenario only demonstrates how much women’s soccer is still unfairly considered second-class. Even men’s soccer is a cult sport in North America, but the women’s game isn’t aided along when it’s devalued from the top down. FIFA and the Canadian Soccer Association made the controversial decision to use turf instead of grass for the women’s tournament, supposedly because it was easier (and therefore cheaper) to use the stadiums’ pre-existing field. This would never fly in any (adult) men’s tournament. FIFA also claims that all players can be subject to gender verification procedures, but no man has ever been tested, whereas every single player in the WWC has been certified 100 per cent female.

On the national level, some of the world’s top soccer-worshipping countries haven’t supported women’s national teams, or women’s soccer in general — where is Italy, Greece, Portugal and Argentina in the WWC? It would appear that the success of the men’s teams is a deterrent to developing a significant soccer culture for women, but that logic breaks down given the top 5 rankings of the women’s teams from Germany and France. With the exception of Brazil (where it was illegal for women to play soccer between 1941 and 1979) and Korea, the top 10 women’s teams come from countries that are progressive (or civilized) when it comes to gender equality. 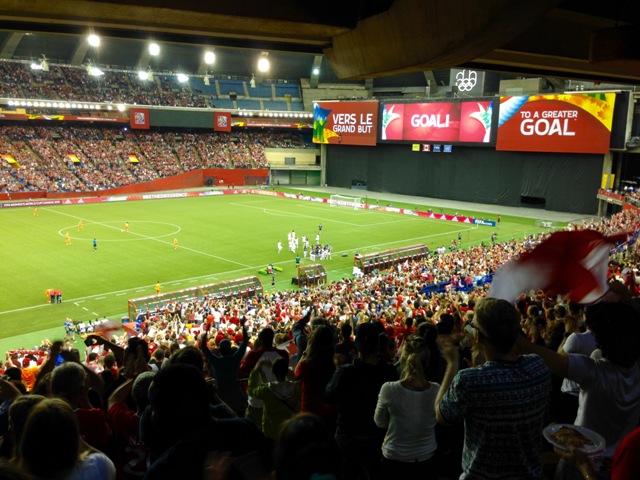 Goal for Canada! (long before the last-minute Netherlands goal that tied the game)

As for soccer fans, even the skeptics can be won over after watching a game or two. These women play the same game as their male counterparts — they’re just as nimble and nearly as fast, and apparently the goalies can kick the ball to each other from their posts when they feel like it. There is virtually no difference between the women’s game and the men’s game, except that you won’t see women diving and being cry-babies (unless they’re really hurt which is more likely on turf). Not surprisingly, the looks of the players is more of a talking point during the WWC than it was when the men competed last year, though luckily (mostly) not so much in the proper media, but in the lowest common denominator vox populi of Twitter, where the obsession with Hope Solo’s X-rated selfies from last fall persists.

The more significant Solo scandal is her arrest a year ago for two counts of domestic abuse against her half-sister and nephew. The case is still alive but has not been heard in court yet because charges were dismissed due to lack of cooperation from the complainants. According to a piece in The Guardian, it’s unclear whether Solo’s 30-day suspension by U.S Soccer in January was due to this incident or the fact that Solo’s husband was caught drunk-driving an official U.S. Soccer vehicle — this is the kind of lack of transparency we’ve unfortunately come to expect from the soccer world. Some critics have called for her dismissal from the team, pointing to a double standard, but in fairness this is not the same as what went down with the NFL, where at least some of the players punished for domestic abuse were formally charged and sentenced, and in one case caught in the act on video. Although former classmates are now coming out claiming Solo bullied them in high school, and witnesses to her arrest attest to her being a belligerent ass, all of her crimes remain alleged. And so the controversial soccer star — regarded by many as the best goalie in the world — remains on the team.

But if decades of scandal haven’t dulled the public’s appreciation of men’s soccer, there’s no way that turf and a raging Jennifer-Carpenter-on-steroids can ruin the fun of the Women’s World Cup, which continues until the final on July 5. Canadian TV ratings for the WWC are double what they were four years ago, and it’s not just because we’re the host country — ratings in the U.S. have tripled. Clearly, more and more people are realizing that this really is world-class soccer, and that soccer is worth watching. (And from the more cynical media-savvy angle, there’s a chance that the Solo scandals have brought new viewers to the game.) 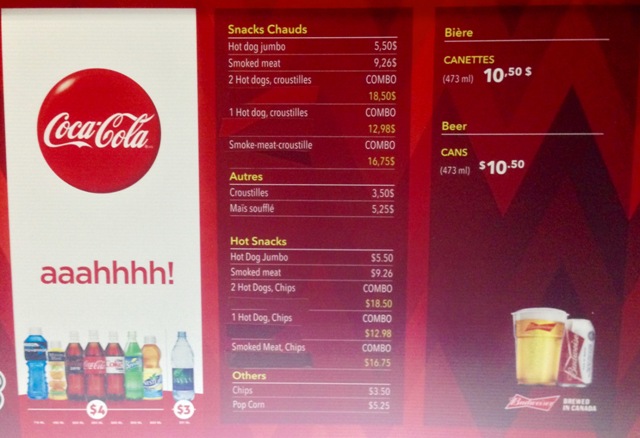 (Do not buy anything from) FIFA’s menu

Montrealers can take part in the experience by catching a game at the Big O. Tickets start at $20, hardly bank-breaking, but pre-eating and pre-drinking is mandatory — what FIFA is charging for food and booze at the concession stands across the country is disgusting (see the menu above).

That said, soccer is an excellent use of the stadium. If this city threw its support behind getting in more big matches like this and perhaps even hosting the Impact year-round (with apologies to the dairy mafia) instead of advocating for the return of the actual most boring game on earth (baseball), perhaps the Saputo stadium would be used for concerts and no one would be talking about demolishing the Big O. (It was recently revealed that the price tag for the stadium’s demolition is estimated at $800-million, while necessary repairs would cost $200-million.)

But it’s just too big and too weird to die. As I stood inside the concrete monstrosity overlooking the green, I noticed that it stretched from the still-visible baseball diamond to the concert stage, bringing to mind another terrible use of the space (One Direction will play there in the fall). The stands were filled with fans — red and orange — screaming for a sport that’s starting to flourish in this country. The Beautiful Game really makes the Big O a lot less ugly. ■