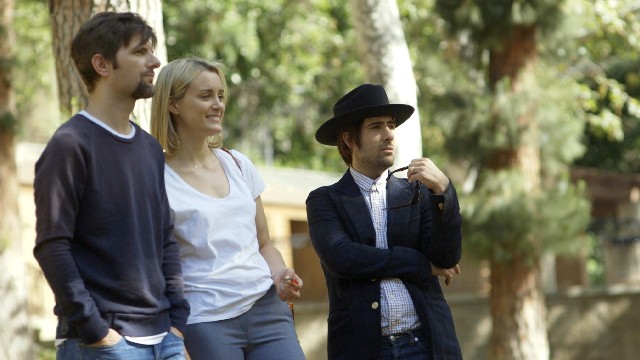 It’s hard to fathom that there would be any boundaries left to break down in comedy. The idea that There’s Something About Mary became a runaway sensation on the basis of Cameron Diaz’s spooge-encrusted bangs seems positively quaint and Victorian these days. Just about the only thing a comedy can do in 2015 to truly destabilize an audience is to be honest, and there’s plenty of honesty to be found in Patrick Brice’s The Overnight, a film that’s just as filled with handjobs and swinging dicks as any garbage American Pie sequel but has the courtesy to also have something to say about it.

Alex (Adam Scott) and Emily (Taylor Schilling) have recently relocated to Los Angeles from Seattle for her work — he mostly takes care of their young son and worries about whether or not he’ll ever make new friends. A chance encounter in a park with the father (Jason Schwartzman) of another young kid leads to a dinner date with Kurt and his wife Charlotte (Judith Godrèche), a well-to-do couple with fairly libertine ideas about friendship. Dinner turns into drinks which turns into an intimate bonding session that involves some light frolicking, paintings of extreme close-ups of buttholes, vomiting, an illicit trip to a massage parlour and (much-publicized) full frontal nudity.

Despite that logline and those somewhat titillating keywords, Brice (whose first film, Creep, was a hit at Fantasia last year and is finally getting a small VOD release these days) has no interest in letting The Overnight play out as a series of humiliations lived by the characters. Even as they get into some sticky situations (both literally and figuratively), the characters are never left to stew in their own awkwardness. There’s something refreshingly unconventional about the way Schwartzman and Godrèche’s characters (who are initially depicted as almost psychotically confident and welcoming) are never quite the cartoons they could be, and Alex and Emily are never quite the hapless innocents a simpler film would require them to be. Brice sometimes leans too hard on the mystery aspect of the couples’ friendship — at least one scene plays out almost like a horror film, which clashes somewhat with the lighter tone of the film.

That having been said, The Overnight is fairly short (a very tight 79 minutes) and extremely contained. Talking about it too much spoils much of its surprises. It’s not where The Overnight goes that’s particularly worthy of discussion — it basically follows the same structure as every other ‘one crazy night’ film in existence — but rather how it gets there. Most of the buzz around the film since its Sundance premiere has centred on a single scene where Schwartzman and Scott dance around with their dicks out (the wide discrepancy in their penis size has become a bone of contention for Alex, no pun intended), but this isn’t even necessarily the most memorable scene in a movie that’s essentially the grown-up, upper-middle class version of an ’80s boner jam comedy. It’s surprising how well the filmmakers pulled that off. ■