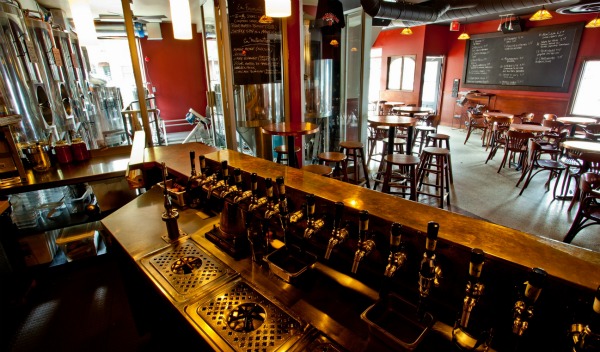 The annual Mondial de la bière, taking place down at the Palais des congrès this Wednesday through Sunday, is a behemoth of a beer festival: 475 beers from more than 85 breweries and more than 150,000 visitors filing through. If variety is what you’re after, Mondial’s the place, but the best way to get a feel for what Quebec brewers have to offer right now is at Off Mondial, when the city’s brewpubs and beer bars host events all week highlighting special beers, from smoked to sour. It’s the best time of the year to be a beer drinker in Montreal, but remember: Mondial week is a marathon, not a sprint, so plan strategically and stay hydrated. Here’s our game plan:

Smoked beers tend to fall into the ‘love it or hate it’ category, so there’s no better way to figure out what side you’re on than by trying seven in one go. The smoked beer night at la Succursale features three house beers, including the not-oft brewed traditional Polish Grätzer, as well as smoked ales from Hopfenstark, les Trois Mousquetaires, Loup Rouge and Brasseurs du Temps, plus smoked meats and cheeses.

Starting Tuesday, Cheval Blanc is tapping its Coco Bonheur, a luscious banana and coconut-infused IPA and the 7.5 per cent ABV Double Bonheur IPA, poured on nitro for extra creaminess. Try ‘em both for triple le bonheur.

Stop by Harricana for the release of its new house beer Red Hop Bomb. They describe it as somewhere between an English IPA and a barleywine, and it’s available on draft (at a precise 8ºC) or on cask dry-hopped with Galaxy or Topaz and Dr. Rudi hops.

It’s a reunion at Dieu du Ciel for La Soirée des Ex, where they’ll be pouring collaboration beers brewed with four ex-DDC brewers who have since moved on to other Quebec breweries, as well as a Dortmunder lager from current brewer Hugues Dumontier and a triple apricot ale from co-founders Jean-François Gravel and Stéphane Ostiguy.

Rosemont brewpub and bar Brouhaha is celebrating its seventh anniversary with special house ales like a barrel-brandy aged maple dubbel and a stacked draft list including beers from Dunham, Naufrageur, Bilboquet and more. Come for the many beers; stay for the smoked meat poutine.

Ten Quebec beers get the randall treatment (pushed through a flavor-boosting contraption with the addition of hops, coffee or whatever else you can dream up) at Off Mondial Extreme at le Saint-Bock. On the less extreme side, choose from eight beers from Beau’s, a traditional Belgian gueuze or St-Bock’s Double Malédiction, an imperial milk stout with cacao and vanilla.

Hopfenstark tasting room Station Ho.st puts on one of the most anticipated events of the week with its third Sour Beer Day. The draft list is TBA, but you should start and finish the night with Hopfenstark’s excellent thirst-quencher, Berlin Alexanderplatz Berliner Weiss, and scope out Ho.st’s new sidewalk terrasse.