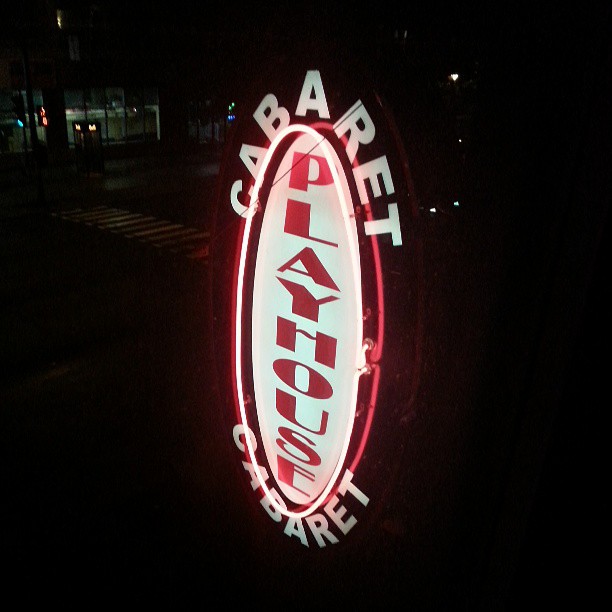 On Saturday morning, news spread on social media that another Montreal music venue — one that has been a hub for the LGBT scene hors Village since the closure of Royal Phoenix — was about to close. Cabaret Playhouse, located south of Bernard at 5656 Parc, hosted its last event on Saturday, June 20.

The venue’s booker/manager, Michel “Wax” Cyr, explained that he was on the verge of arranging the transfer of Playhouse from its current owner to a friend, the owner of Piranha Bar and co-owner of Frites Alors. This new owner would have renovated and redecorated the space and probably renamed it, but with Wax as manager, the venue would have retained its mandate: free rent and an open-door, first-come-first-booked policy and an openness to burlesque and other acts that involve nudity (Playhouse was once a strip club, and had retained a licence that allowed nudity). Unfortunately the woman who recently inherited the entire building (which also includes a Japanese restaurant) from her father prevented the transfer from taking place. Her plans are unknown, but it’s easily to speculate that she found a higher bidder.

Laura Boo, aka DJ Like the Wolf, who organizes the monthly POMPe LGBT parties at Katacombes (where Wax also works) wrote about the venue’s closure on Facebook, effectively alerting much of the (anglo LGBT) scene to the bad news. We contacted her for a more official comment:

“The fact that doing an event at the Playhouse was free and that it wasn’t a snotty bar run by folks who would look down their nose at you when you came to them with an idea is crucial to how it became what is was. Literally almost anyone could throw an event at the Playhouse, which is not the case at most other venues, who only want certain kinds of people and music in their spaces. You didn’t have to put up $500 for the rental or worry that you had to get 200 people just to break even. I think that it made the Playhouse a place to just TRY, which means that some of the weirdest, most fun, most radical parties have happened there, and also the biggest flops — but who cares, right?

“Wax was incredibly supportive and amazing — in my opinion he was the connection that brought people to the Playhouse. Without Wax, the Playhouse was just some weird bar that survived off of slot machines. But Wax booked queer parties and bands of all genres and brought in the goths and whoever else needed a space for some bizarre idea they had.

“I’ve lived in Mile End for a long time, and I grew up in Montreal in the ’80s and ’90s,” she adds. “In the last few years there’s been a lot of changes that, to be honest, have made me really sad. The Playhouse closure feels shitty for me because it’s part of a larger narrative of gentrification and the transformation of Montreal from a city that was full of possibilities for artists, weirdos, queers and broke people into a cleaned up tourist trap for affluent hipsters. Of course, I have to also recognize that the primarily white artists and queers who are feeling squeezed out now are often the first wave of change that sets the stage for later gentrification by rich people to happen, that we push out others before we ourselves get pushed out — see what’s happening in Parc Ex right now. So yeah, that’s a truth that needs to be spoken.”

Wax couldn’t agree more. Over the past six months, along with looking for a buyer for Playhouse, he has also been shopping around for a new space, and found it impossible to beat the strangely low rent that was being paid at Playhouse: it was only $2,000 per month, a fee that one edition of Faggity Ass Fridays could cover, according to Wax. Every other space he’s seen in Mile End has been at least double that, and with rising taxes — and the parking problems and off-island competition that has killed business at other cultural venues like Théâtre St-Denis — he’s even considered looking at space in the South Shore.

“The problem we have right now with Montreal  is the same problem that New York and Boston had 15 years ago,” he says. “The rents are going up and no one can afford anything anymore, especially the underground scene, which influences all the other scenes. I don’t even wanna go back to New York anymore because I used to hang out there when it was happening in the ’80s and I’m just afraid to be disappointed, because it’s dead now.”

So will Montreal turn into No Fun City (a label that hit Vancouver when many of its small venues shut down), or will city hall step in with more bail-out money for beleaguered venues? Or maybe lower taxes on cultural spaces, to stop the bleeding on the island? It remains to be seen, but Wax isn’t heading to the South Shore (or the Village, where he’s been exploring a potential space) just yet.

Having been a musician and booker in Montreal since 1979, Wax is a veteran of the scene, and has seen it shift, and shifted within it himself, promoting punk, metal and rockabilly as well as dance music and indie rock (Mac DeMarco played his first show at Playhouse, incidentally). Wax’s short-term plan is to find venues to host some of the events that he’d booked at Playhouse over the rest of the summer, and some of these events had already been relocated from other venues. Brace yourself for this: Wax revealed during our interview that four other Montreal music venues (that he could not name) will be closing down over the next month.

While these relocation efforts are being made, Wax and his friend (who was going to acquire Playhouse) are looking hard for a new space in or around the Mile End ‘hood.

“I’m a local promoter trying to help the local scene, and that’s what I’m gonna try to keep doing,” Wax says. “I just don’t know where. After 11 years (at Playhouse), I know everybody in Mile End, and and I wish I could stay there — my big loss isn’t even really the club, but my friends I probably won’t see anymore. But I’m not giving up. All the proposals I can get, I’ll study them, and if I can stay in or even near the neighbourhood, I will be happy.” ■

Anyone who has leads or suggestions for a new space to host music events (preferably around 150 capacity) can contact Wax here.