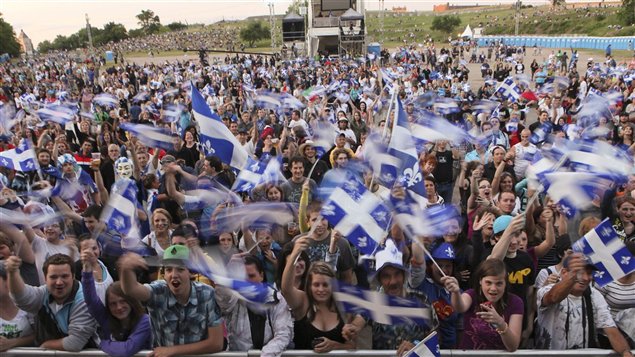 We should consider ourselves fortunate that we live in a society where there are apparently so few real issues to deal with that our politicians can spend so much time on trivial matters of little or no consequence to our daily lives.

Take, for example, Coalition Avenir Quebec MNA Benoit Charette. The former Parti Québécois politician last week called for the “depoliticization” of St. Jean Baptiste celebrations, complaining that too many of the speeches that precede the main events contain nationalist rhetoric.

Nationalist speeches at the Fête nationale? Shocking! Next thing you know, we’ll see Canada Day speeches that advocate Canadian unity and Father’s Day speeches that glorify paternity. Sure, people are running around waving flags, singing anthems,  painting their faces and expressing chauvinistic pride in their culture, but let’s not let any nationalism creep in.

On the other end of the spectrum are those who have imbued the Fête nationale with almost mystic powers. Complaining about a future 20 per cent budget cut for Fête organizers, some 181 Quebec artists, activists etc., signed a declaration in Le Devoir last week arguing, among other deleterious effects, that:

“Weakening the Fête nationale will assuredly diminish our sense of belonging, our solidarity as citizens, our trust in our institutions, our collective pride and, consequently, our capacity to integrate new Quebecers with confidence and openness.”

Ah. So I guess the discrimination in employment and housing faced by so many of these newcomers — not to mention insults and even assaults for wearing a turban, headscarf, grand boubou or veil — is all because our previous June 24 celebrations have lacked adequate budgets. There’s nothing like a big fireworks display to give us the strength to help turn our guests into good Québécoises and Québécois, trading in their kufis for tuques that, unfortunately, will never be available in pure laine.

Obsession over the trivial has often been the Achilles heel of Quebec language legislation, opening up the province to astonished ridicule from around the world when, for example, language bureaucrats try to tell an Italian restaurant that it can’t use the word “pasta” on its French menus. Although people like to blame Pauline Marois’s PQ government for that debacle, the action against the restaurant started when the Charest Liberals were in power, and the head of the Office québécois de langue française who was overruled and then fired by Marois over how she handled the case had been appointed by the Liberals.

Now that the Liberals are back in power, we’re once again talking about trivia rather than doing something about the most fundamental threat to the French language here: basic illiteracy. The Couillard government is squeezing school budgets and planning to impose greater workloads on teachers despite literacy rates among francophones that are not only lower than that of Quebec anglophones, but even lag behind francophones in Manitoba and Ontario.

But judging by the Liberals’ legislative agenda, the biggest threat facing the French language here is Walmart’s use of the word “supercentre” as a descriptor on its outdoor signs.

Reflecting international agreements, Quebec’s language laws have never required retailers with trademark brand names to change them to French, but a few years ago the OQLF decided that it would try to bully these corporations into tacking French phrases onto their signs. Some merchants such as Second Cup complied (three firebombings might have helped spur that along), adding the words Les cafés to a logo that already includes an image of a steaming cup of coffee. Others, including Walmart, Costco, Best Buy and Toys “R” Us, said non, arguing that Quebec’s own legislation doesn’t give the OQLF the power to force companies to modify their “marque de commerce.”

Many billable hours by many expensive lawyers later, both the Quebec Superior Court and then the Court of Appeal agreed that current Quebec language legislation doesn’t allow the province to force businesses to add descriptors. The simple solution, the Liberals finally realized: change the legislation.

Although the Couillard government hasn’t yet spelled out what its new legislation will entail, it had already begun suggesting the kind of silly compromises that make a mockery of the whole process, including subsidizing the costs to retailers like Costco of making the sign changes. It’s evidence of a government that is taking action because of pressure rather than conviction, trying to please everyone and consequently pissing them off instead.

The whole debate has been mislabeled as a loophole that allows these companies to post “English-only” signs, but the name Walmart is no more English than Provigo is French. It’s a brand name just the same as Ikea, Renaud-Bray or Dollarama. As such, it should be treated the same.

So unless Quebec wants to force Renaud-Bray to add the word “librairie” to all its outdoor signs, it should back off on this misguided proposal. The debate has nothing to do with promoting French and everything to do with diluting names that sound too English.

And if francophone consumers find it so upsetting that they don’t want to shop at Costco, there’s usually a Maxi just around the corner.