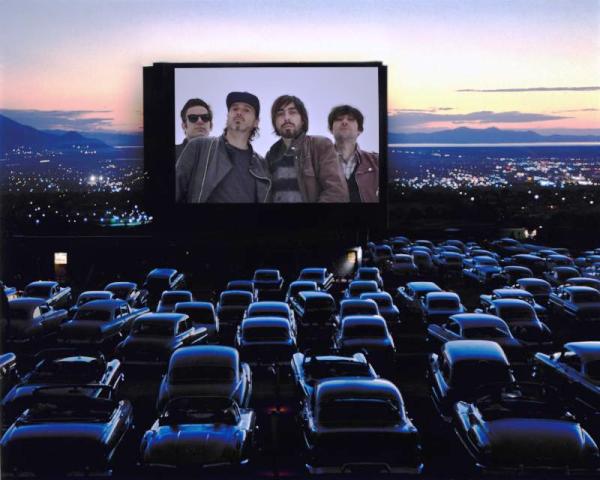 I recently had a chat with the band’s guitarist and co-songwriter Sam Goldberg Jr., of Broken Social Scene fame — he’s also a key player in Kandle and the Krooks and producer of local band Wizaard. We talked about fake band bios, karaoke gigs, express vs. laborious music production and a new music project that may or may not be a joke (but I’m really hoping it’s for real).

Lorraine Carpenter: Is it true that you recorded your first album [Middle Ages, 2012] in sleazy hotel rooms?
Sam Goldberg Jr.: That is not true. We wrote a joke bio for fun and my partner [singer-songwriter Jeff Edwards] embellished. When I was on tour with Social Scene, I didn’t really live anywhere for a while, so I would Airbnb all over the Plateau — I had a portable rig, and our thing for that record was to record a whole song and finish it within one session. Some of the places were kind of dumpy, but not sleazy hotel rooms.

LC: How was that process, forcing out one song per session?
SG: It was really fun. I played in too many bands where it’s so serious and it’s so much labour, so it was nice to have a concept: we’re gonna go in, we’re gonna write a song in a three-hour period and then we’re done. We recorded all the guitars and vocals, and we didn’t change anything. We tried to make the lyrics as tongue in cheek as possible, as dumb as possible on some songs. Before we knew it we had tons of songs.

LC: Did you make the new one the same way?
SG: Not at all. I finally got a place in Montreal, I was more settled, and it was way more work. It took about a year and a half to find the songs that worked together. We were going for more of a high-fidelity approach to try and find the right sounds for a cohesive piece. It’s hard making records; this one took forever, man. But I’m really happy with it — it’s a good front-to-back listen, and sonically I got some wacked out sounds. We’re not trying to change the political landscape, it’s more about setting a mood with the sounds and tones. The lyrics are pretty hilarious, too.

But still, when Jeff and I get together we’re like, “We’re gonna write a song today,” and that’s it. We laugh our asses off, we loop a verse, I write my verse, he writes his verse — so in that way  the process was the same as the first record, I just worked harder on the sounds, and we went to a studio and hammered it out with Jace Lasek, who’s a fun guy to work with — lots of laughs.

LC: Are you working on any new projects?
SG: Yeah, Tim Fletcher and I are doing this thing where the whole blueprint for the project is Marky Mark’s “Good Vibrations.” He’s gonna be the guy with his shirt off and I’ll be the guy behind him with the laptop and synths and stuff. Tim can just freestyle for days. He’s a big hip hop fan, he knows all the good stuff. I know all the cheesy ’90s mainstream stuff, so that’ll be the production style. We’re thinking about calling it DTF Crew — Dance to Freedom.

LC: Oh my God, okay. I’ll be waiting for that one. Back to Yardlets — you’re four on stage for the live show, right?
SG: Yeah, it’s me and Jeff, Tim Fletcher on bass and David Deias on drums. We actually play to backing tracks, so it’s slowly turning into a karaoke act where we’re basically gonna walk on stage and we’ll just be air-guitaring and maybe singing. There’s so many weird sounds that I wanted live but we couldn’t do it. I mean we can do it — we tried playing the songs without it and it was great, but we’ve never played with backing tracks before and we thought it was kind of exciting. A lot of people frown upon that ’cause it’s easy to get away with. Most people can’t even tell when backing tracks are going on.

We thought for our first show it would be cool to get a bunch of young kids to play the record and not even be there. We’d just walk into the crowd at some point and say, “These guys are great!”

Yeah, this project is kinda silly — it’s just fun. We’re having a good time with it. ■