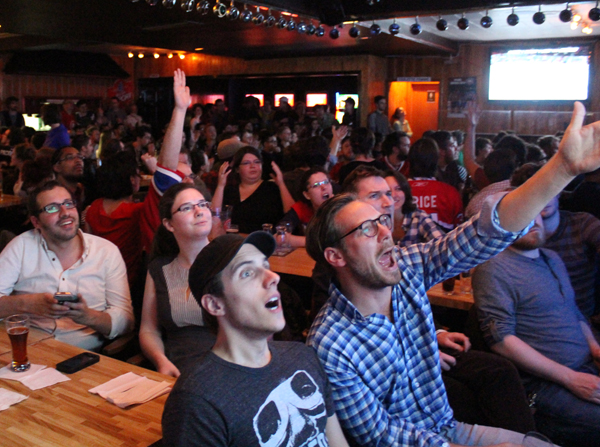 The crowd at Resto Bar Laurier, 2014. Photo by Lisa Sproull

Spring brings Montreal back to life after a long winter, from the first warm day without layers of clothing to the first drink on a terrasse. It’s also the season when the Montreal Canadiens contend for the Stanley Cup, a scenario that brings people together, from team talk with strangers to a smile on people’s faces excited about the next game.

I was watching game 7 against Boston last year in a packed Plateau bar where the pitchers of beer kept coming. The crowd twitched with tension at each line change, each Carey Price save, each time PK Subban touched the puck. I left halfway into the third period, my gut certain that Montreal would win. I grabbed a cab heading downtown to take photos of fans at the Bell Centre after the game. On almost every block I passed, bars and restaurants and other businesses had the game on, while the cab radio blasted the TSN 690 play by play. I didn’t miss a minute of the game, up until the remaining few minutes before victory outside the Bell Centre. This is the kind of moment that makes Montreal magical. And this Wednesday, we’ll be back in the moment.

Going out to watch the game with friends and being part of this ambience is a great experience, but playoff-watching requires a game plan. Rule #1: show up early, one hour early minimum. The deeper the Habs go into the playoffs, the earlier you’ll need to show up. You can ask a friend to reserve spots (within reason), but do reward their time with beer.

Here are some great places to watch playoff hockey:

Downtown bars will be full during the Habs’ run. It’s the pre-game drink before ticket holders head down to the Bell Centre to live out their playoff experience — that’s when you can rush in and grab a spot. I usually do the downtown bars when the Habs are ready to clinch the series, when I want to join the post-game street party. My go-to bars have been Brutopia (1219 Crescent) for the microbrew choices and three floors of space to watch the game. I do enjoy Ye Olde Orchard (1189 de la Montagne) for food and drink as well, and I was once served by the waitress whose homemade Mike Weaver shirt got tweeted about by Mike Weaver herself. 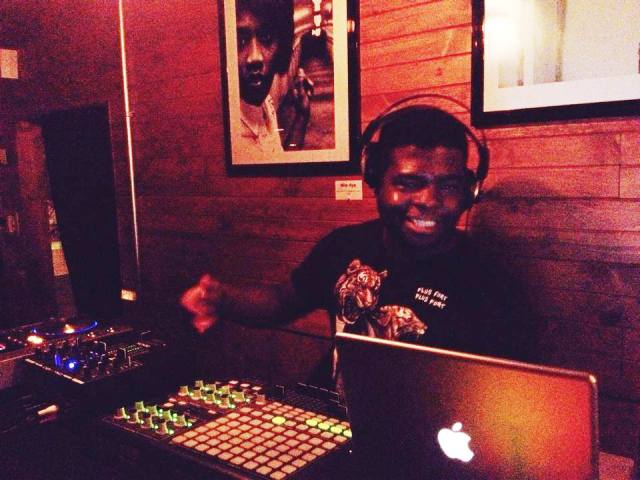 Resto Bar Laurier (266 Laurier E.) is exciting come playoff time. The old-school brasserie-style bar is alive with  nostalgia for what it would have be like watching hockey during the 1970s dynasty years. They’ve got big bottles of beer and a small kitchen with a new bar menu, including poutine with breaded chicken pieces. Brasserie Cherrier (3638 St-Denis) is the south Plateau’s equivalent. There are plenty of TVs and space for the many hours of hockey that will be happening. If you need to fill your gullet with some greasy eats, you can bring in food from the Lafleurs nearby. Chez Baptiste (1045 Mont-Royal E.) remains the Plateau’s institution for hockey watching. Consider it the Guy Lafleur of hockey bars.

With changes to Verdun’s bar laws for the first time in 138 years, the Southwest hood has become a new option for the playoffs. Artisan brew spot Benelux (4028 Wellington) is paving the way for playoff action in the south. Bar de Courcelle (4685 Notre-Dame W.) is the mainstay among the St-Henri bars. The modernized brasserie has a great atmosphere for hockey.

There’s plenty of hockey love at Bruno Sport Bar (313 Beaubien E.). They show soccer matches in the day but live for hockey by night, complete with church candles and a cross (because hockey is religion in Montreal). It’s a great atmosphere on the inside as well as the outside, as you can watch the game from the terrasse. Bar le Ritz PDB (179 Jean-Talon West) is the rookie of hockey-viewing, as they only started screening Habs games in March. With a giant screen up on the stage and drink specials, they’ll be a favourite in Mile Ex. 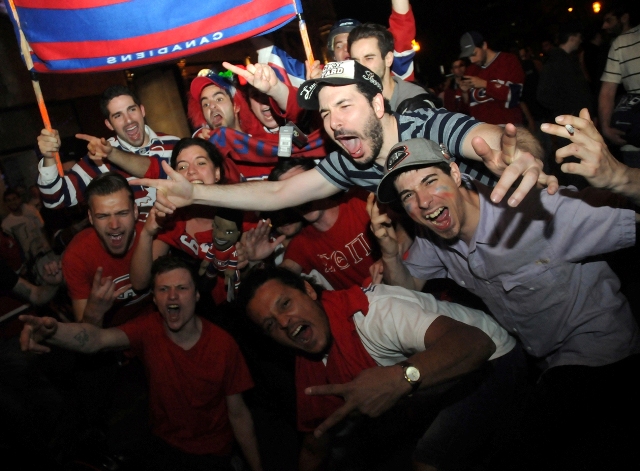 Barfly (4062 St-Laurent) may be a tight fit for the playoffs, but I give them points for great hockey spirit, with plenty of Montreal Canadiens memorabilia and of course cheap beer. I’ve enjoyed games at Foufounes (87 Ste-Catherine E.), mainly for the super-cheap happy hour. Even after happy hour, the beer is still so cheap, we can keep drinking to victory or to the next Habs power play.

Here’s to a long Habs playoff run, regardless where you end up watching the game. We’ll all be watching somewhere, and the magic will be there. Go Habs go!  ■