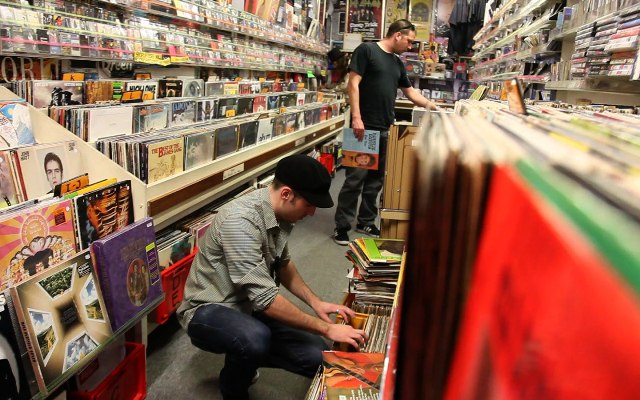 Music is an art, but it’s also a product. While it’s all well and good to support your favourite touring bands by buying concert tickets and a tshirt every now and then, most of us are freeloaders when it comes to listening to music at home and on our devices.

The return of vinyl is a (partial) solution to a lot of problems in the industry: it supports the artists (particularly those who choose to invest in producing vinyl) and the small local businesses that specialize in records. It’s also an aesthetically pleasing product, as easy on the eyes as it is on the ears. And the majority of new records come with a download code so you can still pack your devices with music (that you actually paid for).

(Tidal supporters, please try to convince me of this new thing’s worth because I’m not there yet.)

The annual observance known as Record Store Day will soon be upon us (Saturday, April 18), and though the day has its detractors (read Cult MTL columnist Johnson Cummins RSD pros and cons here), any occasion that shines some light on local record stores and vinyl is worth celebrating.

What follows is a rundown of what’s happening at Montreal shops, and my personal list of most interesting RSD special releases:

Expect lots of exclusive North American RSD releases in stock, as well as some of the French, English and German releases, PLUS the stores’s annual sale on regular stock: 5 per cent off one record, 10 per cent if you buy two, 15 per cent for three, 20 per cent for four and 25 per cent for five.

There will be a sale on regular stock, still TBD at post time. “The more you buy, the more you will save.”

There will be loads of RSD releases and a secret guest DJ at this downtown vinyl hotspot.

“Every day is Record Store Day at Death of Vinyl.” All used records, all the time.

This Mile End vinyl emporium promises 15% off everything in the store other than concert tickets and RSD special releases — they’ve posted their full list of RSD orders here.

Cross the street for a lot of RSD releases and all regular stock at 15 per cent off.

This heavy music mainstay is offering deals on new and used stock, and a curated selection of RSD releases will be available as long as quantities last.

Adam and the Ants, “Kings of the Wild Frontier/Ant Music”

A die-cut, star-shaped 7” from Mos Def and Talib Kweli.

A 7” picture disc in a custom-made pocket inserted into a Japanese-style, resealable clear plastic sleeve.

Classic post-punk with a South Bronx funk flavour, on the green, blue and yellow splatter-coloured vinyl, 12.”

Father John Misty, “I Love You, Honeybear (acoustic)”/“Never Been a Woman”

One of Rhino’s Side by Side releases, it’s the original version of the early rap classic backed by a U.K. punk cover. Red/yellow splatter on olive green 7” vinyl.

A 20th anniversary picture disc of the hard-listening 1994 album by the Welsh rock band.

OFF!, Live From the BBC

Nine pizza-themed Velvet Underground covers by Macaulay Culkin and the gang. (For the uninitiated, this is real).

Killer Mike and El-P offer up four tracks including one never before released (limited).

The very first release by Swans, from 1982, rereleased by Young God.

The White Stripes, Get Behind Me Satan

The duo’s 2006 album is being released for the first time on vinyl, specifically two 12” discs, one red and one white.