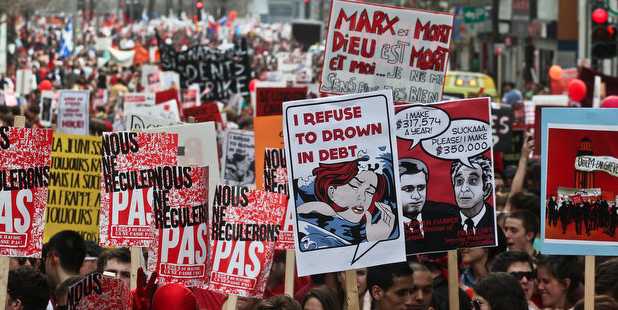 “The spring wakes us, nurtures us and revitalizes us. How often does your spring come? If you are a prisoner of the calendar, it comes once a year. If you are creating authentic power, it comes frequently, or very frequently.” — Author Gary Zukav

“We’re asking ourselves what strategy to adopt for the future. Our action mustn’t be limited to the spring. We really want to be heard on important social issues like the attack on social services.” — Camille Godbout, spokesperson for l’Association pour une solidarité syndicale étudiante (ASSÉ)

After the coldest winter since we started keeping records, spring seems to have stalled this year in Montreal, both literally and in the minds of some of the leaders behind the ongoing student strike. The executive of ASSÉ, the coalition of Quebec student associations often labelled “the most radical” during the 2012 student mobilization known as the Maple Spring, has asked its members to consider winding down the current protests and starting again in the fall.

The proposal, to be debated by ASSÉ member associations this weekend, is purely strategic and shouldn’t be interpreted as a softening of student resolve to challenge the austerity agenda of the fledgling Philippe Couillard government. It’s more about finding the best time to mount what student leaders have called a “social strike,” an attempt to build a broad public coalition aimed at stopping cuts in education, health and social services and putting the brakes on oil and gas exploitation.

The decision to start the strike this spring was admittedly a little perplexing, given that the students’ main allies — 550,000 public sector workers whose contracts only expired yesterday — were not going to be in a position to join any mobilization until after the unions had consulted their membership about the status of negotiations that have barely begun. Although there’s little doubt that the vast chasm that currently separates the government position and that of its union will inexorably lead to a strike, no one expected concerted action until this fall at the earliest.

So the students began the dance while their partners were still putting on their shoes. Now they have to decide whether the best course of action is to continue the solo routine and risk returning in the fall drained of energy, or to voluntarily withdraw until their natural allies are ready for a pas de deux.

Some English-language media are once more engaging in bizarre linguistic gymnastics to avoid calling the student strike a strike. Boycott is the favoured replacement, interspersed with various synonyms up to and including “strike” in quotation marks, as if putting it in air quotes makes it less than what it is.

Imagine the same obsessive energy being used to rebrand “hunger strike.” After all, isn’t it more accurately a boycott? And it’s a boycott of food, not hunger, so let’s ignore the historic roots of that form of protest and call it a “food boycott.”

The term student strike has been around since the Middle Ages. We all understand what it means, and the attempt to rebrand it is political, not semantic or even pedantic.

It reminds me of the time the former owners of the Montreal Gazette, the Canwest corporation controlled by the pro-Israel Asper family of Winnipeg, ordered all of their newspapers to stop using the word “militants” when referring to Palestinian activists. They were henceforth to be referred to as “terrorists,” Leonard Asper told senior editors. Conscientious objectors on news desks throughout the chain often “forgot” to enforce the directive, but others bowed to management pressure. The policy was quietly withdrawn after one of the chain’s wire services noticed the substitution in some of their stories and read the riot act.

That’s not to say there isn’t a legitimate debate about the differences between a student strike and a strike by an accredited labour union. Labour law makes it pretty clear what unionized strikers can and cannot do, whereas there is no legal framework governing student strikes. But labour strikes also existed long before legislation recognized them, and Quebec governments have implicitly and explicitly recognized the collective right of students to shut down their campuses in support of various causes for at least half a century.

In words of Serge Ménard, the former Parti Québécois justice minister and head of the government commission that reviewed the way the 2012 Maple Spring protest was handled:

Some universities and individual students have tried to fill the vacuum by using the courts to seek injunctions to order striking students to abandon the picket lines and barricades, as the Université du Québec à Montréal had done this week (decision pending). But as Ménard also notes, the flurry of injunctions issued during the last student strike were largely ineffective because campus administrations don’t have the means to enforce them and — unless criminal acts occur — police aren’t authorized to intervene in what amounts to a civil dispute.

Successful injunctions are thus a hollow victory and do little but escalate tension on the picket lines.

Whether students decide to put more spring in their steps or fall back until September, ASSÉ has called for a major anti-austerity mobilization tomorrow (Thursday, April 2) as part of a province-wide strike day and in concert with several major labour unions and social movements, beginning at 2 p.m. at Square Victoria.

“Anytime new insight replaces an old assumption or a fossilized perception is the spring. New understandings sprout, new tolerances appear, and new curiosity draws you to previously dark places. Just as the sun shines earlier and longer in the spring, changes that seemed impossible appear to be possible with each new insight…” — Gary Zukav