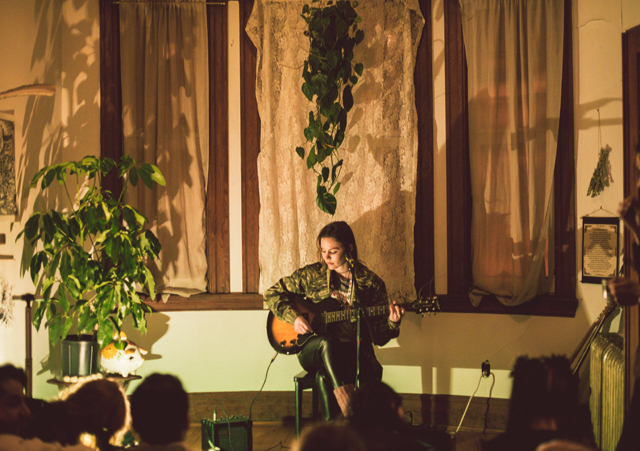 I was sitting on the floor at a Mothlight event and I was having one of those moments: bright-eyed nostalgia—for a night that was currently happening. You know what I’m talking about. It happens when you find yourself in a scene so perfectly set for ‘the memories’ that you’re already mindfully reminiscing, smiling like a middle-aged mom after a red wine.

Mothlight is a monthly house-concert series that showcases talented local artists, both emerging and established, and its setting is one for the mental scrapbooks. The series was developed with the goal of building a community, a network of conscious artists and music appreciators amassing at a personal level.  Now each event hosts around 40 or so people, and it’s growing grassroots style. It’s something you want to ask around about. Let me paint you a picture.

A dimly lit bay-window stage casts dramatic shadows around the featured musicians. Dozens of people fill the rest of the floor — some cross-legged, some draped across the couch at the back, others standing and leaning on walls as they peek through the hallway doors. The feature room is filled with the trappings of a vintage designer’s bedroom: found-trinkets tacked to the walls, cascading plants and wood trimmings. A cat.

It’s a nasty March night outside, of course, but the contrast only adds to the warmth of the indoor space, full of thick embarrassing socks and thawing faces. There’s a weird sort of kindness that pulses through the venue, different from a crusting Mile End dive. Perhaps for some, calling it “kind” is merely crapping on any serious artistic legitimacy, but no — it means that when you walk in you are immediately handed crafted sangria by one of the hosts. “Sorry it’s not cider,” he said to me, apologizing in actual earnest. Kind.

It’s not just the subtle warmth that smacks your fuzzy feelings, the ones many of us try to pretend away with quick-witted quips and ironic finger paintings. In such an intimate space, the music gets more personal, stripped down, raw—dare I say even say soulful.

“Music is so beautiful when you really get to pay attention to the idea of the artist, or their perception of their project. It’s so much more than just a noisy bar,” says Daniela Madrid, who started the event in November with her boyfriend Siavash Kolaei.

We’re not just talking biblical love ballads with ukuleles. Madrid tells me, “People come in and play who they are. We have some dark wave, new wave, grunge, acoustic, anything really.”

Take the first Mothlight concert I found myself at. It opened with local musician Paul De Rita, with his long dark mass of thick dreadlocks paired with an uncanny ability to smoothly work a guitar like Jimi Hendrix. Other artists recently featured were Ceilidh Michelle, a chick with cheekbones and a rad, delicate, grunge sound—sort of a lady Kurt Vile. And then LUKA from Toronto.  A brave, youthful-faced acoustic player who unashamedly encouraged people to ‘sing along’—which may sound like a recipe for awkward looks.  But it took LUKA all of one song to convince his audience that he is the next Leonard Cohen (or is Leonard Cohen).

During all this, you get to just sit. Relax. Some people even draw. It’s like hanging at home and listening to music, except it’s live and there are 45 other people.

Maybe that’s an understatement. What Mothlight really is, is a movement. A statement taking music away from the monopoly of the bars and clubs, then stripping it down intimately and accessibly for a community.

The next event will be held on April 24, featuring Alex Nicol (of local group Kurvi Tasch) and Vancouver native Johnny De Courcy. So do some investigating. Ask around. Dig on Facebook. I can’t give you the address outright, but when you finally stumble into the Mothlight community, your efforts will be worth your while. ■

If you are a musician interested in playing at a Mothlight event, please email Daniela and Siavash at mothlightevents@gmail.com