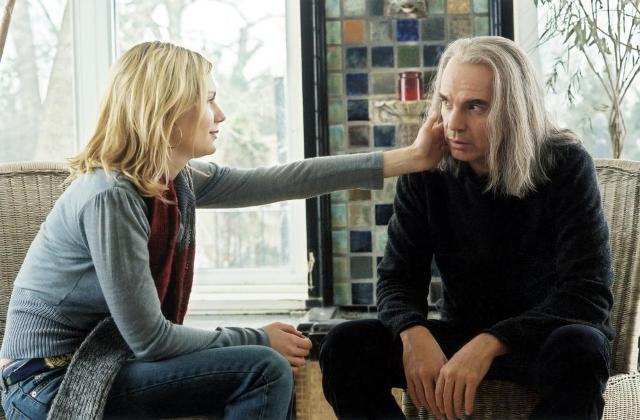 Does Montreal play itself? No. According to a bit of IMDB trivia, it’s meant to be Washington, D.C. This is never made explicit in the film but the locations mentioned have nothing to do with Montreal.

Most egregious local landmarks: The majority of the film is set near a community centre that appears to be somewhere in Little Burgundy (it’s likely that whatever it was isn’t there anymore — gentrification features in the plot ever so slightly). Holly Hunter’s character lives in an apartment on St-Cuthbert street, across the street from the shoe repair place. Square Victoria metro is also featured prominently, as is Jean Talon Market.

Notable local talent: There are not a lot of huge roles for local actors in this film. Standouts include the late Catherine Colvey as Dunst’s drug-addled former singer mother, comedian David Acer as a comedian in a club and a guy my girlfriend thinks she might’ve gone to high school with as one of the kids who frequent the community centre.

Levity is a movie that would be all but forgotten by everyone including myself were it not for a fateful day in 2002 where I threw up a gallon of orange juice in the parking lot of Ikea (or more accurately, in the backseat of my parents’ car which had just pulled into the Ikea parking lot). I had returned from a family trip in Ottawa with a vicious stomach flu that made itself known just as we pulled into the parking lot and spent most of the trip incapacitated in the back seat of my parents’ Volvo. I remember barely anything from that trip except that my parents parked on St-Laurent for some errand or other and when they returned, they informed me that they had seen a movie being filmed, and that that movie was called Levity.

I guess I saw Levity when it came out, but I had no recollection of whether it was good, bad, mediocre, life-altering or soul-sucking. I barely remembered anything about it except for the image of Billy Bob Thornton with long gray hair and the image of Kirsten Dunst in a rave. I saw it because I had almost witnessed it (this was a bigger deal at the time, when the closest thing to a movie set I’d witnessed was an article in the local paper explaining that Battlefield Earth had shot a couple of scenes in a field 45 minutes from my hometown) and promptly never thought about it again until it came up for this column. As I witnessed again last night, there was a reason for that.

Manuel Jordan (Billy Bob Thornton) has spent most of his adult life in prison for the murder of a convenience store employee in a robbery gone awry. He knows nothing but life inside prison, so he’s a little taken aback when he’s released after 22 years and forced out into the world. He falls in with preacher Miles Evans (Morgan Freeman, inexplicably forcing his dulcet tones into a ridiculous DMX-ish bark), who offers him room and board in exchange for work as a valet (Evans offers free parking to nearby clubgoers if they listen to his sermon). Jordan begins a tentative friendship with the sister of the man he killed (Holly Hunter), who does not know his real identity. Meanwhile, he also befriends a hard-partying regular (Kirsten Dunst) of the afterhours dance club that borders on Evans’ community centre.

Although it came out before Crash, Levity feels like one of the myriad overwrought issue dramas that came in the wake of Haggis’s Oscar winner. It’s as if writer/director Ed Solomon built a movie around the theme of redemption above all else — all of its characters and their motivations exist only to serve its handful of thematic largesses. Themes with a capital T are at the centre of nearly every line uttered in Levity. Solomon’s a talented writer, but it’s telling that the majority of his best-known work was in high-concept comedies like Bill & Ted’s Excellent Adventure, Men in Black and Charlie’s Angels. Levity similarly feels schematically constructed around set pieces, but instead of comic action, they’re long-winded speeches or dramatic epiphanies. Levity is mostly glum and humourless, a flavour that Solomon hasn’t really ever proved he’s good at — though the fact that he worked on the script for over 20 years cements this as ‘the serious one, the one that really means something’.

The disingenuous need to ‘say something’ also affects the performances of the talented cast, who are unfortunately given idea-delivering systems to work with in lieu of characters. Thornton might as well walk around the film muttering “redemption,” while Dunst’s mostly superfluous, half-in-the-bag character mostly serves to counterpoint how glum the rest of the film is. There’s some measure of enjoyment to be had watching Thornton and Hunter (two actors who have rarely been bad, even though they’ve been in their share of garbage) square off, but the sparks only fly intermittently as the characters are constantly driven back to their unwavering desire to be in a serious film about redemption.

Earlier today I accidentally stumbled into the set of the new X-Men film (they’re currently filming in one of the city’s more decrepit, stuck-in-amber malls — I’ll let you guess which one) and I barely batted an eye. Stumbling onto movie sets doesn’t have quite the cachet it did when I was 16, and neither does Levity. ■