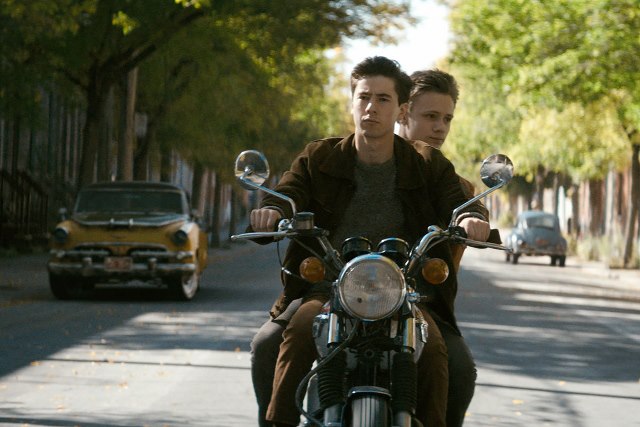 It’s interesting (though probably coincidental) that Mathieu Denis’s Corbo is being released this week. Militants are out in the street using extreme methods to fight for what they believe in (the act often overshadowing the actual point the act is supposed to be making), just like the protagonists in this movie. Meanwhile, young people are leaving their middle-class families to join ISIS to the great confusion of the rest of the world. While the question of Quebec’s independence has never been laid to rest, it’s not what shines through Denis’s film the most in my eyes. Corbo is far from an apolitical film, but what’s most compelling about it is not the political particulars of its story but its universal timelessness. It’s about the FLQ, sure, but it’s also about just about any young person overcome by alienation.

Jean Corbo (Anthony Therrien, whose smouldering intensity and scarred upper-lip will inevitably draw comparisons to Joaquin Phoenix) is the 16-year-old son of a well-to-do notary of Italian descent (his mother is Québécoise). Jean’s family lives in a nice home in TMR, he attends the best private school and wants for nothing, yet Jean never feels at home. His Québécois classmates don’t accept him because of his heritage, and the fact that his father (Tony Nardi) and grandfather (Dino Tavarone) would rather brush their past spent in internment camps in favour of quietly assimilating into society disgusts him. Ostracized at school and feeling increasingly hostile towards his own Italian heritage, Jean falls in with a couple of working-class kids from St-Henri (Antoine L’Écuyer and Karelle Tremblay) who bring him into the world of the burgeoning Front de libération du Québec, a militant organization that uses extreme methods in their fight against anglophone oppression.

Denis is obviously sympathetic to the separatist cause (his previous film, Laurentie, even more explicitly so)  — the film has a militant stance without feeling like too much pamphleteering. (Suffice to say that if you’re the kind of person who comments on CJAD articles in earnest, there’s nothing for you here.) Denis does tend to rely too much on long swaths of voice-over narration taken from FLQ missives or Frantz Fanon’s writings to properly anchor the film’s politics. These sequences tend to be tedious and befitting of a film on a more epic scale, where the majority of Corbo’s strengths lie in its intimacy. Jean Corbo was barely a footnote in the history of the FLQ — his major contribution to history is the fact that he barely made a dent. He’s no folk hero or martyr, but simply the inevitable casualty of youthful militancy.

It’s an interesting way to approach a period as troubled as Quebec in the ’60s. It’s difficultly to properly comprehend the extent of the discontent these days but easy to identify with Corbo’s alienation and the difficulty of fitting in. Denis’s mise-en-scène is precise and no-nonsense, with a few key scenes being almost unbearably suspenseful. Despite a fairly limited budget, he brings a real sense of place and time to the film’s setting. There have been great movies about that period in Quebec history (Les ordres) and at least one dubious CBC miniseries, but by focusing on Corbo and the very early years of the movement, Denis brings out the humanity of the struggle in a way that should appeal to even the staunchest of federalists. Or so you’d hope. ■