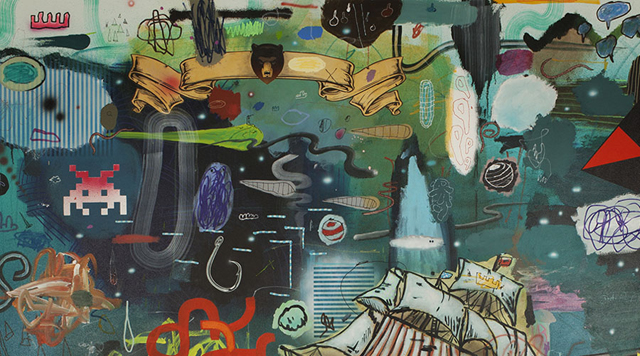 The arts scene is getting an early start this week, with several events happening Wednesday, and leading into a busy weekend. The end of the school year means plenty of chances to see works by some of Montreal’s best up and coming emerging artists. Let’s have a closer look at some of the new shows opening this week!

Around the corner, check out a solo show of paintings and installations with an environmental theme by Pierre-Étienne Massé at Espace 40 (Mile End). 160 St-Viateur E., #108, Wednesday, April 15, 5 p.m.

If you’re near Concordia Wednesday, make sure to stop by the EV Building’s Mouseprint Gallery for a group show that gives you an intimate look into the sketchbooks of the participating artists. An accompanying publication will be launched during the vernissage. 1515 Ste-Catherine W., EV-9.416, Wednesday, April 15, 6–8 p.m.

You can also catch a special screening tonight at the Cineplex in the Forum, showing a special doc with detailed views of the works of Vincent Van Gogh, commemorating the 125th anniversary of his death. The film will be shown again on April 26. 2313 Ste-Catherine W., Wednesday, April 15 and Sunday, April 26, 7:30 p.m., $17

On Thursday, you can catch a vernissage for a new show by Sophie Jodoin at Battat Contemporary with mixed-media works gathered around the theme of “a certain emotional instability.” 7245 Alexandra, #100, Thursday, April 16, 6–8:30 p.m.

The highlight of the week takes place Friday with the opening of From Age to Age, as Its Shape Slowly Unravelled by Vancouver-based Raymond Boisjoly, who was just longlisted for the 2015 Sobey Art Prize. In this exhibition at VOX Centre de l’Image Contemporaine, Boisjoly has produced a series of prints by attempting to scan an archive film as it played on a mobile phone. The resulting obfuscation of the source film serves to illustrate the 1953 anti-colonial movie’s message about the decontextualizing effect of “artifying” another group’s culture. Also on view will be the film Curtains by Lucy Raven. 2 Ste-Catherine E., #401, Friday, April 17, 5 p.m.

Or, head to the Belgo Friday to check out textile-based works in a thesis show by Concordia’s “Advanced Fibres and Material Practices” students. The show is split across Les Territoires (#527) and Rats 9 (#530). 372 Ste-Catherine W., Friday, April 17, 6 p.m.

In Mile End on Saturday, head to Optica for a vernissage for Polyphonies, a combination of video, performance and participatory works that address how we portray our identities through speech. The vernissage includes performances by Anne-Marie Ouellet and Sophie Castonguay. This exhibit also offers you the chance to participate in an interesting event: a dinner party, conceived by artists Dave Ball and Oliver Walker, where eight participants who have never met are split, with four together at one table and the other four alone in different closed rooms. The four lone guests ‘talk’ to each other by relaying words via telephone through the four seated guests. A dinner in English will take place April 21, and you can reserve your spot by contacting Optica here. 5455 de Gaspé, #106, Saturday, April 18, 3–5 p.m.

Alright, if you’re still with me, I’ll share with you a PSA from Studio Béluga, which is seeking artists to submit proposals for next summer’s Possible Dimensions exhibition. The studio is offering a couple of attractive prizes for emerging and mid-career artists to take advantage of professional technical support, transportation and the like to help realize your dream project. Check here for more details and apply by April 30.

Don’t forget to check the full listings below for more openings, last calls and ongoing shows!

Have Fingers Will Travel – A Tribute to Oliver Jones – Group Show

The Stranger Who Licked Salt Back Into Our Eyes – Brent Meistre

The Beauty in the Banal – Martin Ouellette