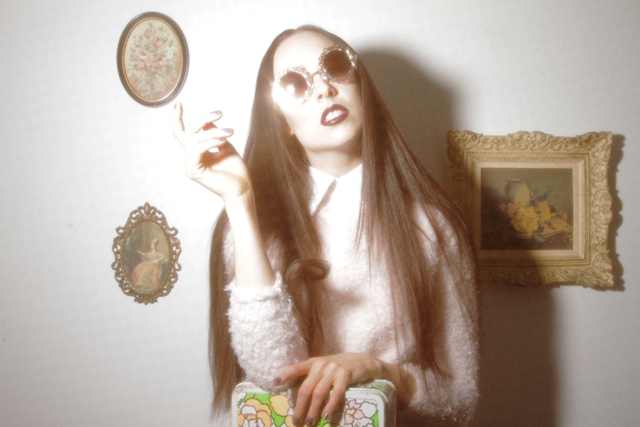 From one angle, aspiring pop star Allie X seems to have emanated from the same realm as Lady Gaga and Lana del Rey. Her music was co-created with producer/songwriters Cirkut and Billboard (who’ve worked with Miley Cyrus, Britney Spears and Katy Perry), her career propelled by an ambition (and small marketing army) that has transformed a person into a persona, all of it launched into the world last year with a Tweet by Katy Perry, who called Allie X’s song “Catch” her “spring jam.” (See the videos for “Catch,” shot in Montreal by Jérémie Saindon, and “Bitch” below.)

Seen from another angle, the L.A.-based Toronto musician born Alexandra Ashley Hughes (aka Allie Hughes) might just be using pop channels to sneak conceptual art into the mainstream. (The same thing Lady Gaga supposedly does, but probably in a less cartoonish and derivative way. Probably.)

Allie X’s CollXion 1 album was released by Universal Music on April 7, and this week she premieres her live show — her first ever live performance — with a two-day residency at the Phi Centre. (A member of the Cult MTL team saw giant tentacles emerging from the venue yesterday.) I spoke to Allie X about her vision, inspired by the Jungian shadow self, and what we can expect from her Montreal spectacle.

Lorraine Carpenter: So how did your music career begin?
Allie X: I’m sorry to start the interview this way but I don’t actually answer questions about my past. I’ll say that I’ve always been an artist and a musician.

LC: To get an idea of where you’re coming from as an artist, what current musicians do you respect and admire?
AX: I’m influenced primarily by artists of the past. I love Giorgio Moroder, Mark Mothersbaugh from Devo, Wendy Carlos, Bjork, Cyndi Lauper, Tom Petty, John Williams and I’m actually a big fan of Broadway musicals as well.

LC: It’s remarkable that you’re making your live debut this way. Why did you sidestep the conventional approach?
AX: I’ve had a vision of what I’ve wanted to do since the beginning, but I’ve hesitated to do a live show because the vision I’ve had has been rather ambitious and I haven’t had the means prior to connecting with the Phi Centre.

It’s been really incredible to [work with] these people that are likeminded in trying to create something on a multimedia platform. It would’ve been easy enough to do a rock set-up and have a keyboard player, a drummer, a guitarist and a bass player and try to recreate the songs, but I really wanted to do something more in-depth and visual and conceptual and the Phi Centre was on the same page, so finally here it is.

LC: What can you tell me about the show, and the residency?
AX: The first thing I’ll tell you is that with CollXtion, I’ll be releasing chapter one of the story of X.

The story of X involves a girl who can see her shadow and they have a very special relationship. They love to sing and they love to spin and one day they’re holding hands and spinning around and they spin so fast that they lose grip and end up switching places — the girl is in the shadow world and the shadow is in the real world pretending to be quote unquote “real.” That’s basically where chapter one starts.

A lot of what we’re doing at Phi is in reference to this story that I’m telling, and the story is an autobiographical abstractified piece. You’re going to be seeing references to the villain of the story, which is TSN, the Shadow Nose — like the nose on your face — so you’ll be seeing some noses, you’ll be seeing a chorus of people who represent the shadow people. There’s also the wizard of X, who is the sexless, neither-good-nor-evil guide to the X world, and the wizard will be represented in various forms.

It’s going to be very interesting. ■

The 48H Allie X residency is also an online experience.