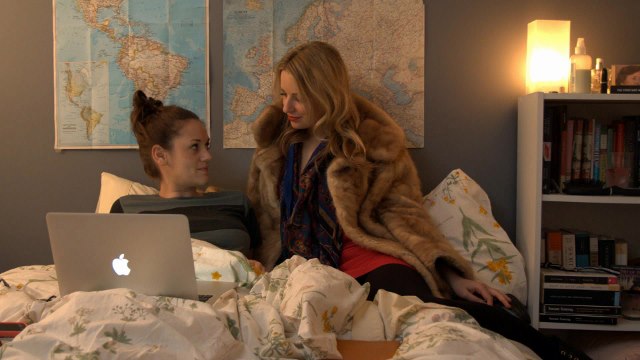 After exploring the world’s most elastic mother-daughter relationship in the web series Hot Mom, the writers and founders of creative collective Babe Nation — Lindsay Tapscott and Katie Nolan (a Concordia theatre graduate) — turn their eye to the world of sugar dating with their prospective new series, Sugar Sisters. Sugar dating refers to an arrangement wherein a younger woman agrees to date a wealthy (and usually older) man whom in turn gives them gifts and/or money. Nolan stars alongside Karen Knox in the teaser produced with the help of Montreal-based production company Muse Entertainment (Being Human, Helix) in the hopes of finding funding for a full series.

Alex Rose: What was the inspiration behind Sugar Sisters?
Lindsay Tapscott: It’s always been an idea that has interested me: why people do sugar dating, what it takes to do it, what’s really wrong with it, what isn’t and so on. And I think every girl has thought, at one point or another, “Could I do this?” A few years ago, I signed up for a sugar daddy dating website to check it out because I knew I wanted to write something about it — I just didn’t know exactly what. When Katie and I were brainstorming ideas to pitch to Muse, I suggested a show about a girl who signs up for a sugar daddy dating website to enhance her finances and Katie had the idea of making it about two girls who were roommates doing it together for support, and it just kind of took off from there.

AR: How did your experience on Hot Mom inform the creation of Sugar Sisters?
LT: While we were making Hot Mom, we were both inspired by collaborating and being creative with other funny, talented women, and we decided that we wanted to keep making content that showcased these bad betches (funny, talented women) both in front of and behind the camera.
KN: Totally. And Lindsay and I have identified that we are pretty fascinated with female relationships as a whole. While Hot Mom was one kind of very specific female relationship, the bond between Alex and Dana (our sugar sisters) is very different, but just as strong and funny. The term “female shares” is something we explore on a regular basis –– that is, nothing is hidden, everything is fair game to talk about.

We are also really interested in writing a show for the web that people (mainly our friends) will actually watch. When High Maintenance came out, I think everyone was like, “Oh whoa, a web show that doesn’t feel like a web show” and that is definitely what we want to do with Sugar Sisters. We’ve had countless discussions with all sorts of people (both male and female) about the topic of sugar dating and there is no singular answer or POV––we want to take all of them into account when making this show. The content is super controversial as well and we know that not everyone is going to like it, but we want to make it anyway.

AR: Without spoiling too much, what kind of things could we expect from the eventual series of Sugar Sisters?
KN: Oh boy, all sorts of things. We are treading a fine line between dealing with a somewhat serious topic, but keeping it light and funny, so there are lots of possibilities. As the two girls are opposites to some degree, the dates they go on will differ greatly from one another. Everything has been thrown on the table (literally, we work at our kitchen table) from the girls going to a swingers club and having very different experiences, to run-ins with family members and acquaintances, to when one of the girls discovers she is dating a colleague of her mother’s, to dealing with the emotional core and vulnerability of the topic as well.
LT: It’s a very big, very complicated subject, so there’s a lot we can and want to do with the series. In terms of the larger scope of the show, what we want it to do is maybe challenge people’s preconceived and fixed ideas of sex work. Challenge may be a strong word, but at least to get people to ask themselves why we have these ideas and consider another angle.

AR: What’s the ideal potential outcome for Sugar Sisters?
KN: We want our own TV show. But seriously. When we took this idea to Muse initially, we pitched it as an idea for a longer format TV show and Jesse (executive producer Jesse Prupas) was like “K girls, let’s take it one step at a time.” So we decided to incubate it as a web series to gauge audience interest and possibilities. But ideally, Lindsay and I want to write television — although the web is so hot right now, and we aren’t going anywhere in that regard — and we think this could be a fantastic and bold first project. Also, we would like all of the monies, please. We paid for Hot Mom out of pocket and via an IndieGOGO campaign, so we are very focused on funding our future projects properly.

LT: We hope that it’s a step toward being a voice for women, both millennial and otherwise, which is something that inspired us to create our company Babe Nation, a collection of work by creative women. ■

Watch the Sugar Sisters teaser over at the Babe Nation YouTube channel. An official website and Tumblr will appear shortly. You can find Nolan @KatieBirdNolan and Tapscott @lindsaytapscott  on Twitter.

Michael Kovrig and Michael Spavor have finally been released.

Another spooky series by Mike Flanagan, a Netflix horror movie by a Montreal director, Jon Stewart’s new show and more.