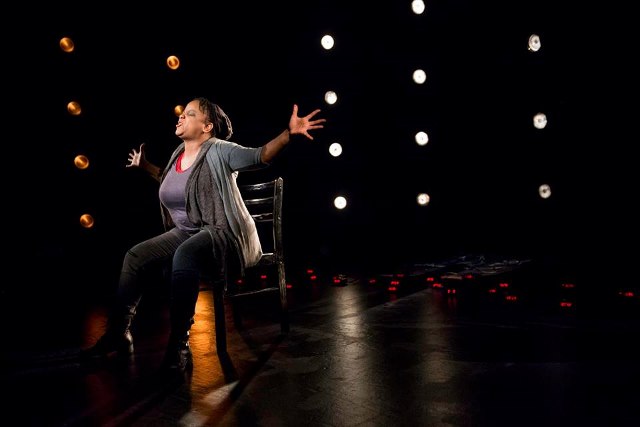 The first half of debbie tucker green’s creation follows a day in the life of a British family in tick-tock fashion. The talented Lucinda Davis, who plays all four members of the family and the people they encounter, does a time check as the characters awaken and go about their day. The minutes tick upward until tragedy strikes, and time evaporates.

Brit playwright and screenwriter tucker green composes stories about contemporary violence and its aftermath in stripped-down but intimate settings. This 2008 play, her seventh, was loosely inspired by a rash of deadly stabbings of young teens in public London around that time.

The characters at the centre of this play are part of a Caribbean-British family living in an urban area. It’s a normal day: the teen son struggles to get out the door on time, his big sister prepares for work and thinks about her boyfriend. Mother burns the porridge, while father settles into his day.

The many characters of Random give Davis a chance to flex her muscles in this Black Theatre Workshop/Imago Theatre production. During a Friday night talkback, she said that repetition was key to nailing down the myriad characters and quick pacing.

Yes, rehearsal is important, but so is the talent to incarnate the many voices, accents and physicalities. As one critic for The Guardian wrote of the 2008 London production, the show hinges on the solo performer. This production flies with Davis as the lead.

Davis said that when she began working with director Micheline Chevrier, developing the voices of her characters — the Caribbean patois and British accents — came first, followed by movement. (Of note: Davis is remarkably spry for someone who has recently suffered a broken ankle.) 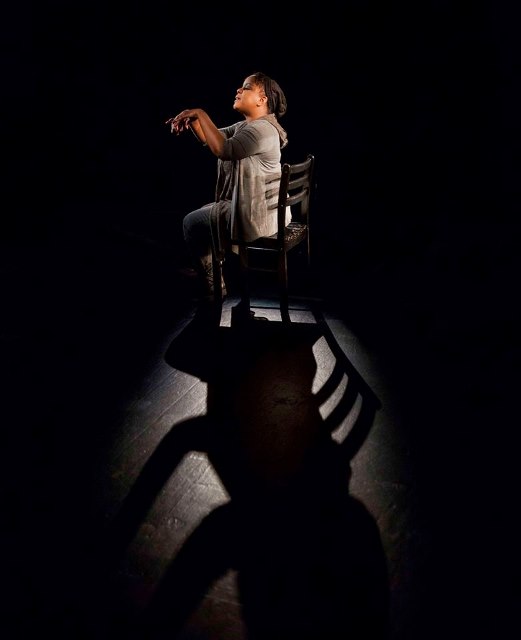 tucker green pokes fun at daily life, while also elevating it into the ethereal; Davis slows down when the mother beautifully clears away bowls of burned cereal. The big sister plugs away at work while observing the absurd intricacies of her office mates’ work politics.

The design follows the lead of previous incarnations of Random — minimal but effective.  Pierre-Étienne Locas’s set allows us to build the story in our minds, while Martin Sirois’s lighting subtly moves the story along.

Despite its depiction of the tragic death of a young black man, Random is not issue-based, at least not according to tucker green. As a black Brit, she was writing about a black British family. Davis has subscribed to this, saying that she is simply telling the story of a family struck by violence.

But as the simplicity and quick pace of the play forces the audience to pay close attention, Random also allows you to ascribe any issue — race, violence, politics, youth — onto its bones for further consideration. ■