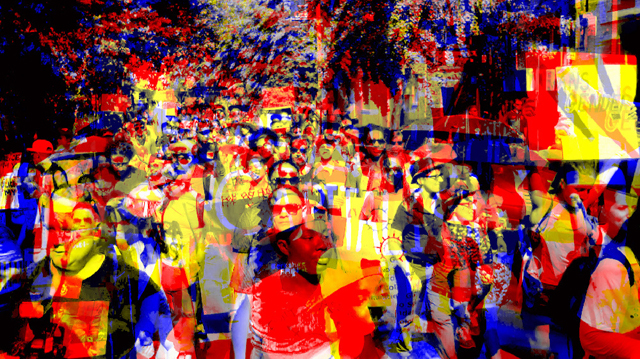 Striking students aren’t the only people keeping Montreal radical this week. The city is also right in the middle of Radical Queer Semaine, the annual 10-day festival of workshops, discussions, film screenings, special guests, performances and parties that carves out space for queer individuals from across the gender and orientation spectrums to inhabit their identities and support others who are doing the same.

With activities beginning last Thursday, March 19 and running until Sunday, March 29, organizers are presenting over 35 different events that seek to foster dialogue about issues affecting queer and trans people with an emphasis on anti-oppressive and anti-hierarchical politics and social action.

Last week we caught up with organizer Antoine Damiens at queer-friendly Cagibi to find out more about this year’s programming.

“Radical Queer Semaine has one goal, which is really about opening up spaces,” Damiens says. “Whatever seems to be interesting and fosters debate or dialogue on LGBTQ or feminist culture, that’s what we do. There’s really diverse programming this year.”

That programming includes a special look through Montreal’s history of gay rights activism, especially during the 1970’s after escalating police raids on gay bars and efforts to displace gays from tourist areas in the lead-up to the 1976 Olympic Games spurred the gay community to political action and regroupment in what’s now the Village on Ste-Catherine Street. Several events throughout the week incorporate a nod to the work of previous generations of activists, even as the Village itself becomes less and less important as a refuge for queer individuals as social attitudes have become more accepting of diversity. In collaboration with Radical Queer Semaine, the Quebec Gay Archives on Amherst Street held an open house on Sunday, March 22 for interested parties to learn more about this history.

“There’s a generational shift where lots of people in the queer movement between 15 and 30 don’t have a connection to what’s happened before in Montreal,” Damiens tells me. For those who missed the open house, there’s another opportunity to explore the past at tonight’s film screening event, where Concordia’s Thomas Waugh will show some examples of ’70s-era “jerkoff art-porn” and discuss the subgenre’s links to current trends in self-produced media sharing. Tonight’s double-header also invites filmmaker and scholar Nguyen Tan Hoang to screen and discuss a series of shorts that explore the intersections of race, gender and sexuality for Asian-Americans and Bottoms (Espace POP, 5587 Parc, March 24, 9 p.m.).

Radical Queer Semaine is also collaborating with LGBT film festivals Image+Nation and Massimadi to present a screening on Sunday, March 29 of History Doesn’t Have to Repeat Itself by Stéphane Gérard, a look at inter-generational solidarity across decades of queer activism in New York City (AIDS Community Care Centre, 2075 Plessis, March 29, 6 p.m.).

Besides film screenings, the program includes workshops on DIY queer cinema, experiences of femmes of colour, criminalization of HIV non-disclosure, queer families and parenthood, and celebrations like Faggity Ass Friday and Gender B(l)ender.

Radical Queer Semaine fills a gap left by Montreal’s more mainstream LGBT festivals like Pride Week and Divers/Cité (which rumour has it, may not return this year). According to Damiens, these events aren’t particularly inclusive to many marginalized communities within the larger LGBT rainbow.

“Pride Week and Divers/Cité are really corporate nowadays, and all about product placement and the ‘normativ-ation’ of our sexualities and gender identities,” Damien says, using the campaign for marriage equality as an example of a goal that reinforces rather than dismantles hierarchical and patriarchal social norms.

“We want to explore marginality and what happens at the borders between our different identities and what happens when we do not fit with traditional discourses. It’s more about opening a space where we can talk about who we are and who we want to be, rather than trying to find a political voice in order to be included within capitalistic normative structures.” ■

Radical Queer Semaine continues to March 29 with daily events. More information and full programming can be found on the official website and Facebook page.