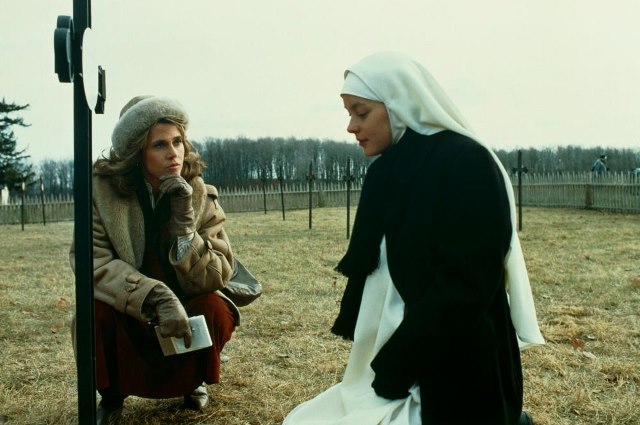 Jane Fonda in her sleuthing hat, with Meg Tilly

Does Montreal play itself? Yes. Though most of the action actually takes place in Berthierville (and the Berthierville convent scenes were shot in an old private school outside of Guelph), Jane Fonda’s office and home are in Montreal.
Most egregious local landmarks: It’s a veritable cornucopia of recognizable landmarks. Fonda’s office is at 2085 Union, just down from the McGill music building on Sherbrooke. The court is played by the Ernest Cormier building on Notre-Dame, and one of Fonda’s searches for clues happens in the Saint-Sulpice Library on St-Denis. Of course, this being a movie about religion, the very first establishing shot of Montreal has the cross on the mountain in the foreground.

Notable local talent: The most notable cast member by a wide margin is Gratien Gélinas, who plays the wizened alcoholic priest Father Martineau. Gélinas was a major radio and stage personality in the 1940s, developing a style that still resonates in Quebec culture today. He acted in film infrequently, and his appearance here is his only documented appearance in an English-language film. (He’s also Mitsou’s grandpa, for what it’s worth.)

The religious procedural hasn’t had a particularly illustrious career on film. Investigative paranormal-type things do okay in the horror world, but would-be realistic investigations of religious phenomena is something that seems better suited to the written word, mostly because the unknowability of religion doesn’t really jibe with the straightforward search for answers of a procedural. There’s no CSI: Vatican City for a reason: they’d be way too tempted to end each episode with an unknowable potential miracle and the camera helicoptering around characters staring at a celestial light pouring from the heavens. That’s one of the many problems that afflicts Norman Jewison’s Agnes of God, a film that attempts to answer difficult questions in the easiest ways possible.

In a convent outside of Montreal, a young nun named Agnes (Meg Tilly) is found with a dead baby in her room. Evidently, she gave birth to said baby and immediately killed it, prompting a criminal investigation. Dr. Martha Livingston (Jane Fonda) is the psychiatrist tasked with getting sufficient information out of the suspect for an insanity plea. The other nuns understand Agnes to be simple-minded and naive, yet they remain fiercely protective of their privacy and wary of a scandal breaking out. Livingston tussles constantly with the convent’s Mother (Anne Bancroft), who’s convinced that this chain-smokin’ (there’s so much chain-smoking in this movie that Benson & Hedges gets a shoutout in the credits), power-suit-wearin’, city-dwellin’ urban woman doesn’t have the nuns’ best interests in mind.

It’s evident from the get-go that Norman Jewison and screenwriter John Pielmeier (who adapted his own play) want to explore deep issues of faith and morality. Jewison even goes as far as to hire Bergman’s cinematographer, Sven Nykvist, to give it that perfectly depressing, introspectively Scandinavian look, but the film’s headier themes are constantly at odds with its pedestrian investigative construction. Roger Ebert made the same observation in his original 1985 review, but it’s still completely relevant: Fonda’s character is essentially a cynical, middle-aged Nancy Drew. There’s even a scene where she investigates a secret passageway while holding a candle. Agnes of God has the trappings of a genre that provides answers but doggedly refuses to play into them.

This also means that Agnes of God is tonally inconsistent at best, alternating between shouting matches between Fonda and Bancroft (definitely a holdover from the play), legalese banter between Fonda, the cops and the judge, extended psycho-religious freakouts from Tilly and a few bits of comic relief (including an incomprehensible riff where Fonda and Bancroft giggle themselves into a stupor by imagining saints smoking tobacco). There are definitely great moments within Agnes of God (most of them involve Tilly, and precisely none of them involve Fonda in her fur hat stalking around looking for clues), but the great majority of it is just contradictions, tonal shifts and half-assed moral exploration.

There is something that’s interesting about Agnes of God in the way that it utilizes Montreal. It’s one of the only films I’ve reviewed here that really goes for a bilingual feel. Fonda only gets a couple of lines in French, but the great majority of the supporting cast expresses themselves either in French or heavily-accented English. We get to see the city quite a bit, but more importantly we really get to hear it – and not some horseshit utopian version where everyone speaks in flat international French or only extras meant to be ridiculed speak French. Along with The Pyx, it’s one of the more linguistically realistic entries in the Made in MTL canon. ■