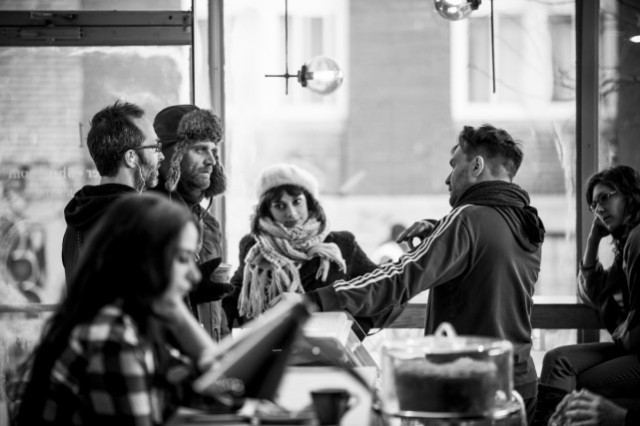 Rafaël Ouellet with Andreas Apergis and Sophie Desmarais on the set

Rafaël Ouellet’s Gurov and Anna belongs to a subgenre of fiction that’s so specific and so infrequently seen that I’m not even sure there’s a name for it. It’s based on Chekhov’s short story “The Lady With the Dog,” but it isn’t an adaptation or a reimagining or anything like that. Chekhov’s story permeates both the text and subtext of the film; its characters are both obsessed with the story and doomed to live it out in a way that really essentially informs every minute of the film. It works within the narrative in the same way that the Bible informs a Tyler Perry movie — it’s not the same story, per se, but it wouldn’t exist without it.

Ben (Andreas Apergis) is a middle-aged literature professor with a wife (Marie Fugain) and two young daughters. Ben’s not exactly the eccentric prof or deadbeat dad that he sometimes appears to be — he loves his daughters, but his marriage is tense at best. The love he once shared with his wife has been mostly replaced with a tenacious, stressed-out familiarity, and he finds himself smitten with Anna (Sophie Desmarais), a young boho student of his who bears a striking similarity to the lady in what he considers the best short story ever written, the aforementioned Chekhov piece. The two embark on a clumsy affair that’s clearly life-changing for Ben but more of an ill-advised fling for Anna. As the tryst moves towards its inevitable end, Ben grows more obsessed and desperate to come out on the other end with something left of his life. 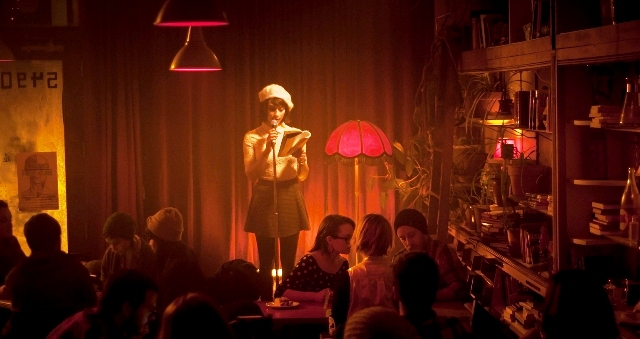 Desmarais in Gurov and Anna

There are superficial similarities between this and any number of prof-seduces-student works by old swinging dicks of the American literary guard like Philip Roth (Barry Levinson’s adaptation of Roth’s variation on this, The Humbling, just hit DVD last week) but writer Celeste Parr turns the tables on the characters. Anna is a significantly more mature character than Ben. He’s the one who’s impulsive and lovelorn and prone to acting out illogically —/Ben doesn’t really have anything to teach Anna, though he thinks that he does. It’s a neat inversion of a played-out (and frankly, kind of gross) trope that gives the film an interesting perspective.

Where the film is less successful is in its emotional core. Despite the best efforts of Apergis and Desmarais (who give great performances), the film is emotionally cold and distant. It’s inevitable that a film about a cold, distant affair that’s already imploding before it begins won’t exactly be The Notebook (nor would I, or anyone in their right mind, want it to be) but even its most hot-blooded moments of passion or anger feel stilted. Perhaps it’s due to Ouellet overreaching at the glacial Siberian setting (the film is set in deep-freeze January — certainly PTSD-inducing as the film hits theatres right as this endless winter seems to be on its way out) in his direction, or perhaps it’s the way Parr leans so hard on the influence of the Chekhov story that the film becomes entirely too dependant on another work’s emotion to move its own.

There’s something about Gurov and Anna that feels experimental — not in the Stan Brakhage, tape-garbage-to-a-piece-of-film way, but in a way that suggests a film made under very specific limitations for a very specific purpose (think mumblecore or Dogme 95, even though the film has nothing to do with these movements). I don’t know what kind of limitations Ouellet put on himself (maybe he didn’t) but I know that these kinds of films often leave me cold (pun intended). Gurov and Anna is well-made, intelligent, original in its treatment of mothballed tropes and well-acted — but it does nothing for me nonetheless. ■