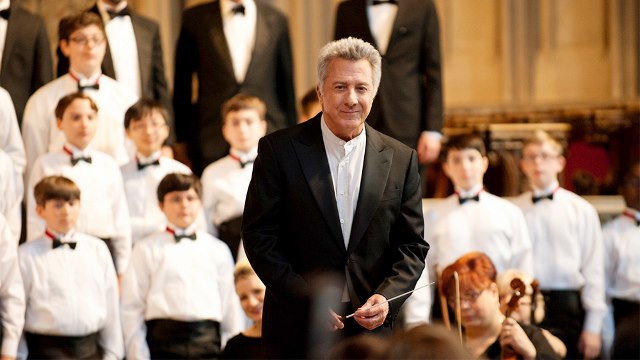 Dustin Hoffman and the boys in Boychoir

It’s been eight years since François Girard directed a film, but that hardly means he’s slacking. The polyvalent artist may have started his career in film (32 Short Films About Glenn Gould, The Red Violin) and video, but he’s since branched out in directing for the stage, operas, television and even put on a couple of shows for an up-and-coming local circus named Cirque du Soleil. Still, it was cinema itself that brought him back to cinema. “I really missed it! I was pretty present in many media in the last 10 or 15 years, but my first love was always cinema,” he explains.

Boychoir is the story of Stet (newcomer Garrett Wareing), an 11-year-old Texan with a rough home life and a tendency to get into trouble at school. His principal (Debra Winger) sees tremendous potential in Stet’s musicality, but Stet refuses to follow her lead until his mother is killed in a tragic car crash. Left in the care of the rich father he never knew (Josh Charles), Stet is sent to the prestigious American Boychoir under the tutelage of Anton Carvelle (Dustin Hoffman). It soon grows obvious to Carvelle, his second-in-command (Eddie Izzard) and the school’s dean (Kathy Bates) that Stet might be the boy they need to finally get to a prestigious competition in New York, but Stet can’t read music and doesn’t have much in common with the privileged kids at the American Boychoir.

“I met with producers about another project that I wasn’t really interested in,” says Girard. “They had the script for Boychoir kicking around, but they hadn’t thought to offer it to me because they thought it was too small. Dustin Hoffman had already expressed interest as well, which was another enticing factor.” When I ask him about the more commercial nature of Boychoir when compared to his other films, Girard corrects me. “I wouldn’t say commercial — I think we’re all trying to make movies that make money. It’s certainly more mainstream than the films I’ve made before, which you could say were more cerebral or concerned with the architecture of the story. I think the best way to put it is that this is a more simple movie, one that lives in emotion and music. It’s what I wanted to communicate, and what I did communicate.”

Girard’s already made a couple of films about music — many would say a couple of the definitive films about music — but this is his first experience directing a chorus on screen. “I’ve always loved choir rehearsals in the opera. My favourite part of the opera is when the choir kicks in — on stage, sure, but especially in rehearsals. There’s such an emotional strength in vocal choirs. It gets me every time. I knew I’d find something like that here,” he explains. “The purity of their voice, but also the purity of their heart — they’re still children, they haven’t really begun their lives yet. There’s something about all that that makes the music even more touching.”

One of the film’s central themes is the ephemeral nature of the gift the boys have; most of them hover around 12 years old, meaning that puberty is just around the corner and that its arrival signals the end of their career as part of the Boychoir. Girard points out that this race against time was one he also had to deal with while making the film. He captures a very specific moment in these boys’ lives in the film — the characters, but also the actors, who aged right out of their roles as the film was finished.

“Joe West, who plays Devon, was able to hit the High D (the highest note a singer of the boys’ range can hit — being able to hit it is a plot point in the film) while we were shooting,” says Girard. “He’s the one that hit the best ones, but when it came time to loop the film, he couldn’t anymore! Between the two — and we’re talking maybe four, five months — his voice changed!”

And as for that ever-enticing proposal of working with Dustin Hoffman? “Dustin has to be one of the most generous, agreeable, available actors, with me, with his fellow actors but especially with Garrett, who he took under his wing,” he says. “Garrett has full responsibility for his performance, but I think there’s some of it he owes to Dustin as well. Dustin really guided him and treated him as an adult. He was truly fantastic.” ■