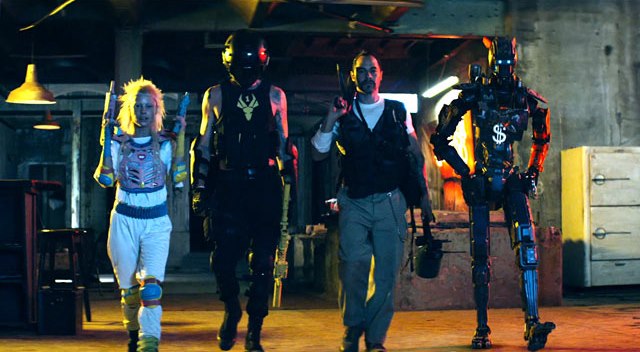 Once upon a time, there was a South African director named Neill Blomkamp who spread weeping nerdgasms throughout the world with District 9, his smart sci-fi debut about alien apartheid in South Africa. As these things go, the powers that be then threw a bunch of money at him so he could make a movie with Matt Damon.  While many danced in glee at the sight of Jodie Foster in space, others struggled to see past, well, Matt Damon and his own personal brand of beige.

So, how does one Sir Blomkamp follow that up? By making a talking robot movie starring rap-rave group Die Antwoord, obviously!

Many will be quick to say that this film barely makes any sense, and of course, most of them will be right, but I’m gonna go ahead and support Blomkamp’s decision to just say, “Fuck it, I’m directing the next Alien, so who cares what I do till’ then!” Amen, brotha!

Since this is a Blomkamp film, Chappie takes place in the not-so-distant future, in Johannesburg, where crime is rampant and everything is a bit shit. A company called Tetra Vaal is supplying the city with “scouts,” robot cops designed by geek whiz Deon (Dev Patel). Ignoring orders from his boss Michelle Bradley (Sigourney Weaver) not to do so, Patel takes a broken model home to test his new Artificial Intelligence program.

Meanwhile, gangsta trio Ninja, Yo-Landi Vi$$er (Die Antwoord playing exaggerated versions of themselves, if possible) and Amerika (Jose Pablo Cantillo) come up with the brilliant plan to kidnap Patel and steal a remote that they imagine turns all robot cops off. Instead, they find Chappie (voiced by Blomkamp’s fave, Sharlto Copley), the first robot with feelings and thoughts, and decide to morph him into their very own gangsta titanium robot.

Oh, also, while all of this is happening, Hugh Jackman has a mini mullet hair cap and is angry because no one wants his own giant robot Moose, so he tries following Patel around out of robot envy. Hilarity ensues!

Let it be known that Die Antwoord do not simply supply a colourful cameo, but are the major driving force of this film — they are Chappie’s “mommy and daddy.” The star power amassed by Blomkamp is tossed aside to make room for all their weirdo alien glory to shine. Weaver seems like an after-thought who’s just there for sci-fi cred or an Alien stamp of approval, Patel weeps too much throughout and Jackman’s villain is barely developed, to the point where him crossing himself to Jesus near the end seems like an action thrown in by the actor to add some meat to the bone.

Blomkamp appears to have struggled between creating an over-the-top silly sci-fi romp where the first intelligent robot created just ends up being a shitty, bling-wearing gangsta who steals Playstations and sticking to his usual “it’s tough being an outsider in the future” spiel. Unsurprisingly, Ninja and Yolandi’s dramatic chops aren’t going to win any awards, no matter how awesome that would be (and not because the Oscars don’t like Africans). If you’re not a fan of their music, this may feel like a really long and intricate music video, or the longest build-up to Enter the Ninja ever conceived, but their part in this film makes this hot mess of a movie incredibly entertaining, hilarious and absurd. Sure, the story resembles Short Circuit, but Short Circuit remixed to the sound of Die Fokken Antwoord.

In short, is this film the innovative follow-up to District 9 you’ve been gagging for? Maybe not, but it’s Blomkamp having a helluva good time before getting locked down to the boring, dreary and disappointing world of Hollywood sequel-making  (sorry Alien fans, but remember Prometheus?).

If you’re looking for serious sci-fi, this is definitely not it, so if you’re against having a good time, I’d recommend staying home and waiting for the next film based on something Philip K. Dick once scribbled on a napkin. ■