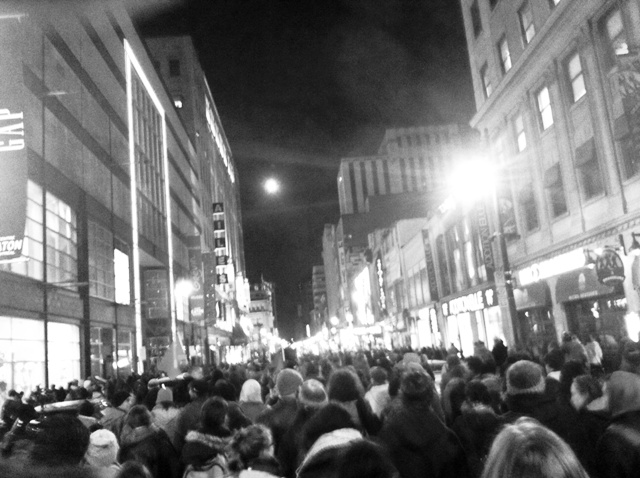 Artists can play a critical role in building the current movement against austerity in Quebec.

Joining the movement is critically important from the vantage point of social justice and solidarity, but also because independent artists are so deeply affected by neo-liberal austerity measures. In real terms, austerity budgets view arts and culture as excess, not as essential to the heartbeat of society.

In the Quebec government’s 2015/’16 budget announced this week, education and culture are grouped together into a single item — neither essential social pillar receives substantial new public funds. A couple of basic equations applied to the budget breakdown concludes clearly that the funds allocated to education and culture don’t even match inflation rates, revealing that both sectors are targeted maliciously in this austerity budget.

Another victim of the budget is health care spending, especially when viewed in tandem with the sustained Conservative moves to undercut any real federal health policy. Underfunding creates the conditions for public-private partnerships to flourish, along with for-profit experimentation, further facilitated by the lack of any federal health care accord.

Generally this budget is shaped by a violent austerity agenda, aiming to balance the books by cutting public funds to many of the most essential elements to our society, at a time when Canada has the lowest corporate tax rates within G7 nations. This budget is building on more than a decade of hardcore austerity in Quebec, compounding the current disaster.

According to documentation from the Institut de recherche et d’informations socio-économiques (IRIS), from 2000-2008 both PQ and Liberal governments took economic policy decisions that denied an estimated $9.8-billion in public revenues, funds denied through tax cuts and deductions largely favouring corporations and the wealthy.

On the positive front there is growing opposition to this disastrous policy framework, a grassroots movement that is energizing Quebec as 2015 turns to spring. Tens of thousands of students are on strike in large numbers, protesting this austerity budget, taking to the streets, while community groups, unions and a multitude of social networks are vigorously building a collective resistance, a social strike against economic policy that stands against the well-being of the majority.

Given the multilayered and renowned art scene in Montreal, this moment of social upheaval and resistance to government-driven injustice calls on us to stand up as artists. From Le Refus global in 1948, to the intensely involved artists of the ’60s and ’70s, from filmmakers like Gilles Groulx, to the poetic texts that often graced the pages of Parti pris, there’s a long history of social engagement extending over generations.

In many ways Montreal’s global recognition as a contemporary mecca for creative music is rooted in this history, which pushed for a society where art isn’t simply shaped by free market forces, but is a process appreciated both for creative beauty and the community-building process involved in alternative artistic practices, that communal interchange of ideas that drives creativity.

As this current movement against austerity builds, let us as artists find ways to contribute, to build on the work and participation of so many artists already joining in. In musical tones, with street art, through community benefits, let us all activity explore ways to ensure that the inspiring creative spirit this city supports can give back by nourishing the brave movement against austerity and for social justice that’s currently taking to the streets. ■