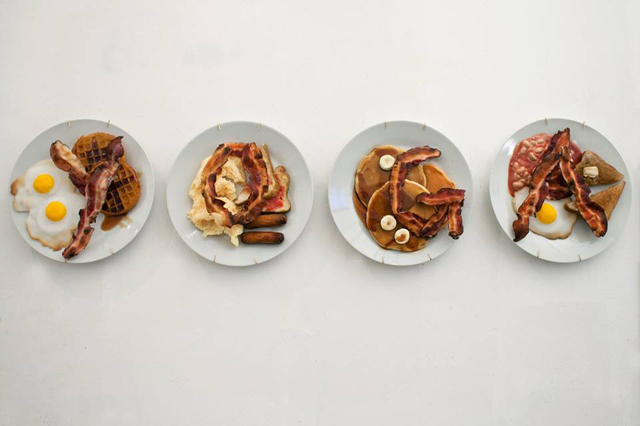 This week offers plenty of opportunities to check out some artworks as well as a number of conferences and performances. While you’re out, you can have a little extra fun with hashtags if you participate in Twitter’s #MuseumWeek endeavor, running until March 29. Every day there’s a different theme and participating galleries will be sharing some special images and encouraging guests to share their own as well. Probably without the use of a selfie-stick though. Participating galleries in Montreal include the Montreal Museum of Fine Arts, the MAC, DHC/ART, the Montreal Archives and the Redpath Museum.

Now for some art shows. Tonight, Wednesday, head to Parisian Laundry for the vernissage of photographs by Montreal brothers Carlos and Jason Sanchez. The seven large scale photographs in the exhibit are one part art and one part photojournalism as the images capture moments of action that tugs at the viewer to want to find out more about the story. 3550 St-Antoine W., Wednesday, March 25, 6–9 p.m.

Thursday offers plenty to do including a special event at the Phi Centre with curator Cheryl Sim digging into the current exhibition exploring the work of Theresa Hak Kyung Cha. 407 St-Pierre, Thursday, March 26, 7 p.m.

You could also head to Diagonale Thursday for the opening of Pelt (Bestiary) by Ingrid Bachmann. The exhibit involves interactive sculptures that breathes some animalistic life into the ultra-clean electronic realm. The forms, resembling sleeping furry animals, move and respond to viewers in a variety of ways, assisted by robotic engineering. 5455 de Gaspé, #110, Thursday, March 26, 5 p.m.

Friday is another busy day. The Musée d’art contemporain de Montréal (MAC) begins a two-day symosium to complement their current Simon Starling exhibition (note that the artist is also one of the guest speakers for the conference). Check the link for full details about the program for Every Object Has a Story: Art, Research and the Reinvention of Things. 185 Ste-Catherine W., Friday, March 27 to Saturday, March 28, $20, or $10 for students and MACarte holders.

Another Friday study happens at Artexte and will examine the writings of Edward Said whose influential writings including his book Orientalism are still important as we think about the effects of colonialism, imperialism, and assigning otherness. This examination coincides with the Orientalism exhibition currently on display at the Montreal Museum of Fine Arts. Drop in anytime for as long or short a time as you like for the marathon reading session. 2 Ste-Catherine E., #301, Friday, March 27, 12–9 p.m.

If rock ‘n roll is more your style, head to Death of Vinyl Friday for a vernissage with some intensely patterned decorated guitars and works on canvas created by the prolific John Lanthier, who’s coined the term Hyperdoodling to describe his psychadelic style. 6307 St-Laurent, Friday, March 27, 5–9 p.m.

You could also check out Sugar Bear, with a Friday vernissage at Galerie D by Tatsu and Danielle Bédard happening in conjunction with the gay village’s Sugar Bear Weekend. DJ Ron Hamelin will be on hand to spin some tunes. 1200 Amherst, #102, Friday, March 27, 5–10 p.m.

Two shows open Saturday at the Belgo’s Joyce Yahouda Gallery, including Banque du Canada, the first Quebec exhibition by Congolese-French artist Moridja Kitenge Banza. In the works, Banza has redesigned our familiar Canadian currency to highlight some important gaps in the country’s collective memory about the development of our Canadian identity. 372 Ste-Catherine W., #516, Friday, March 28, 4–6 p.m.

Continuing with the education and discussion theme of many of this week’s events, the SBC Gallery of Contemporary Art is hosting a Saturday conference as part of its Talk Show lineup, with this weekend’s talk centered around Brian Massumi’s book, The Power at the End of the Economy with guests from the collective Les Entrepreneurs du Commun, established to critique the federal government’s plan to create a monument to victims of communism in Ottawa. 372 Ste-Catherine W., #507, Saturday, March 28, 3 p.m.

If you missed last week’s vernissage for Zoé Duchesne’s Poupée at Arsenal Montreal, you’ll have another chance to see her perform as part of the exhibition, on Sunday afternoon. 2020 William, Sunday, March 29, 3 p.m.

These are just a few highlights, so be sure to check out the full listings below!

In the Realm of Others – Ed Pien

Abstract Art: It’s Nice, But What Is It? – Group Show

Saints of Soul : Beauty Through Hardship – Miss Me

Everything is Going Swimmingly – Nicolas Fleming

Through the Scapes of Your Memory – Andréanne Godin

Near You No Cold: Part 1 – Raymonde April

24 hours in the life of a Swiss cuckoo clock

19,277 cases of COVID-19 / Coronavirus have been reported across Canada according to the Public Health Agency of Canada.

There are 4,775 known cases of COVID-19 in the city right now. Here’s how they break down by borough.