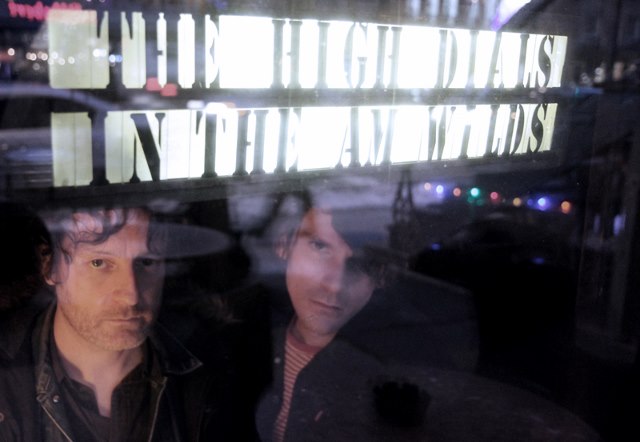 There was a time when the High Dials thought they were done. Not that they’d stop making music, but that the rotating line-up and sonic tangents they were chasing since their last LP (Anthems for Doomed Youth, 2010) — shoegaze, power pop, dream pop — were leading them too far astray to retain the name they’ve had since 2003.

Over the past year and change, with the release of the Yestergraves and Desert Tribe EPs and the making of their new LP, In the A.M. Wilds, that identity crisis dissolved. Members of the band’s large extended family, including keyboardist/singer Eric Dougherty and drummer George Donoso III, contributed during development and recording, and the core creative duo, singer/guitarist/chief songwriter Trevor Anderson and guitarist Robbie MacArthur, wrote together for the first time.

“We were very creatively restless and wanting to push ourselves,” Anderson says. “We were looking for a different approach to our music, talking to different people about producing the record, and surprisingly ended up really connecting with Marc Bell, the guy who runs Troublemakers Studio. I say surprising because they haven’t done a lot of rock projects, and we’re definitely a rock band. Marc’s much more schooled in hip hop, soul, world beat and electronic music.” The producer’s influence paired well with the record’s lyrical themes, inspired by Anderson’s work as DJ Tinsoliderman — at one point he was DJing five nights a week at bars like Bily Kun, l’Escogriffe and Blizzarts.

“Being a DJ kinda makes you a voyeur, observing nightlife. You’re a part of it, ’cause you’re generating it with the music, but you’re apart from it, so you have this detachment. And with all the substances you’re taking and everything, basically I would just find my mind was wandering all the time. I would get these ideas and I was constantly writing lyrics in my phone. And then sonically, too, those beats — I feel like the record is a little bit dancier.

“There are really upbeat, almost anxiety-driven songs like ‘Afterparty,’ which conjures up that state of mind: ‘Let’s keep the party going’ at 3 a.m. But there’s this dark undertone to that where it’s just fear, like I don’t wanna go home, or I can’t face up to this or that, and I have to keep going. It’s the ecstasy and the agony of nightlife — depending on your personality, you can be very sensitive to that and pick up on things. I find that that time of day, midnight to 6 a.m., it’s like a distortion of reality; people behave differently and people feel differently, and obviously you’re in the darkness.”

Though the record is a little heavier on groove and lighter on guitars and drums, In the A.M. Wilds is hardly a club record, or a chillout record. The band’s foundation in classic pop remains, with echoes of the Smiths and New Order kicking up its timeless appeal. “It’s not like guitars are disappearing or anything like that. It’s not like rock ’n’ roll is dying — it’s just regenerating all the time,” Anderson says. “At this point, a band that’s been around as long as we have, it’s not like we’re ever gonna totally reinvent ourselves. We’re always just taking a little bit and continuing in our own world. I just feel like there are influences of things that are happening right now, definitely. And yeah, it still feels very much like the High Dials.” ■