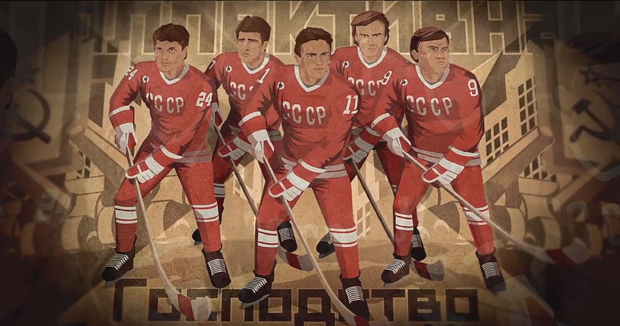 I never thought that a documentary about hockey could interest me in the least. I was never a fan of a game that involves a group of big guys in ridiculous suits chasing a tiny puck while occasionally (read: often) shoving each other. But as director Gabe Polsky shows us, the game wasn’t always played that way. His documentary Red Army, which premiered out of competition at Cannes last year to ecstatic reviews before playing TIFF to an equally rapturous reception, tells the story of the first Soviet hockey team.

The movie’s appeal comes in learning about the politics of the game, if only because everything we were ever taught about the importance of sports — how they erase borders between countries, or how they lift up the human spirit — comes under question.

The documentary’s central voice is that of former player Slava Fetisov — the current sports minister of Russia, he still very much commands the respect and admiration of a hockey legend. Though irritable at first (watch Fetisov flip off Polsky in the first minutes of their interview), his narrative is the backbone of the film.

In the Soviet Union, boys were handpicked for the hockey team when they were as young as eight years of age. Few families could afford to buy hockey gear for their children, so sending the little ones to the tryouts usually involved a couple of years of saving money.

The team’s first coach, Anatoli Tarasov, trained the Red Army kids from 1946 to 1972, so he quite literally created the Russian hockey style of play that made them a force to be reckoned with. Inspired by chess players and even Russian folk dance, Tarasov’s style of play involved an intricate passing of the puck between the players. In 1972, when his team won their third gold medal at the Olympics, Tarasov was fired because he pulled his team off the ice during a disagreement with the referee. The incident made the Soviets look bad.

When Polsky asks Fetisov, “How did Viktor Tikhonov become coach of Red Army?” you can see the colour disappear from his face. This is when the documentary becomes even more interesting, and when the question of politics and propaganda become most evident in the sport.

Known for his dictatorial tactics, Tikhnov would keep his players in hockey camp anywhere from 10 to 11 months a year, only giving them a day off every six weeks or so. He didn’t allow the players to see their families, even when one player wanted to visit his dying father. Many of the players were pushed to defect and leave the USSR due to their tough conditions. “Why do I play for the man that doesn’t respect me?” Fetisov asked himself.

Ultimately, Red Army is a story about the Cold War. What becomes clear is that the Russians used sport as a form of warfare. They wanted to prove to the world that the Soviet system worked through their greatness. They wouldn’t let their athletes leave the country and many obstacles and precautions were taken so that they wouldn’t defect to the States.

It wasn’t until 1989 that amazing players like Fetisov, Vladimir Krutov, Igor Larionov and Sergei Makarov were finally able to play for the NHL. Their welcome wasn’t a warm one until they started winning some games — they were initially seen as commies trying to take over America. But beneath the dirty politics that managed the game was the true ingenuity of the players, and the tightened bond of their friendship. The film is stylish and it doesn’t try to spoon-feed us its agenda. It’s fast-paced and fun, just like the game itself. ■