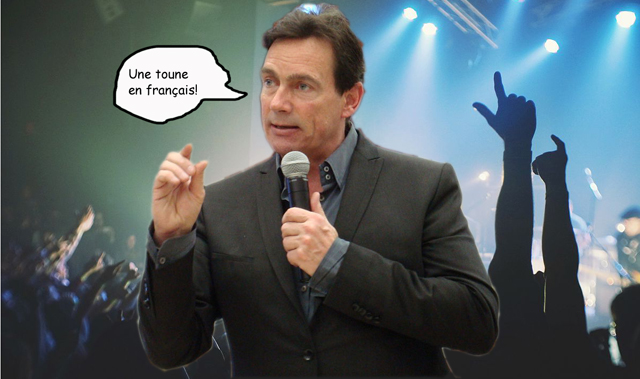 When Pierre Karl Péladeau took a vicious face plant while riding his bike on Mount Orford last May, breaking eight bones just eight days before he was due to enter the National Assembly as first-time sitting MNA, you have to wonder whether he might have scrambled his brains a little as well.

That’s the most charitable explanation you can come up with for PKP’s bizarre behaviour late last month while attending an intimate concert at the Emerging Music Festival in Rouyn-Noranda. In a room that was a little bigger than most Montreal Maisons de la culture, the Parti Québécois leadership hopeful heckled Montreal indie pop band Groenland, yelling: “En français! Une toune en français!” (video here).

Groenland singer Sabrina Halde, who was chatting with the small crowd in pretty fluent French between songs, had no idea at the time who the heckler was but joked he might be attending the wrong show. In fact, the group had been nominated at the 2014 ADISQ music awards for “Show of the Year – Other languages.” So if Péladeau or his handlers had bothered to do the slightest bit of research on the concert he was attending, he might have realized that “other languages” means languages other than French.

Questioned about it by La Presse last weekend, Péladeau dismissed the incident as a smear attempt by the newspaper, before adding “I have always been for the French language, I have always defended Quebec artists.”

He didn’t explain how, exactly, he was defending Quebec artists by heckling them to sing in French, but I can’t wait to see him defend Céline Dion the next time he attends one of her concerts. Maybe she can sing La puissance de l’amour or Mon coeur va continuer à battre.

Even Péladeau’s defenders tacitly acknowledged the inappropriate behaviour when they explained that it had been a long day, and by 11 p.m. PKP was “fatigué” — which means “not drunk, though we can’t blame you for thinking that.”

It would be easier, however, to explain away the gesture if Péladeau had admitted to consuming a few too many cognacs or swallowing a couple extra pain pills for all those broken bones. Because, really, who else engages in that kind of boorish behaviour other than lushes and lunatics? This is an intimate concert venue in small town Quebec, not a political cock fight in the Salon Bleu.

The appropriate follow-up from Péladeau, the graceful response, should have been an apology to Groenland and to the main organizer of the festival — a prominent PQ organizer — which had invited several Quebec anglo artists to perform, including all three acts in that opening night’s performance.

Péladeau, it is often explained, is “not a politician.” Usually, not-a-politician is considered a good thing to be (or not to be?), functioning as code for “not a sleazy liar.” In this case, however, it means someone who is extremely maladroit in his dealings with people: no doubt a hangover from his tenure as head of the powerful Quebecor media empire, where he dealt almost exclusively with either sycophants or unions/competitors he wanted to bust.

PKP is not faring well in the political world, where inciting fear is rarely effective as a long term recruitment tactic. People have to actually like you, and to like your ideas, if you want to expect any longevity. So far, however, Péladeau’s leadership campaign has lacked originality and inspiration as he tries to keep his head down on the long march to the May 13-15 vote.

I hate to interrupt him in mid-campaign, but if I could shout out a few words of bilingual advice, this is what I’d say:

There have been 127,142 known infections of COVID-19 in the city. Here’s how that number breaks down by borough.