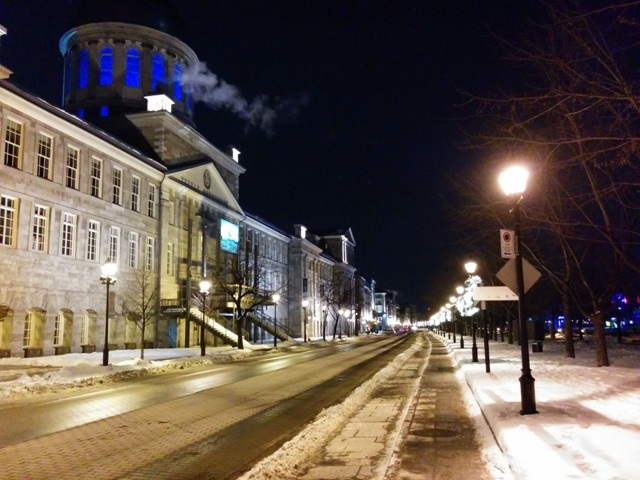 Environment Canada has confirmed what fed up Montrealers already knew: 2015 so far has been a little colder than normal. They also said to expect another two weeks of harsh cold before temperatures creep back up to livable levels.

Upon learning that we would be subjected to another frozen fortnight, I tapped out. Even on Jan. 10, when the Weather Network reported that it was colder in our neck of the woods (and much of Canada and the northern States) than the Gale Crater on the planet Mars, I was optimistic. Not anymore.

After hockey, complaining about the weather is Montreal’s second sport, and the current winter doldrums are the animus-stoking equivalent of a Gomez goalless drought. The numbers are favourable if you’re looking to justify your lethargy, although perhaps not as decisively as one would think. The average temperatures are only about a tick below par, but there are two factoids that really sticks out: we had 28 days of -10 or lower in January, and so far it’s been the coldest February in 20 years. That’s an unrelenting, Ripken-like streak of cold. It probably explains why this winter feels particularly lousy.

Everyone I know has some sort of cold or flu-like symptoms, as if our bodies are raising the white flags for us. Plans for nights on the town often crumble as soon as the sun sets and nightly lows are hit. It’s so cold, complaining about snow clearing has become an afterthought. It’s too cold to even care about politics. I could’ve been at that fateful Groenland concert in Rouyn-Noranda, perhaps right alongside a heckling PKP, but the thought of an eight-hour car ride north in these conditions dissuaded me from taking the trip. I usually live for embarrassing public spectacles such as that one, but even in hindsight I couldn’t be arsed.

On Valentine’s Day, the one day where social protocol requires one go out and make an effort, there was a flurry of last-minute reservation cancellations and no-shows at a number of Montreal restaurants. The no-show thing was something of an epidemic in this town already, but barring unforeseen relationship issues, the Valentine’s Day reservation is one you’d think would be respected. But no. When it hit a low of -21, pajamas, the couch and Netflix probably seemed romantic enough.

The cold thwarted what was supposed to be the crown jewel of this year’s Igloofest line-up — a triumphant hometown return for Tiga on Super Bowl night. Blame it partially on the football or the Sunday schedule switch, but there should have been way more than the few hundred who turned up to get turnt with the “Bugatti” hitmaker. Again, once temperatures dipped below -20, it became evident why the Old Port was a ghost town walking up. My poor colleague in the VIP even froze his fingertips during the soirée, possibly because he was clutching his complementary Sapporo can with thin gloves. Incredibly, small ice pellets formed in our beers as we were drinking them. Now that’s cold.

When I say I’ve given up against this year’s winter, it’s only a symbolic defeat, because I can’t hide till spring. I still have to go outside for work and errand-running purposes, but the joie de vivre is in hibernation. Montrealers take pride in being able to power through our winters, and to skate, ski and play while doing it. But we’re used to hunkering down when it’s especially cold with the promise of an eventual reprieve — some -2’s to go along with the -20’s. Not this year, though, when the bitter cold has been so consistent, Mars is starting to sound like a toasty alternative. ■