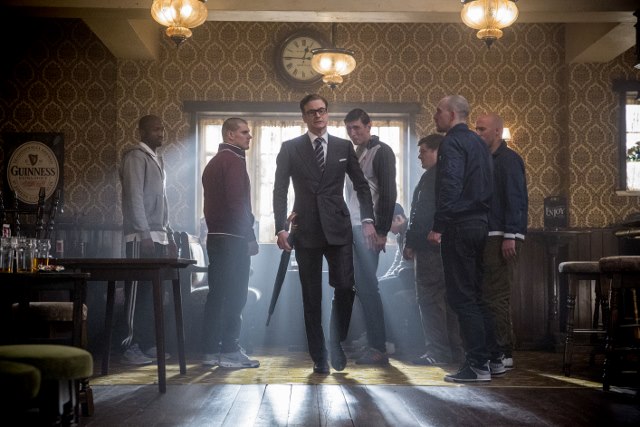 The movies have been good to comic artist Mark Millar. Three of his works (Wanted, Kick-Ass and now this) have been adapted into major potential franchises (though only Kick-Ass warranted a sequel) despite the fact that they essentially play as minute variations on each other: young man (possibly poor and/or emasculated) finds heretofore unknown powers (sometimes supernatural) within himself, becomes an ass-kicker thanks to a father figure played by an A-list star of some sort, saves the world from certain doom, gets laid, peels off into the sunset.

Millar can be puerile and immature, but he’s found at least one fan in director Matthew Vaughn. Kingsman: The Secret Service is Millar’s riff on the preposterousness of the Bond franchise, given a bit of 2014 spit and polish thanks to Vaughn’s hyper-kinetic style. It’s more than a little stupid, but it also sands down the most prickly and unlikeable aspects of Millar’s work (the misogyny, the manufactured edginess) into an undeniably entertaining film.

Behind the facade of a fancy bespoke tailor on Savile Row in London operates an extremely secretive spy agency. Led by Arthur (Michael Caine), the Kingsmen operate independently of any government, speak proper Queen’s English and wear rad suits in their travels fighting bad guys across the globe.

When one of their men is killed in an operation to save a kidnapped professor (Mark Hamill) who specializes in global warming, the Kingsmen are tasked with finding a new recruit. Harry Hart (Colin Firth) brings Eggsy (Taron Egerton), a late Kingsman’s son turned petty thief and delinquent, into the mix. The training to become a Kingsman is rigorous, but Eggsy stands above the pack, which comes in mighty handy when the tech billionaire (Samuel L. Jackson) behind the kidnapping unveils his nefarious plans to counter global-warming (hint: it’s not exactly green).

Kingsman pastiches the Bond series (and more precisely the more outlandish, Moore-led Bonds of the ’70s) with glee, packing on the absurd tropes with juvenile delight. Jackson is a particularly ridiculous villain, a megalomaniacal nutbag who can’t stand the sight of blood and affects a lisp and a wardrobe somewhere between vintage-era Nelly and a colourblind octogenarian. His henchman is a beautiful young woman with swords for feet (!) and his plan to take over the world is so patently ridiculous that it could well come verbatim from a nine-year-old playing with GI Joes.

Likewise, the Kingsmen have a plethora of gadgets that include oxfords with retractable blades, pinky rings that electrocute and bullet-proof double-breasted suits. (Part of the fun is watching the always-dignified Frith being decidedly Firthian while also backflipping off balconies and cracking thugs over the head with beer bottles.) It’s the stuff of adolescent fantasy given exactly the appropriate amount of gravitas: almost none.

Vaughn’s style tends to verge on the bombastic — his aesthetic could charitably be described as “ultra-violent Honda commercial.” This gives Kingsman its most memorable moments, notably a scene in which Firth graphically lays waste to an entire church congregation to the strains of Skynyrd’s “Freebird” (it’s kind of a long story). Vaughn understands the inherent limitations of the material and milks them for all they’re worth, but his general style is gimmicky and coldly impersonal. Kingsman lacks literal grit — it feels overly polished, where even its outbursts of violence and gore feel like they colour within the lines. As entertaining as Kingsman is, it boggles the mind to imagine a version that wasn’t so determined to look and feel like it would also offer you 0 per cent financing and three screens’ worth of small print.

There’s enough weird, off-the-wall shit in Kingsman to make it worthwhile, even with its slick car commercial style and bloated running time — there is no reason that a goofy spy action comedy should clock in at 130 minutes. So much of its appeal lies in daring to take the most obviously bonkers turn every step of the way. Besides a few cringeworthy moments of meta reflexiveness (it’s the kind of movie where characters actually say “This ain’t that kind of movie”), it has very little to say about the spy genre, international espionage, global warming, international relations or gender roles, but it has a lot to show us. Colin Firth impaling an old lady gone berserk with an umbrella is one of those things. I’ll take it — not too often, but I’ll take it. ■