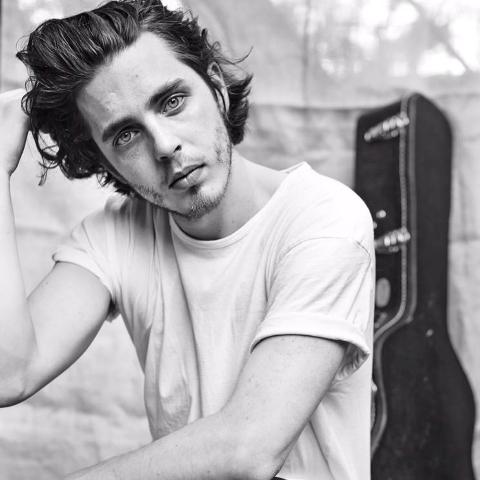 “The paintbrush needs to be held tight. Every line must be the result of a confident stroke,” she explained, pointing at a thick, dark beam on the canvas. “That’s it really,” she insisted, “every stroke must be assumé, self-confident. I think that’s the most important thing in painting.”

Or in art in general, really. With her explanatory statement, my painter friend put her finger on something that’s a lot more universal than she thinks. Whether we’re talking about painting, poetry or music, it’s true that any artistic endeavour that’s not solidly grounded in confidence is bound to reach a certain limit in quality. Far from the formulaic, formatted works of art, there lies a kind of creation that comes unfiltered from the artist’s very core, in sincere, authentic fashion. That genuineness can only be born out of self-confidence.

As it happens, self-confidence is something that Jesse Stone doesn’t seem to lack. I mean, the man moved to Manhattan from his native Montreal, got married and recorded Break of Day – his debut album – all in the space of a few months. If any doubt permeated his bold, forward-moving mindset, he hid his game well.

The record itself may very well be used as proof of his overall fearlessness in the face of challenges. Break of Day is miles away from the overproduced, overpolished folk records that today’s acts often forge with the help of gear-loving mixing engineers. The essence of its quality lies in its raw ingredients, the very ones that all great singer-songwriters obsess over when crafting folk classics.

No wonder, because it’s a safe bet that Stone grew up enjoying his fair share of guitar-strumming poets. When listening to all 10 songs on his record, it’s easy to get the impression that their author’s most ardent desire was to match well-crafted riffs and grooves with sharp, witty words and images. Indeed, although the album covers quite a bit of mileage on Stone’s musical map – from upbeat folk-flavoured rock songs to ballads coloured with a country twang – the careful attention to lyrics remains constant.

And I mean that. If the content of some pieces is likely to be grasped in about the same way by most listeners, the majority of them are stuffed with nuances and subtleties, and as such tend to induce true reflection.

In “Don’t Change,” one of the most spirited tracks on the record, a crazy-sounding street-dwelling activist is summoned not to change — but by whom? The quieter “Promises” speaks of sorrow, of regretting something — but what precisely? As for “Fisherman,” a whole-hearted roots song with a hasty pace, I gather that it’s an allegory about being pulled too deep into something, but I have yet to decide what that is. And that’s just it: that ability to write verses that are relatable but don’t offer any real certainty (triggering absorbed cogitation instead) is one skill that most songwriters lack, but that Stone undoubtedly possesses.

Perhaps it’s that nuanced approach to songwriting that attracted all the gifted musicians who are featured on this debut effort. One has to wonder: the drums are handled by Sam Roberts Band’s Josh Trager and the trumpet is played by David Carbonneau, who worked with Patrick Watson on his latest record. Notre Dame de Grass’s Josh Zubot and Guy Donis take care of fiddle and banjo respectively, while First You Get the Sugar’s Alex Silver sings along with Stone to back him up throughout the record. Of course, the fact that the whole was mixed by Dave Sturton, a renowned local engineer who worked with Jean Leloup and Bran Van 3000’s James Di Salvio, does not hurt either.

And so, when you hear Stone sing that he “blew his chances on a 10-hole harp,” don’t believe him for a second. His well-rounded offering is layered with a variety of moods, filled with heaps of lyrical goodness and, above all, it’s overflowing with that above-mentioned unalterable self-confidence. Completely assumé. Such quality songs, when delivered with such poised boldness, are quick to become eloquence. And in this case, they do.

In our time marked by hefty cocktails of post-production techniques and computerized music creation, you might ask yourself whether good singer-songwriters are still a thing. Rest assured. Jess Stone’s Break of Day is proof that they’re still out there. They still roam.

Antoine Leclerc: I understand that you’re a prolific songwriter, but your record only has 10 tracks on it — why is that, and why these 10?

Jesse Stone: When it was time to make the record, I actually brought a lot of songs to the table, but I really wanted to focus on specifics: structures, different sounds, experimenting with different instruments. I also realized that we were on a budget and that having a concise 10-song album makes it easy to encapsulate themes, styles, flow, to get a point across. If there had been any more, there was risk of a flood.

AL: The meaning of your songs isn’t really evident; your writing style is in a way very subtle. Do you purposely leave room for interpretation in your lyrics?

AL: There’s definitely a country twang to your music. Where does that influence come from?

JS: It generally comes from the Canadian records that I listen to, that my dad listened to, and that became my favourite records. I listened to my dad’s music, my uncle’s music. I didn’t listen to the radio, I didn’t have the same tastes as my friends… Blue Rodeo, Crash Test Dummies, Neil Young… Neil Young was a huge influence. My favourite record of his growing up was Harvest Moon, which is a roots record, a country folk record. So that’s always been inside me. I wanted to write campfire songs. That’s what I started with, anyway.

AL: There are two songs on the album that feature a horn section, which I understand is a first for you. Tell us about that new experience.

JS: We were scared. We were SCARED of the horn section. We were nervous — frightened! But they showed up and played their parts, and I was… amazed. I didn’t realize you could mould a horn section the way you can mould a guitarist, or how adaptable they were, especially when they’re as professional as these guys: Dave Carbonneau, Cameron Walis. I was able to say, “Okay, instead of pa-da-DA, go pad-da-DOU,” and they did it, they responded, in unison! Once I realized that I could communicate with them, that they were blowing up brass but they had human ears, then all of a sudden it turned into a playground.

AL: I heard about a special EP project surrounding your launch.

JS: Our mixing engineer Dave Sturton and I had an idea to record and film the rehearsal sessions for the album launch that’s coming up, in the studio. We’re going to be recording throughout the show too. We’ll see what we get. If we have a little bit of luck on our side, along with the skilled players that we have, we might able to have something, to put something out in the near future.

AL: What made you choose Po Lazarus as your opening act for the launch?

JS: I always knew I wanted to play with them for my launch — they’re my favourite band in Montreal. They’re out of this world, and they’ve been doing really well lately, since I left. They’ve really picked up some steam. I’ve known them since we were young musicians. I was witness to their first couple of times on stage at my open mic at Bull Pub; that’s where we became friends. In everything I’ve ever done musically, I’ve always tried to keep them involved. Hot Soupe, and the small Saturday night acoustic shows that I put together — they were always featured, they were always there. It’s quite a privilege to have the opportunity to celebrate with them. ■