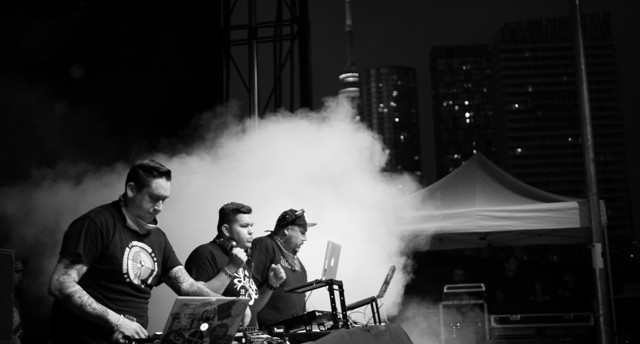 A Tribe Called Red spent a week in Montreal in January, and will return to an Old Montreal studio this month to continue work on their next record. The Ottawa producer/DJ crew are keeping their guest list of singers and rappers quiet, but past collaborations with the likes of Das Racist and Angel Haze might provide clues—or not. One thing that has become clear is that the next record, due this spring or summer on Pirate’s Blend, won’t be all club.

“It’s not necessarily electronic anymore,” says Ian Campeau (aka DJ NDN), “or at least it’s not as much dance music — there’s a lot more to it than a club thing. We’re working with really exciting rappers and singers, and when you add lyrics — some of the lyrics are emotional, some are just fun party lyrics — it brings in a whole different element.”

ATCR have made the different element their specialty since emerging in 2011. Since the dawn of their Electric Pow Wow parties, featuring aboriginal dancers and other elements of their cultures, through the release of their two albums, A Tribe Called Red and Nation II Nation, the group has been lauded internationally for incorporating traditional First Nations music into their party sound, and for bringing contemporary culture and social consciousness to native youth in Canada and beyond. As a side effect of blazing such trails, they’ve become role models and cultural ambassadors.

“It was bestowed upon us, and we struggled with it for a long time,” Campeau says. “I’m Ojibwe and the other two guys, one’s Mohawk and one’s Cayuga, but they’re both Iroquois, so our languages are as different as English and Chinese.

“There are over 700 different nations across North America, completely different cultures, and I think it’s that that [native communities] are embracing  about us, that we’re able to express that diversity within our group. Because we have a platform where we’re able to inform people of that, at least, we became a little more comfortable.”

Having met with indigenous groups in Canada, the U.S., Mexico, Australia and even Sweden, Campeau & co. have witnessed the unfortunate commonalities that colonialism created between native cultures worldwide.

“Colonization has a formula, and we’ve all gone through the same process. We have good friends in Sweden, the Wasami, and right now they’re protesting pipelines going through their traditional territory — they’re reindeer herders and it’s going to cut off their migration path. So these experiences are shared.”

“When we go to Scotland or England or France, that’s where we take on more of an ambassador role. The idea of being First Nations over there is not what it really is. We’re there to show that I’m still First Nations even though I don’t have long hair — I wear a baseball cap and sneakers. We’re able to shatter these stereotypes, and bring up debates.”

One such achievement occurred with 100 anthropology students at the University of Edinburgh.

“I asked if they knew the stereotype of the drunken Indian, and of course everyone raised their hand,” says Campeau (who also noted that ATCR never drink). “Then I asked if they had heard about residential schools, and only four or five people raised their hands. We were able to discuss the generational trauma that resulted from these residential schools, and not only confront these stereotypes — we’re the first to admit there’s an alcohol problem within our community — but also the reason it’s there. It seems like, especially in academia, it’s opening up a lot of perceptions about what it means to be indigenous in Canada.” ■