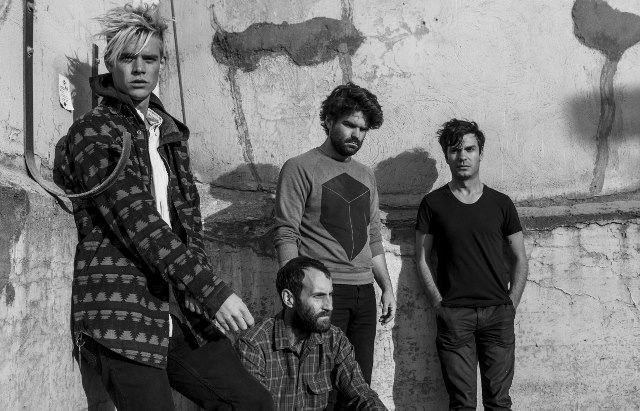 If Matt Flegel seems a little subdued about the recent hype surrounding his band, Viet Cong, it’s because he’s been through the ringer before.

The bassist and vocalist used to hold the same position for another highly regarded Calgary band, Women. An onstage implosion in 2010 led to their demise, but Flegel and drummer Mike Wallace are getting a second kick at the can with this latest project, which also includes Daniel Christiansen and teenage friend (and fellow Chad Van Gaalen bandmate) Monty Munro.

“We’re well-seasoned road dogs,” said Flegel from B.C., not long before they embarked on their current North American tour, which stops in Montreal this Friday. “The last band ended in a weird way and I know something similar isn’t going to happen with this group of people. We take very good care of each other. I feel we’ve learned from being in past bands, and you learn to know the warning signs when shit’s about to hit the fan with someone.”

Flegel’s confidence surrounding Viet Cong will likely be reassuring to Women fans still smarting from their abrupt dissolution. The group’s output thus far, which includes a somewhat cheery basement recording on cassette tape and a more professional debut LP (given an extra layer of sheen thanks to better recording digs and a bag of weed — both courtesy of Blue Rodeo legend Greg Keelor), will also sound familiar to those aforementioned fans as well. There are also hints of Wolf Parade in Flegel’s Krugian vocals and Interpol in the guitars and overall dourness.

Come to think of it, Viet Cong’s guitars sound a bit like Women’s, which is strange because only the rhythm section is present in both bands.

“I guess they both have similar brittle, high-end, piercing guitar sounds, and that’s what I love,” Flegel observes. “The music I listen to and that we drew from has that kind of guitar sound. I don’t know if it was intentional (that there are similarities). I think it might be a Calgary thing. It’s how people play there.”

There’s already been a fair amount of change in the band’s sound from the initial cassette to the seven-track eponymous album, which came out earlier this month. They’ve become bleaker by removing some of the chintzy keyboards and pursuing darker lyrical themes.

“We ditched the pop songs in favour of sprawling industrial things,” Flegel says, adding that it could be an unintentional tribute to his and Munro’s musical origins. When they first crossed paths in their teen years, Munro was in an instrumental band, while Flegel was a full-blown prog rocker.

“I think (those parts of us) are still there. A lot of Viet Cong songs are three or four ideas mashed into one song, which is the definition of progressive in my mind. I feel with the four of us jamming, that’s where these long, sprawling things come together. Maybe it’s me subconsciously living out my childhood King Crimson fantasies.” ■