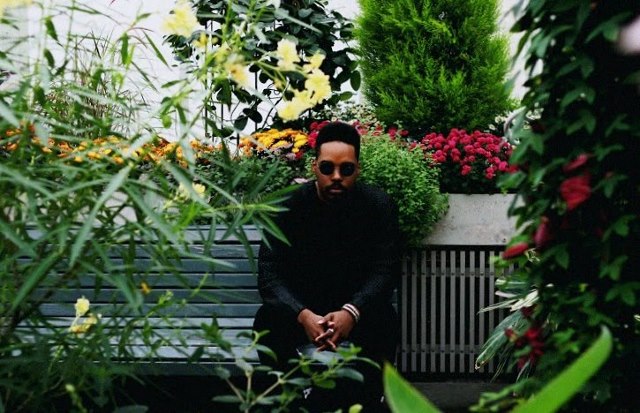 A graphic designer by trade (he designs all of his own cover art), he begins a new day job Monday morning. But first he’ll open up the main stage at Igloofest this Sunday as Osheaga pairs the upcomer with TO crowd favorites Keys N Krates and Montreal electronic music forefather Tiga.

I caught up with J.u.D. this past Wednesday by phone to pick his brain about the sensibilities displayed on his latest, an authentic sleeper hit.

Darcy MacDonald: Your EP is titled St. Flower, a spin on your given name. What sparked that creative decision?

J.u.D.: It was mostly that the first name I had didn’t fit well with the songs on the album. I had a title and I had the cover, but when I was finished production I thought it was a bit too chill, very wavy and dreamy. So I scratched the name I had and went with something a lot more spiritual. I decided to invent a new saint.

DM: I read you wanted to move toward a cinematic approach. People call it “dreamy” but as the EP progresses it almost becomes paced like a soundtrack to a story. But it’s hard not to become reptitive with that pace. How did you arrange these seven tracks?

J.u.D.: At first my goal was to have 10 songs, each at around four minutes. I realized that I wouldn’t be able to finish some, and in some cases that they just wouldn’t fit the mood of the rest. After that, I just put the songs that made it on iTunes, hit shuffle, and listened until I heard an order that worked for me. I knew I wanted to finish with “Magdala” and begin with “Iris.” I changed the pitch on certain tracks to get them to fit more closely. I’ve always wanted to make film music so it was a way to get my foot in the door.

DM: The sensibility of mixing a house element with the cinematic vibe you created, and the trap influence — how did you contain that?

J.u.D.: I think it’s all in the rhythm and the emotion. I also noticed at some point that what I was making was quite sad, in quotes. I didn’t want to break that vibe. And I wanted to tell a story. I really want the listener to be able to have a voyage with this album, and bring you to a place.

It was also a major goal to have live instruments on the album, like the live guitar. And I don’t play the guitar, so that was a challege. So it really became a question of directing the project in that sense, where I had to be able to guide the players, be it strings or vocals, on how to play it, while not actually being able to do it myself. It was a challenge to compose that way.

DM: You nailed it. What other live aspects are on there?

J.u.D.: Well, there are drums, but I did that all on a computer. I contacted a guy to do it live, but it didn’t work out. I couldn’t get the sound I wanted and he was kind of young and wanting to show off a bit. (laughs)

DM: I was wondering, actually, if some of the drums were live. Do you have any experience with a kit?

J.u.D.: Not really — a little, but I’m not a drummer. My live rhythm is really different. What I did though was take sampled drum breaks and programmed more drums on top of those. Otherwise it would have been too simplistic, too squared.

DM: I really appreciate how subtly you bring in all these elements you borrow from. I can tell you have a real understanding of all the genres you are experimenting with.

J.u.D.:  Well, I think it’s that I really listen to a lot of different genres of music, but also I go through phases. St.Flower was made during a phase where I was listening to a ton of house, and a ton of trap, and nothing but, all the time. Now I’m more shifted to house and more electronic. So the result there is a mix what is influencing me immediately around me and what my own goals are.

DM: You have an interesting way of doing that, of bringing influences in and out without trying to hammer the listener over the head with it.

J.u.D.: I noticed that by doing DJ sets I learned more about to make a musical transition between genres and styles. I think that has really informed my career as a beat maker.

DM: When did you start spinning?

DM: So Sunday is a big one, playing with Tiga! How you feelin’?

J.u.D.: I’m so excited. As soon as I got the call, I knew exactly what I was going to prepare for it (laughs). My own music is kinda melancholic, so I will be playing a lot more deep house and EDM and trap in my set. ■