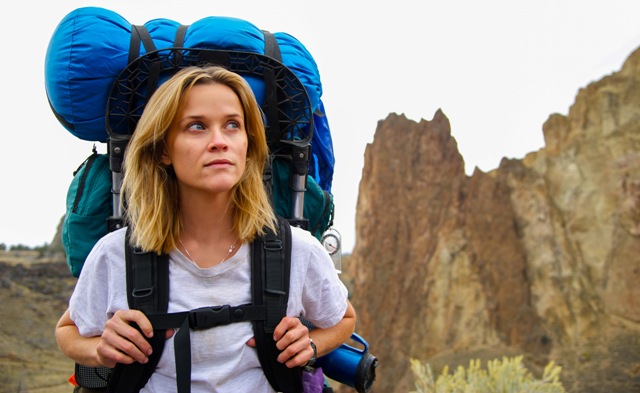 Jean-Marc Vallée’s Wild opens with the protagonist Cheryl Strayed (Reese Witherspoon) gingerly peeling off her boots at the top of a mountain. Having hiked nearly half of the Pacific Coast Trail with boots one size too small, her toes are now a bloody mess and the nail of her big toe has become almost completely detached. In removing the toenail, she accidentally sends her boot tumbling down the mountain. Cheryl then does something that happens a lot in movies like this: she screams into the abyss, literally and figuratively, as Vallée cycles through rapid-fire images of fire, naked bodies, screaming and pain.

You’ve seen this sequence before, because it’s one of the most popular shorthand images for desperation and self-realization in the film world — it’s also one of the most tired. It’s reliance on this type of imagery and emotional shortcuts that prevents Vallée’s follow-up to Dallas Buyers Club from being quite as effective as it was on paper. Strayed embarks on the three-month journey (the trail goes from Mexico to the Canadian border, though not always in total wilderness) to find herself and get her life back on track after the untimely death of her mother (Laura Dern), which led her to hard drugs and adultery and an eventual divorce from her husband Paul (Thomas Sadoski). Relatively inexperienced and powered almost entirely by emotion, Strayed nevertheless soldiers on for the gruelling three-month trek.

Vallée relies heavily on flashbacks and hazy imagery to convey Strayed’s inner monologue. Instead of blanketing the film in the expected obnoxious voiceover (it’s based on the real Strayed’s autobiography), he mixes snatches of internal monologue with lightning-fast flashbacks and unobtrusive voiceover in a fresh and organic way. One of his best ideas is to score the film using muffled snatches of AM radio staples meant to mirror the songs stuck in Cheryl’s head. Sometimes she starts to sing, sometimes the song fades in and out so much that only little bits of melody are discernable. It’s a surprisingly great way to exteriorize a character that would otherwise spend most of the movie grunting down a hill with a 65-pound backpack.

In that respect, Wild is a great vehicle for Witherspoon, who does better work here than she has in years, if not ever. While not exactly a dialogue-free, All Is Lost situation (she runs into people fairly frequently), Witherspoon nevertheless carries the film single-handedly, bringing both a bruised vulnerability and a fierceness to the role that she hasn’t had on-screen since Walk the Line. There’s no movie star in Witherspoon’s performance, none of the Reese Witherspoon that shows up in dreck like This Means War just because it’s bankable. In a season of strong central performances anchoring conventional films, she might be doing the most naked work of all.

Nearly all of Wild’s individual parts are great: it looks fantastic thanks to Yves Bélanger’s sun-bleached cinematography, Witherspoon is terrific in it and Vallée’s unconventional construction methods breathe fresh air into some of the more tired concepts. Wild’s problem is that it doesn’t overcome those tired concepts, it just works around them. The journey of self-actualization that Cheryl goes through is all Robert Frost quotes and vaguely hippyish breakthroughs (one of which happens at a wake for Jerry Garcia!). When she finally reaches her goal (I don’t think it’s a spoiler to say that she reaches a goal), it feels not so much like a transcendent triumph but more like an inspirational poster someone sticks in their cubicle. It didn’t surprise me one bit to learn that Strayed’s book was a favourite of Oprah’s Book Club — try as they might, Vallée and writer Nick Hornby can’t entirely scrub away the story’s gauzy, Reader’s Digest qualities. ■